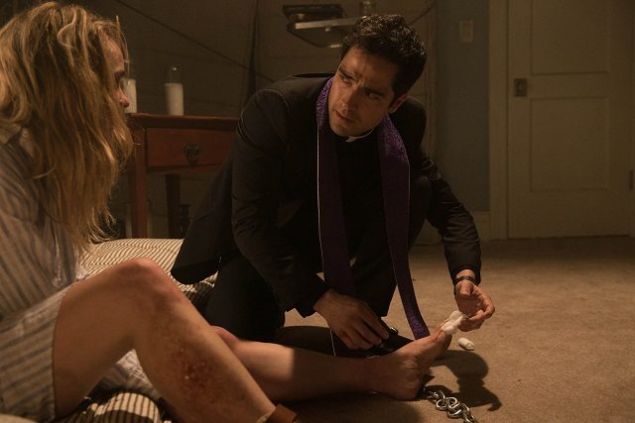 Hannah Kasulka and Alfonso Herrera in The Exorcist. Photo via Fox

Rewatching this episode on Hulu, a commercial keeps playing for the Outback Steakhouse’s Steak Towers, which consist of a steak stacked on top of a hash brown patty, and then either onion rings or shrimp erected in a vertical pile on top. It might be the funniest food ever, because, unlike any other dish before it, it makes the innocent mistake of existing under the assumption that a food item’s height is directly connected to its quality.

Much of the time, this show is kind of like the Outback Steakhouse’s Steak Towers. It thinks of bigness as an inherent strength, and it doesn’t know what it’s supposed to be selling you on. The Tower is probably delicious as fuck because it’s made of steak and fried batter and seafood with some kind of creamy sauce, not because it looks like one of those plastic poles toddlers stack differently-sized rings on.

The episode starts with Marcus drawing in his Bible– the forest where King Lear supposedly went mad, in his book of Revelations. Two days have passed, and Marcus encourages Tomas about his exorcism skills, saying he has a knack. So far we’ve only seen Tomas be terrible at dealing with demons, and Marcus is not the kind to MINCE WORDS because he is a freakin’ ROGUE PRIEST WITH A HEART OF GOLD, in case you’d forgotten, so it’s weird that we didn’t get to see Tomas do a good job between his earlier failures and a real doozy of a failure on his part that’s about to come (as it were).

Demon Casey, acting like normal, sweet, homework-loving Casey, asks Henry if he wants to hear a secret. She pulls him close with her chain and demon voices come out of her. Henry comes out looking stunned as Angela is looking through old photos. Outside, a literal storm is brewing as well.

Angela tries to clean up some damage on the ceiling and Henry looks like he’s about to pull her chair out from under her. According to the closed captions, Angela is listening to Gounod’s “Faust Waltz,” so the episode’s allusion game is really on-point.

Demon Casey taunts Tomas for having made up the story he told in a previous episode about his grandmother wanting him to be the first Mexican Pope. She says she absolves him of the sin of lying, then Marcus brings her to the ground and starts doing the loving forgiveness exorcism technique he learned from the nuns last week. It all feels very passive-aggressive, like two church ladies who have beef with each other saying, “No, I forgive you!”

The demon twists Casey’s toe around and says, “Isn’t it wonderful?” Henry asks if Angela has ever lied to her and insinuates that she has brought all this upon them somehow, which understandably upsets her. The demon talks to Tomas as Tomas’s grandmother, and Tomas flips out. Marcus tells Tomas to pull it together, then the demon starts knocking Casey around the room and talking about piggies. They tie her up.

Henry prays frantically, then starts looking through old boxes. He finds a Bible with a red feather in it. The exorcism and the storm have put both Angela and Henry in the spirit of looking back to the past, with Angela seemingly wanting to divert from and avoid the issue at hand, and Henry acting on some suspicion. It kind of feels like one of those Rick and Morty episodes where the A plot is this whacky adventure and the B is this over-the-top grim family affair.

The Salesman sits on Casey and talks about paradise being within his reach and says, “Bring her to me!” Kat talks to Angela and once again acts as the voice of reason in all this, trying to convince Angela to do the right thing– in Kat’s view, call the cops– when Marcus bursts in and is all like, “But what really is the right thing, maaan?”

The demon turns into Jessica and beckons Tomas. She beguiles him until he can’t resist anymore and gets on his knees. Marcus bursts in and Demon Casey says, “Just as I was getting ahead,” which if you have been reading these recaps you’ll know is very much my kind of joke. Marcus slaps her.

Marcus tells Tomas he’s compromised, causing Tomas to go do a sad John Cusack walk in the rain. Demon Casey as wholesome Casey tells Kat they’re torturing her and Marcus shoves Kat out of the doorway. To the Demon’s credit, between the two of them, the exorcists did just eat her pussy and knock her to the ground– it’s pretty hard to defend that as not just torturing a child. Even a true believer would have a difficult time saying that’s all the demon’s fault.

Tomas goes and gets to first base with Jessica, while Marcus has some more strong words for the demon. “You think she’s weak because she’s a woman? Pick on someone your own size,” he says, extremely male feminist-ly.

Marcus’s mom appears to him and tells him that his being born is what caused his father to murder her, that Marcus was the cause of all their problems. Tomas and Jessica bone down, about which Tomas feels a great deal of puppy-eyed guilt, but honestly? I know it’s breaking his vows and I know sleeping with unhappily married women is, like, not great, but the reason the demon was able to succeed in tempting Tomas was that Tomas had not yet acted on his feelings for Jessica, that he was just obsessively, blindly in love with her and horny for her. If they had already been together for some time, the demon could not have had the same success with “Hey, it’s me, your partner of many years. Uhh, it’s been a while, you wanna fool around?”

Kat calls the cops and the police arrest Marcus, which is oddly very satisfying because it makes more sense than anything else that’s happened in the whole series so far. Casey is taken away in an ambulance. She immediately destroys it and runs off. Bennett bails Marcus out and Marcus tells Bennett to warn the Pope.

Henry brings Angela’s old Bible to her and says she has to confess. She goes to see Tomas, who is wallowing in his own guilt, and she tells the secret we’ve been waiting to hear: she’s Regan from the original Exorcist. The demon appeared to her as a red bird. The trauma of the experience made her forget a lot of it. She pulled a Don Draper on everyone and started a new life in Chicago with a new name. Then Chris MacNeil from the original shows up at the Rance household. I’m guessing when The Salesman said, “Bring her to me,” he was referring to Angela/ Regan.

This episode succeeds because a) it’s crazy, but also because b) the show has spent so much time building up Tomas’s and Marcus’s flaws so the demon can exploit them. Even though the exorcism beginning means the show is really just getting started, it also felt like a resolution, so it’s good that Tomas is compromised and Marcus got arrested and Casey escaped– it blows everything up. I don’t really care about the show’s connection to the original, since the show was just finding its own voice, so Chris showing up feels like some kind of brand crossover or something rather than an exciting callback. I’ll see you next week unless a demon, using one of those floating cartoon “good smell” miasmas that forms the shape of a beckoning hand, convinces me to forsake my deadline and go to the Outback Steakhouse. 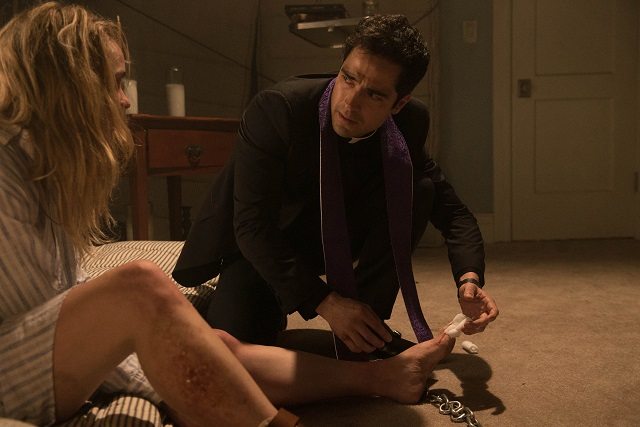