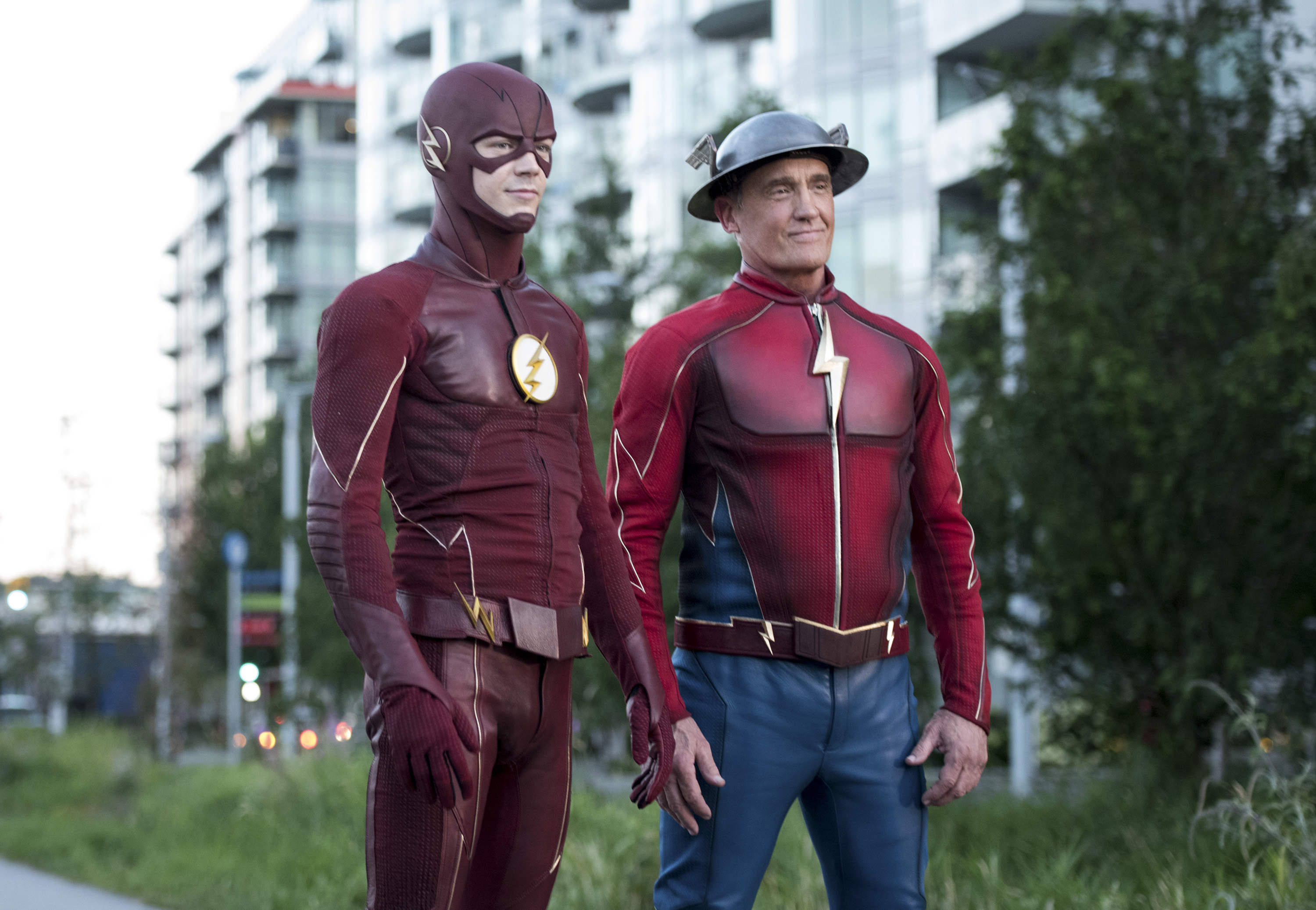 Given the target audience of The Flash—and The CW as a whole, really—it shouldn’t really be surprising that the solution to a universe-altering, time-warping, multi-dimensional schism in reality as we know it turns out to be a trip to the ’90s. And look, Draco Malfoy! IMDB tells me “Paradox” was written Aaron and Tod Helbing, but my millennial senses tell me it was written by the collective consciousness of everyone born in 1991.

So, believe it or not, the early moments of this episode involve Barry Allen heading back to the night of his parent’s murder again, because Barry Allen has basically become the dude that restarts the Xbox when he’s losing in Madden. Except, you know, the Xbox is the entirety of time and space, and the game of Madden is the lives of his loved ones. Either way, Barry didn’t get the timeline exactly right last episode so back we go. Luckily, Jay Garrick quite literally grabs Barry out of the Speed Force and directly into 1998, as illustrated by the Dawson’s Creek on the TV and for some reason Tom Petty’s “Runaway Train” on the radio (that song came out in 1987). No matter! It’s still a genuine treat to get national treasure John Wesley Shipp as Barry’s stern Uncle Speedster, who whips him into shape with advice that’s 80 percent heartfelt meditation on living with the consequences of your actions, and 20 percent this GIF:

Jay’s counseling, as he so eloquently demonstrates with a broken tea cup, basically boils down to “stop going backward in time to fix your problems.” The only true fix, both literally and metaphorically, is to go forward.

So what needs fixing in the first place? It’s nothing as major as the last Flashpoint Barry created; the universe isn’t collapsing or, worse, Cisco isn’t wearing that greasy-ass billionaire pony tail anymore. But there are some problems, for sure, some larger than others. Over in Arrow-land, John Diggle’s daughter Sara is now John Diggle Jr., which is worrisome if you care about erasing people from existence, plus Iris and Joe West don’t talk anymore (that seems major, but it’s resolved by episode’s end pretty much because “Oh, we’re being silly, aren’t we?”). The big problems here are A) Barry now works with a cantankerous as hell “Metahuman Specialist” named Julian Alpert (Tom Felton, in all his sneering glory) and B) Cisco’s brother Dante was killed by a drunk driver, and Cisco resents Barry for not going back in time to stop it.

Let’s start with Cisco, who we’ve never really seen played this sullenly by Carlos Valdes. But I think it strikes the perfect tone between the irrationality that fuels pretty much all characters on the CW (it almost destroyed Arrow in season 3) and the real-life irrationality of someone who loses a family member. Because it would be real easy to mock the way Barry lays out the very real dangers of messing with time and Cisco, usually the analytical one, basically responding with “Nope, don’t care.” But that’s also real, man, surprisingly real for a show like The Flash. When someone you love dies you would alter the universe if it meant getting them back, consequences be damned. Cisco’s descent into darkness, and eventual return to the nickname-bestowing light was one of the best-handled aspects of “Paradox.”

That does not mean I forgive this show for breaking out the old “character needs a dry erase board to spell out a complicated plot point” trope, especially when it could have been so simple: 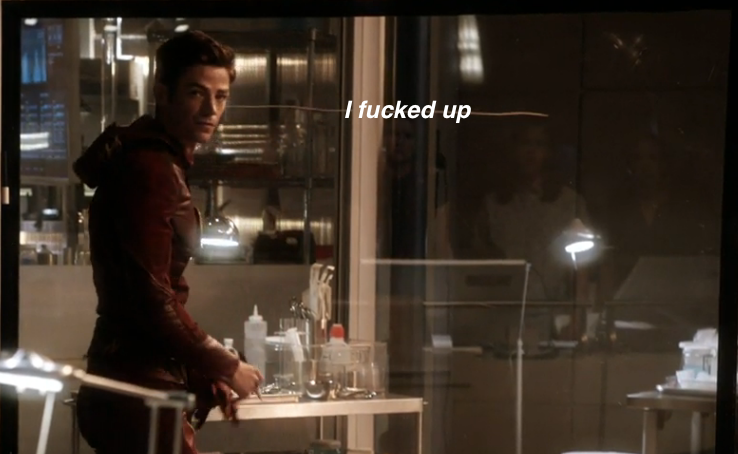 As for Julian Alpert, we don’t know much about him besides the fact he’s British, really doesn’t trust Barry Allen, and is absolutely ripe for a recruitment from the season’s Big Bad, Doctor Alchemy. But he does introduce an intriguing story-point; there are skin husks being left around Central City, which is about as disgusting as it is gloriously comic-booky. Not as disgusting as Edward Clariss’ Rival costume, which continues to look like Etrigan the Demon had sex with the Creature from the Black Lagoon, but disgusting nonetheless.

Speaking of, Rival is back, and thanks to the plotting of Doctor Alchemy he has his speed and his memories back. The climactic showdown between Barry and Clariss is a large bit of nothing, really, because it’s basically the same fight as last week minus the cool-factor of Kid Flash, plus after three seasons I still don’t really understand why Speedsters always need to run around the city when they fight (besides, you know, CW’s budget). Even so, I can’t deny the moment Cisco, powered by pure friendship, dawns his Vibe gear to deliver a team-Flash-kicking to Clariss was, in Cisco’s own words, “pretty  bitchin'”.

Where does that leave us, in this post-Flashpoint universe? Besides the skin-husks and metahumans popping up thanks to Doctor Alchemy, pretty much square one. Everyone is friends again! Barry and Iris kiss for the first time, for the third time! And yeah, that’s frustrating from a pure narrative standpoint. But dammit, it’s The Flash. This team, these characters, these relationships, this is the way it should be.

Yupp, back to normal. Although maybe grab a coat. It’s just a bit frosty all of a sudden. 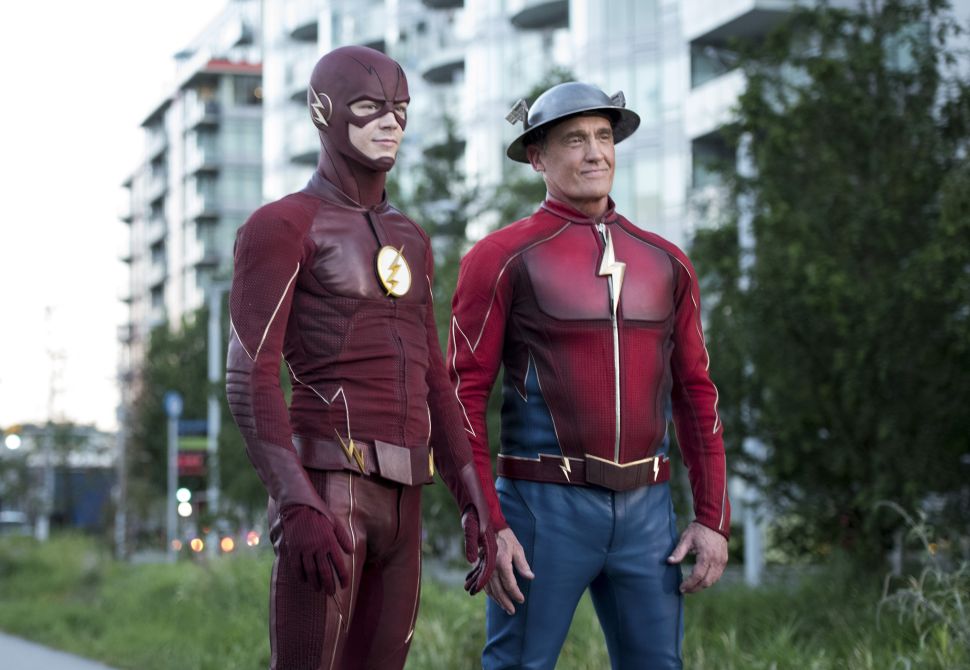