Now, there’s a couple problems here, the first being that those are two things, Barry. But the second, far more all-encompassing issue is that it’s true, some things in life really don’t happen unless we force the issue. Asking your childhood crush on a date in a coffee shop is one example. Running backwards in time to stop your mother’s murder, therefore altering the trajectory of all time and space as we know it is another example. And therein lies the issue; Barry Allen is equating one with the other. The first half of “Flashpoint” is concerned with watching Barry, who we know to be very, very smart, trying his darndest to justify what is clearly a very, very selfish decision.

I mean, I suppose it could be worse. Geoff Johns’s “Flashpoint” event of the comic books was so catastrophic it altered the DC Universe for years, gave way to the across the board moody New 52, and the publisher had to drag Alan Moore’s omnipotent Doctor Manhattan into the fray just to explain the dang thing (for his part, Alan Moore responded by angrily casting a spell in a cottage outside Northampton, England). Episode writer Brooke Roberts, playing off a story by exec-producers Greg Berlanti and Andrew Kreisberg, does the exact opposite; “Flashpoint”, for the most part, is a return to the lighthearted jauntiness that was season one’s trademark, that the show largely lost in Season 2: Arrow But With Lightning Bolts. Yes, this comes along with the layers of cheese The Flash so often melts over painfully on-the-nose dialogue (over-under on how many iterations of “Some people are just meant to meet” we get in an hour). But story issues aside–and oh boy, are there issues, and we’ll get to that–there’s a lot of fun to be had in this alternate timeline while it still exists.

Case in point: Carlos Valdes is having the time of his damn life playing Cisco as the tech-billionaire owner of Ramon Industries. Think Jesse Eisenberg’s Lex Luthor from Batman v Superman: Dawn of Justice, but entertaining instead of the absolute worst. The moment Cisco testily misses a layup is one I will treasure for years to come:

Then there’s Wally West as don’t-call-me-Kid Flash and his ongoing feud with Edward Clariss, a speedster who labelled himself The Rival to prove he has “no rival”, which doesn’t make a ton of sense. But that’s okay! Keiynan Lonsdale is charming as hell as Wally, and sells the fact that an inexperienced, hotheaded Flash wouldn’t do much more than blaze around with one enemy in a super-powered game of one-upmanship (although I did laugh when someone in the police department yelled for, like, the third time “Ohhhh Kid Flash and Rival are at it again!”).

But again, this all blur-circles back to Barry, who is navigating this with the optimism of a dog in a burning house. Which is why when the premiere turns dark real fast, it’s jarring. I mean, there’s no way around it — this episode effectively ends with Barry murdering his own mother. It’s Eobard Thawne who holds the knife, as it was the first time and always will be, but Barry course-corrects from Flashpoint by letting it happen. The path Barry takes to that decision is so quick, though, it almost doesn’t feel earned. To be fair, he says it himself: “Speed has always been my problem.”

But this is a problem. True, the universe kind of forced Barry’s hand–Wally was on his deathbed after the climactic battle with Rival, and Barry was losing all memory of his former self, powers included–because of course of you fuck with time, time fucks with you back. I learned that from James Franco. But that’s a momentous choice to make, to willingly stand there as your greatest enemy kills your mother, that Barry processes and decides over the course of about three scenes and a few hugs.

Of course, Barry and Thawne don’t return to a completely unchanged timeline. For one, we get a brief, faceless introduction to season 3 big bad, Doctor Alchemy, voiced by Jigsaw himself, Tobin Bell.

Completely unrelated to this episode, but in the earliest appearances of Doctor Alchemy he used a magnetic light called Elemento to send The Flash into space, a plot point I fully support The Flash copying with minimum to zero changes.

But the real changes here are more emotional than grandiose; Wally is alive, Joe and Barry are back on speaking terms, but for some yet-unknown reason, Iris and Joe aren’t on speaking terms. That’s a small change that effectively shatters the universe of both The Flash and The Flash. Barry ended season 2 by changing the entire world, by creating Flash Point, all because of a parental connection he never had. Now he not only understands that he could alter time itself and still not have that connection, but in trying he’s doomed Iris to that same burden. Make no mistake, I do not want a return to the brooding of The Flash at it’s doom-and-gloomiest last season, I do have to give kudos to the weight Grant Gustin puts into Barry’s final line here: “Oh God…what have I done?”

I know two things about life, and it’s that what Barry did was mess up very, very badly. 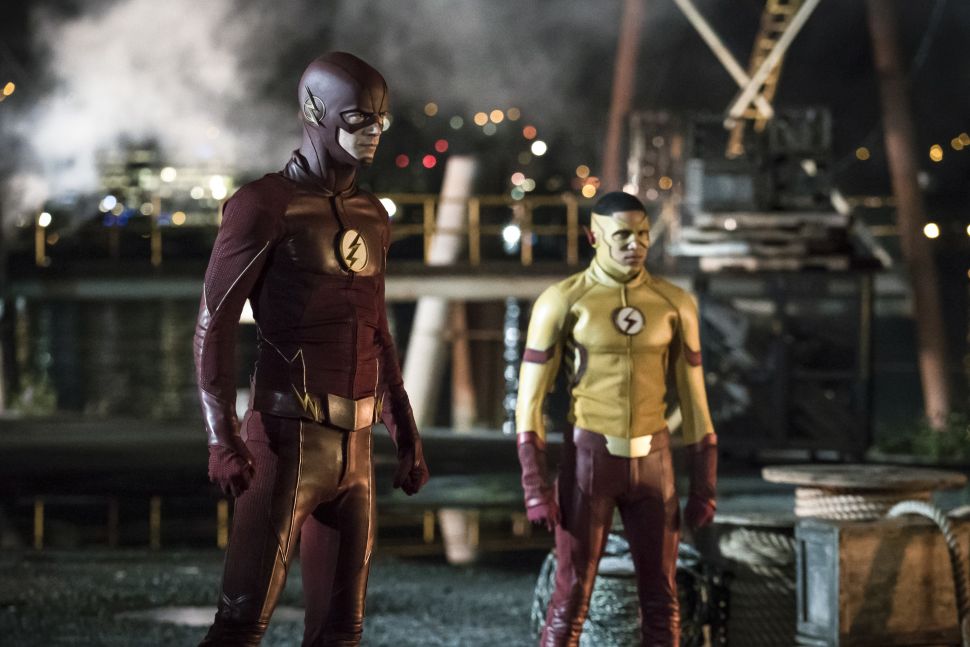 Filed Under: Entertainment, TV, The CW, The Flash, ,