Old Hollywood met new Hollywood this weekend on SNL when Kate McKinnon killed in a well-played skit about those women-oppressed-in-film roundtable that have become my bread and butter at festivals from Woodstock to the Hamptons. (We’re amazing! We’re underdogs! Daddy, it’s just not fair! “Let’s pivot.”) And this shift to wry female-focused humor has reinvigorated the show itself.

How funny was McKinnon as Debette Goldry, an old school Judy Garland meets Debbie Reynolds star paid in brooches? (“They tried to teach me to read once by putting peanut butter in my mouth and then they remembered that’s how you make it look like a horse is talking so they gave the part to a horse.”)? It almost made one nostalgic for the good old days when a producer told a star if she had sex with him she’d get the part – and then she really got the part! “It was a fair trade,” said McKinnon. “That’s Hollywood, baby.”

We’ve come a long way, baby, but we’re not equal yet.  in this confusing moment four decades after “I am Woman, Hear me Roar” we’re still trying to get those A-list gigs that aren’t just, to quote Margot Robbie’s Keira Knightley, the “beautiful girlfriend, the beautiful mother.” And raise the consciousness of an industry in the death grip of white men in beards and baseball hats. And, yet, the skit skewers a movie star who earns $5 million dollars per movie kvetching about pay inequality.

Between that viral actress roundtable sketch, McKinnon owning the joylessly grinning Hillary Clinton as the embattled female candidate who must be POTUS in a debate sketch opposite Alec Baldwin’s tangerine Trump, and the parody where Leslie Jones seeks out hacker Mr. Robot to identify the nude leaks from her creaky computer, women’s issues owned the show.

The biggest change is how much these new power players can foreground women’s stories in the year of the woman president – and laugh at the many ways that women fuck up and fuck themselves over on the road to world domination. (Mwah!)

It’s no coincidence that both McKinnon and Jones came out of the inferno of the Ghostbusters estrogen reboot, the movie that launched a million manic trolls – and needed to be so much better than the original if it was going to succeed. (It wasn’t.)

Not only did starring in Ghostbusters bump up the respective profiles of McKinnon and Jones, who now have a higher rate quote and movie star creds, it also united them against real and ferocious antagonists from the studio second-guessers at Sony to the guy crying in his mother’s basement that this reboot pissed on the sanctity of the original.

If something as mundane as putting women in men’s roles – a trope that’s older than Shakespeare’s comedies – inspired such a virulent reaction, maybe it was time to be more direct in the criticism and the humor. The male backlash had an opposite effect, radicalizing the mad-as-hell McKinnon and Jones and freeing them to greater satiric heights.

Meanwhile, in the writer’s room, it’s no longer one lone female getting coffee and giggling at the guys’ jokes.  Sarah Schneider’s promotion to head writer from her humble beginnings at College Humor, and the recent addition of Anna Dresden, Joanna Bradley and Kristen Bartlett make for a muscular writing team competing for air time. Their humor bubbled up in the Hollywood sketch when Cecily Strong’s Marion Cotillard cautiously suggests that the solution to better roles for women is hiring more women writers. In response, McKinnon snorts: “Women writers? You’d have to teach them to read!”

While there have always been smart women and great moments of female humor on SNL, from Jane Curtin’s classic point-counterpoint debates opposite Aykroyd – “Jane, you ignorant slut” – to Gilda Radner’s inspired Rosanne Roseanneadanna–this season the women are really cutting loose and owning the show.

Thank, SNL. I am woman hear me roar – with laughter. 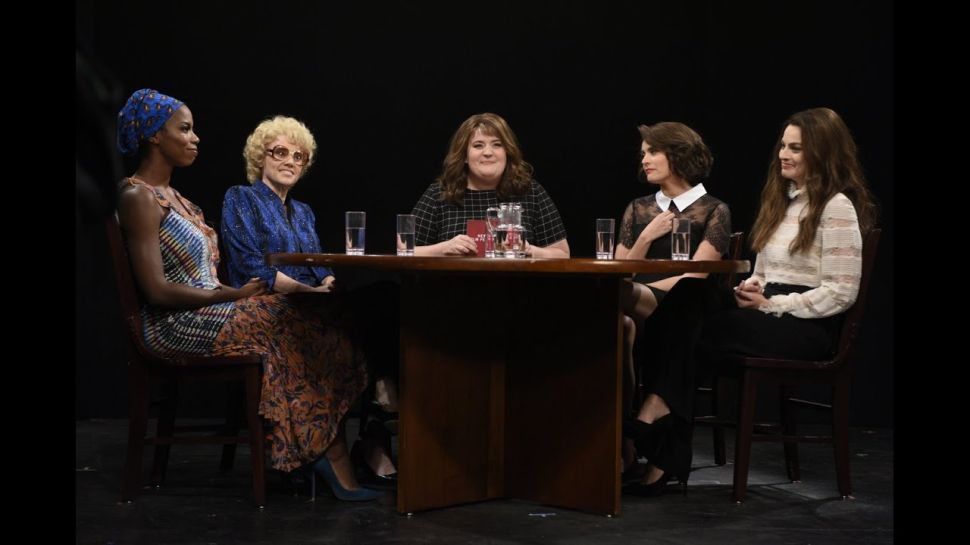