Luke's Diner is popping up everywhere. Follow the link in our bio to find a Luke's near you! #HappyBirthdayGilmore

The guys at Blackrock in Midtown were pretty shocked when they went to grab their morning lattes from Ground Central Coffee only to find their usual coffee joint with a line three blocks long, mostly composed of women in their 20s and 30s. Was it a pop-up SoulCycle warehouse sale? Was Ryan Gosling giving an impromptu poetry slam? Nope it was something better.

Their beloved coffee shop had been transformed into Luke’s Diner, as in the regular stomping ground of Lorelai and Rory Gilmore, yes the Gilmore Girls. If you aren’t familiar, Gilmore Girls was a show that aired on the CW from 2000 to 2007 and will be coming back to Netflix on November 25 for a four-part reboot called Gilmore Girls: A Day in The Life. Though it was never a ratings hit, the mother/daughter comedy developed a devoted following; it’s almost 10 years later and women are skipping out on work (or maybe SoulCycle) all over the country to stand in line for cup of coffee from Luke’s. Where they lead, everyone certainly will follow.

Today, in celebration of the “Gilmoreversary,” the day the show first aired in 2000, coffee houses in every state got decked out with all the Luke’s Diner essentials (so a No Cell Phone sign and some cups, basically.) Luke’s Diner was the hub of the show and where the two ladies ate almost all their meals (if they were home, it was usually Pop-Tarts and/or salad out of a bag), drank gallons of coffee and where Lorelai and Luke had hours of will they/won’t they sexual tension.

This is not the first show to recreate the local hangout of a hit show, but it is definitely one of the biggest. A few years ago Central Perk Cafe of Friends fame opened up in Soho and Toronto is actually getting a Seinfeld-themed pop-up bar. What is it about eating, drinking or just sitting at these recreations of beloved, but fictional characters that gets people so excited? Crowds from afar still surround Magnolia Bakery in the West Village, after that one scene on Sex and the City where Miranda and Carrie decided to have cupcakes instead of cosmos (to be more current, Broad City also filmed a scene there.) The bar Cheers is based on in Boston is still attracting fans, and that show has been off the air for 25 years! Does eating the food and drinking the coffee of our favorite characters make us feel like we are part of the show? Or is it something else? Aly Keves, the Realtime Social Editor for The Daily Dot and host of the pop culture web series The Geek Awakens, says it is more the nostalgia. “Central Perk and Luke’s bring back all of these great memories of shows that I love and still watch (probably too often.)”

There is a comfort to watching shows we grew up with. I am as big a fan of the latest Hulu, Amazon or Showtime endeavor, but if I am stressed, sick or tired, it is those shows I watched as an adolescent that are my standby, even if I have seen them a hundred times. Apparently I am not alone. Re-watching movies and shows is a form of self care, according to a 2012 study by Cristel Antonia Russell and Sidney J. Levy. This is what the researchers call “Repeated Hedonic Experiences.” Our favorite shows are predictable, they are calming and they give us some order in our otherwise chaotic lives. One study found nostalgia can actually provide physical comfort in the form of warmth. When Gilmore Girls was on TV, life was a lot more simple, at least for me. I wasn’t thinking about money or rent or five-year-plans. My biggest worries were math tests and getting the right pair of flared cargo pants from Abercrombie & Fitch (though at the time, all that seemed quite stressful.) Re-dredging gives us access to memories we find pleasing and for the cost of one Netflix subscription, that ain’t bad.

So if sitting on the Central Perk couch, drinking a cup of Luke’s Diner coffee or sitting in a row boat on a man-made Dawson’s Creek (fingers crossed for that last one) makes me feel good, I’ll take it. 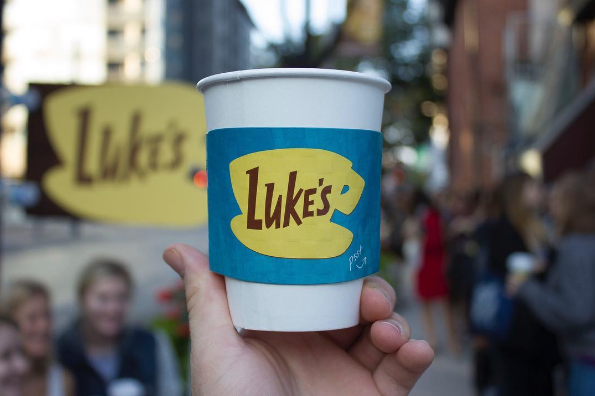