I’ll just come right out and say it: The Real World is the best show that has ever been on television. And it’s only getting better. It has reinvented itself so many times over its twenty four years and continues to improve on it’s Ex-Plosion & Skeletons format of thrusting strangers together and then bringing in antagonists from their past. By opening up the scope of what is allowed on camera, showing producers, crew members, and a bit of the behind-the-scenes run of show, they’ve managed to reinvigorate the franchise. We always knew this was a television show we were watching, why pretend that it isn’t? We live in a world of post-show podcasts and online journalism where people come off these shows and reveal all. So why not embrace that? Give the people the content they demand.

And that comes into play big time this week as we see the “bad blood” assembled in Portland, about two hours away from The Real World house in Seattle, thinking that they were about to embark on their own new MTV show. Could there have been a better moment than Jenn, who is DJ Masserobbie’s ex-girlfriend, finding out that they are the twist? I thought her jaw broke from the impact of it hitting the ground. I mean, we all knew it was going to be a scene because da gawd Producer Matt showed up and he is more savage than that half-wolf half-man with abs from “Altered Beast.”

The seven original roommates are on the beach enjoying a camp fire with strangers, burning pieces of paper with their dreams and fiery passions, which by the way if they asked me to write down my passions I’d just print out the last three years of my The Real World recaps and burn those because this is all that I care about anymore. They’re living the good life and it’s all about to come crashing down. The thing is—you can’t go on The Real World nowadays and not be aware that there is always a possibility of a twist. Ty and Theo tap into this when they play a prank on the roommates by taking a couple of suitcases lying around the house and write “John Room #4” on them and leave them out in the hallway to be found. It works and everyone freaks out. Nobody evens bothers to open the suitcases, which are empty. I mean if they were real, I guess it’d be creepy to open someone’s suitcase and go through it but also what if there’s a clue in there? See? Great prank. Theo gives Ty this smooth around-the-back handshake which I will absolutely use if I ever do anything cool ever again. So while he roommates are all freaking out about prank new roommates, we’re seeing the actual new roommates being assembled. MTV Production at its finest.

Now, here’s an even more beautiful set-up. Katrina’s sister, Anna, is her bad blood. But they’ve been speaking and video chatting since Katrina has been in the house. Anna has virtually met the people already in the house. She thinks she’s going on another show but knows it’s possible they were going to throw her onto The Real World because they show her being relieved when Production tells her she’s going to Portland instead. Here’s why this is incredible. First, we keep hearing that her and Katrina don’t get along. But they still talk a lot. They’re always texting or chatting. So they are in contact with each other. Now, imagine a reveal where everyone else’s worst enemies are assembled and you show up and find out that you are the bad blood of someone too—your sister. Huge. My thought process: how am I your bad blood bro? We talk five times a day? Really? It’s really me? I’m your worst enemy? Thanksgiving’s gonna be super awk this year.

Second. Anna has the tea on the roommates because she’s talked to them. So when all the bad blood is rounded up on their Winnebago trip—nice shout out to Road Rules by the way—everyone only knows their enemy. But Anna can speak on everyone. She already calls Ty a bitch. This is important because it strengthens the divide. The original roommates always say they’re going to stick together. And the bad bloods always do the same. But we never see it from the side of the bad bloods, because we don’t see them until they’re in the house. This double perspective adds a lot of tension to the meeting. It also allows us to hear both sides of each storyline, so we’re not as biased towards the originals.

The other newish renovation to The Real World is that they’re no longer cut off from the world. Last season on Go Big Or Go Home, they were actively searching themselves on the internet as things got out about production. One houseguest even leaked info on his roommate being racist and homophobic. This year, there’s been more cell phones than I’ve ever seen. Lots of selfies and snaps and you could probably even follow along (minus some spoilers) while they were filming over the summer. The technology aspect is super interesting because it basically turned everyone into super sleuths about the twist. Anna’s location posted on some social media app saying she was flying from one city to another, the same route Katrina took. Jenn posted something with her location on, which allowed Robbie to see she was two hours away. Normally, you’d want to keep the idea of a twist hidden. But watching the paranoia is even more enjoyable than it being a complete shock. They still don’t KNOW, but they “know.”

And look, my love for this show does not mean that I don’t find the behavior repulsive sometimes. Like Mike taking Anika’s stuffed animal and putting it over his junk so that when she sleeps with it, he knows where it’s been and can be thrilled about it. There’s no condoning this. Peter, Mike’s bad blood, who by the way says he bartends at Thunder Jacksons, a bar I’ve walked past one million times in Soho where you used to be able to buy a 40 from the bar, well Peter says Mike is not a good dude. The puzzling thing about the bee incident, and let me say strongly that there wouldn’t ever be a “good” reason for it, but the strange part is the complete lack of context for it. As far as we know from what we’ve seen, Mike and Anika get along. Or at least, there was no fight shown. There was no “I don’t like this person so I’m going to clean the toilet with their toothbrush Big Brother season 2” moment. It just kind of happened out of nowhere during the episode. It’s random and horrible. Could it come back around later on? Very possible.

One thing is for certain, the bad blood is real and we’re going to get to watch it. Theo’s cousin, Kassius, who according to Theo is the reason he lost his D1 scholarship came out the gate with “he’s my son, he came out my scrotum.” That’s the starting point. That’s the tip you’re going to enter the house on. Ty’s bad blood, Kimberly, says that Ty’s British accent is fake. I mean that is a plot point that I need to see play out. She didn’t have the accent in high school. Maybe. We don’t know. I need to know. I really want to know. This is very important for me to know. A fake-accent The Real World scandal is too good. Ahhh, this show.

Next week is the big reveal. The walls are literally going to come down, because there are hidden bedrooms for the new roommates. Sometimes the perfect metaphor is hiding in your own house. 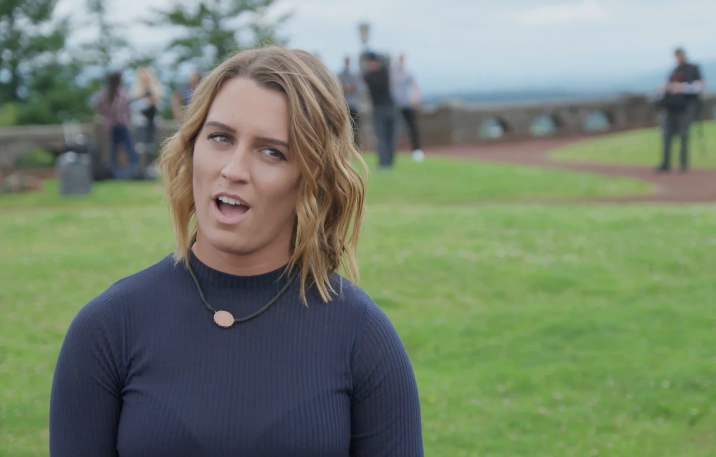