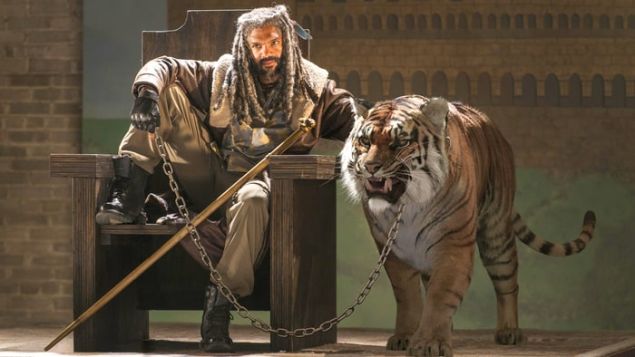 Ezekiel and his tiger (which is not a zombie…as far as we know?) Photo via AMC

Welcome back! Great to see you—all four of you who are still watching after last week’s torture-fest. Ah, who’m I kidding, there are still bazillions of you. If The Walking Dead is banking on anything these days, it’s that its viewers are gluttons for punishment. It set out intentionally to break the spirits of its audience along with that of its protagonist, and we just whined about it for a few days and then said, “but I can’t wait to see what happens next!”

What happens next is that we (mostly) ignore the horrifying Negan storyline for a week, in order to catch up with everyone’s least favorite odd couple, Carol “world’s scariest soccer mom” Peletier and Morgan “but the Buddha hates murder” Jones.

When last we saw Carol and Morgan, he was breaking his dumbass vow of nonviolence to save Carol’s life from a Savior, and then they in turn were saved by two dudes wearing body armor and riding horses. Turns out that the armor and the horses aren’t just random weirdnesses—these men are quasi-knights of a community known as The Kingdom, which is basically just a more advanced version of Alexandria with some light medieval elements sprinkled on top.

Primary among which is its leader, who styles himself King Ezekiel. This dude talks like he learned to speak English from reading the King James Bible, wears a sword on his hip and a feather in his dreadlocks, and keeps a pet tiger on a chain. He leads The Kingdom as a benevolent monarch, making oracular pronouncements and depending on his people’s devotion to run a remarkably tight ship.

Two things become abundantly clear: First, that Carol thinks this whole thing is a ridiculous, sick joke being played on Ezekiel’s subjects. She wants nothing to do with it and intends to gtfo as soon as she can recover from her wounds. And secondly, that the joke is on her, because this place is real, and it works, and she’s just shooting herself in the foot for no apparent reason except her own need to be defiant and depressed.

Isn’t it weird how in about half a season, Morgan and Carol have gone from being two of the show’s most interesting characters to two of its least? It’s like the writers decided to boil each of them down to a single character trait and then just wound them up and let them go about their one-note business while the plot concentrated on other things.

There is zero going on with either of these characters that this episode makes us want to care about. Morgan teaches a kid named Ben how to fight with a staff and sort of bonds with him and sort of admits that maybe sometimes you’ve got to kill someone every once in a while. And Carol just does another version of her “I’m just a sweet li’l old lady” routine to hide the fact that she’s a stone-cold badass. But where before this trick of hers was subtle and interesting, now it is over-the-top and stupid, most obviously because she is using it to fool people who don’t really give a shit if she is sweet or badass; they pretty much just want to help her out. The whole need to disguise her true nature is all in her head here.

Not that there aren’t some slightly sinister aspects to The Kingdom, of course, mostly in the way of seeming too good, pure, and nice to be true. There’s something off about the way Ezekiel insists that young Ben will one day be an important part of his court; Morgan wants to believe it is just penance for the king getting Ben’s father killed, but it seems like something deeper and more off than that. And of course there is the symbolism of Ezekiel repeatedly trying to get Carol to eat a pomegranate, a reference to the Persephone myth that at least makes the suggestion that The Kingdom is some version of hell.

But overall, Carol’s resistance just seems to be for resistance’s sake. She’s made up her mind that she’s going to lone wolf it from here on out, because she needs to live in the real world, the harsh, unforgiving true existence of the apocalypse, rather than the pack of lies that every society has to tell itself to keep going. And this one is the worst pack of lies of all, of course, with its fake monarch and gnomic proverbs about putting back in the well what you take out of it. Carol thinks that lies get you killed, eventually; the harsh truth is all that can save you. But that principle, once sensible, has become little more than a hair shirt for her by this point.

So I can’t really bring myself to care or understand why Carol’s eventual decision is to leave The Kingdom but to hover right outside of it, setting herself up just beyond the gates in some kind of rectory with a cemetery in the yard. It’s supposedly the solution to some inflexible rules she has set for herself (or some riddle that Ezekiel has posed to her), but the rules are dumb and don’t make enough narrative sense to make it worthwhile to try to figure them out.

King Ezekiel, on the other hand, is endlessly fascinating, not only for his ridiculous theatricality, but also for his reasonable and simply wise explanation of why and how he took up this fantastical role. The how, of course, is the tiger, Shiva—he was the zookeeper who saved her, and once he had a pet tiger in tow, people started naturally treating him like a larger-than-life leader. A role that he willingly accepted once he realized what he could do with it, what he could build with it.

(Also, a special shout-out to Jerry, Ezekiel’s rather dim-witted steward, who is adorably incapable of mirroring his monarch’s highfalutin language. The king’s slight exasperation every time Jerry responds slangily to his lofty pronouncements is one of the tiny joys of this episode. And even dumb Jerry, who we’ve just met and know nothing about, is more interesting than Carol here.)

TWD plays lightly but deliberately on the obvious comparison between Negan and Ezekiel—both charismatic, theatrical, clever leaders who know that their power derives solely from the devotion of their followers. (And let’s not forget that the classic eeny-meeny chant invoked so murderously by Negan involves the catching of a tiger by his toe.) But where Negan seems to genuinely enjoy the terrible things he must do, the responsibilities of leading sit rather heavily on Ezekiel. Whatever darker doings are afoot in The Kingdom, we believe him when he says that keeping secrets from his people is a burden rather than a privilege of kingship.

The secret, of course, is that The Kingdom is not actually an independent nation, but is also subject to the Saviors, owing them a weekly tribute just like The Hilltop (and now Alexandria). Lest you thought some of this season was going to be devoted to a less grim storyline: nope, in the end it’s all about Negan. There is some dissent brewing in the Kingdom’s ranks, though, as one of Ezekiel’s knights deliberately fattens their donated tribute hogs with the flesh of walkers (will that poison them? Or just taste really bad?) and eventually takes a swing at one of the Saviors. Some of them obviously want to fight back, but just like Rick, Ezekiel knows they have no chance against an army of that size. But—not to give you any false hope in this hopeless world—it certainly does seem like a Kingdom-Hilltop-Alexandria team-up is in the offing, somewhere off in the very far distance. 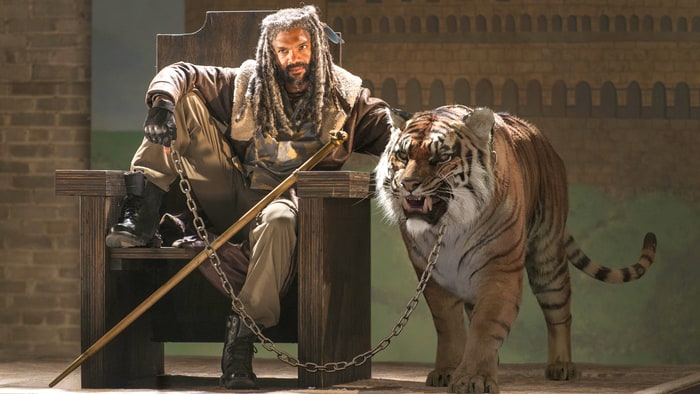