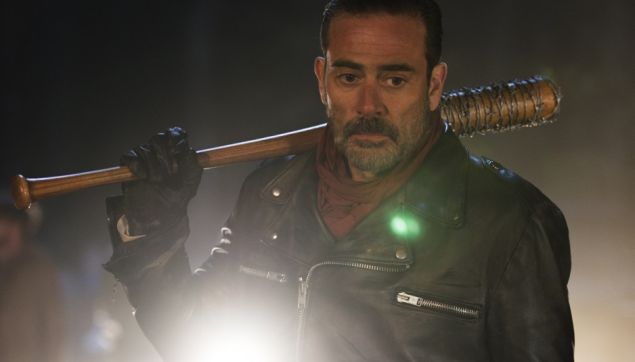 Whoa, OK. How we doing, guys? You alright? Maybe sit down for a bit? Take some deep breaths. We’re all gonna get through this.

Yeah, so that was as brutal and wrenching an hour of television as we’re ever likely to see. And it had to be. Because the point of this season 7 premiere was to show Rick—and by extension us—that nothing is ever going to be the same now. Just like the zombie apocalypse came and changed everything for everyone, the lives of our heroes will now be divided into the era before they met Negan in the woods, and the era after it.

That’s a bitter pill to swallow, and one that requires some pretty dreadful methods on Negan’s part (and some dreadful scenes on the showrunners’). To show to Rick, to make him know in his bones, that this isn’t just some new challenge he’s going to find a way to overcome. To convince him that the era of his ascendancy, the years of heroic survival and the peace of Alexandria, is all over now.

I wasn’t much of a fan of the eeny-meey cliffhanger that ended season 6, but I have to admit that this was a killer of a premiere. Instead of just opening with the murder right off the bat (sorry)—or, as I feared they might, delaying it to the end of the episode (or even into the next episode) just to ratchet up the anticipation more—the episode treated the revelation of Negan’s victim(s) in exactly the right way, embedding it in precisely the story this episode really needed to tell: How Negan could possibly get someone as strong and fiercely independent as Rick to knuckle under and become his servant.

So we opened on the confrontation between a devastated but still defiant Rick and a wry and calculating Negan, in the wake of the latter’s horrifying actions. Negan knows he has to get Rick to stop having “that look” in his eye, to stop saying “I’m going to kill you. Not today, not tomorrow, but I’m going to kill you,” and start saying “I’ll do whatever you want. You own me.” And once he does, as the leader, his people will fall in line after him.

So he puts him through his paces, putting a hatchet in front of Rick and daring him to use it—like that would really help anything, as even if he managed to kill Negan, the Saviors would just kill him, his friends, and everyone in Alexandria. Then Negan throws the axe out into a pack of walkers and tells him to go get him back “my axe,” and Rick has to fight his way through, weaponless. And so on.

The point is to show Rick that he really has no options left. He can’t fight Negan, he can’t just give up in despair, he can’t really even bide his time and wait for an opening. Everything short of pure servitude ends up with more of his friends dying in awful ways.

Because these scenes of Rick’s various trials are interspersed with flashbacks, first quick little vignettes of various team members, and then the scenes we’ve been waiting for. Negan finishing his eeny-meeny and picking his victim: Abraham. Who goes out in awesome Abraham fashion, telling Negan to “suck my nuts” after the first blow caves part of his head in.

And in case we were wondering whether the camera would look away from the visceral brutality of a man being beaten by a barbed-wire-wrapped baseball bat—it doesn’t. I don’t know why I thought that a show that has zero compunction about showing walkers literally eating the faces of people we’ve come to love would shy away from this level of violence, but it was still shocking to watch. Perhaps because I don’t believe in zombies, but the idea of someone using a bat in this way seems far too horrifyingly real.

There will be some debate in the interwebs today about whether it was necessary to show this, and some people will inevitably declare that this was a step too far and claim to be done with The Walking Dead. I can’t say I’d blame them, but at the same time, if the purpose here is to maintain our identification with Rick and our other heroes, then traumatizing us as watchers, really going for it and making us feel the horror, was the way to go. Maybe that’s not what you want out of your television shows, but at least we can say that TWD is clear and pure in its intentions.

Of course, it also felt a bit too easy, right? In many ways, Sergeant Moustache was the obvious choice. He was the outwardly strongest member of the group, and the one with the most defiant look in his eye, making him the clear option for Negan to both eliminate from the group and make an example of. And for the writers, he was a beloved enough character to be at least nominally worthy of the cliffhanger, while not quite being a core member of the group whose loss we’d be devastated by. If you were like me, your thought process was something like “OK, that’s awful. Sad to see him go. Good choice, I guess. Let’s move on.”

Which is why what comes next is so utterly heartbreaking. Daryl loses his shit a little bit and tries to tackle Negan, and in retaliation, Negan has to make another example of someone.

The selection of Glenn is the episode’s gut-punch. It’s the perfect choice, and also perfectly devastating. Glenn’s been with us since the second episode of the season (the only remaining member of the original cast, in fact, except for Rick and Carl). He’s the soul of the group in many ways, the character with arguably the most compelling arc, one-half of the show’s best and most enduring romantic relationship, and a father-to-be. This is cruel, and it is perfect.

And even more cruelly (and less perfectly), we again see the horror of death in vivid detail, as he struggles through blood and obvious brain trauma to say goodbye to Maggie. “I’ll find you,” he says, before Negan delivers 20 more coups de grace.

Back in the present, Rick gathers himself enough to get the axe and bring it back to Negan. But the show still has one more trial left for him.

For several seasons now, TWD has been pretty thick with Biblical references, but they’ve never quite gone this all-in. Because Negan’s last task for Rick is a direct parallel to the final test of Abraham in the book of Genesis: ordering him to bind and sacrifice his own son, Isaac. Here Negan does the binding, tourniquetting Carl’s left arm and ordering Rick to either chop it off with his axe, or watch the Saviors shoot all of them dead. And this is Rick’s breaking point. He agonizes, knowing there is nothing he can do to stop this but unable to actually follow through, and then—encouraged by Carl, who grits “Just do it, Dad”—raises the axe, and is stopped at the last second by Negan.

Which is exactly how the Genesis story ends: An angel descends and stops Abraham’s knife before he kills his son. It was all a test of loyalty and devotion. And Negan’s point is clearly made. I am your god now. I literally own you.

Then they take Daryl as insurance and just drive away. Because the Saviors never had any intention of keeping Rick & co. as captives. They’d rather have them as servants, living their lives and working for them.

The quiet aftermath is almost as wrenching as the attacks themselves, as our heroes finally have a moment to reflect on how completely everything has changed. Except for Maggie, whose bereaved mind can only think of fighting back, everyone else has been beaten down, fully understanding that they’re a ragtag bunch against an army, and resisting the new leadership of Negan is simply suicide. They collect their dead and go home.

And then the show just twists the knife once more—and if anything is a step too far, it’s this—showing us a vision of everyone sitting around a table in Alexandria, Glenn bouncing a baby on his knee, Abraham laughing with Sasha. Showing us the bright future they once imagined that can now never be. Just, y’know to make sure you’re as depressed as possible. Just breathe. 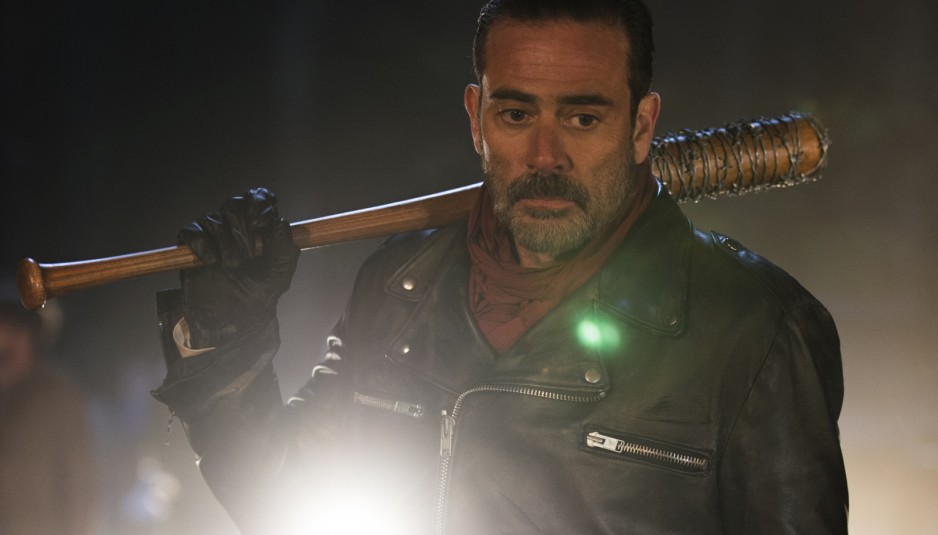