What if everything you thought about being right was wrong? What if the urge to win arguments turned out to be life’s No. 1 killer of dreams?

Feuding, disputatious people—some of them raging and red-faced—are the stars of just about every cable news show, reality series, network drama and presidential campaign. Arguments are so fascinating that way back in the early days of the 20th century, Dale Carnegie, a self-described “inveterate arguer,” was going to write a book on the subject. But then he had a change of heart. “I have listened to, engaged in and watched the effect of thousands of arguments,” Carnegie wrote in his anti-argument, mega-best seller of the ages, How to Win Friends and Influence People. His findings? “There is only one way under high heaven to get the best of an argument—and that is to avoid it. Avoid it as you would avoid rattle-snakes and earthquakes.”

Carnegie intuited a groundbreaking concept that many contemporary cognitive scientists now embrace: the argumentative theory of reasoning. The theory tells us that we argue not to search for a higher truth: We argue to win a battle. Like two elks crashing antlers, we smack each other with words, concepts and logic.

Although it feels to us like we use reason, logic and facts to arrive at a truthful belief, we actually have it backward. Most of the time, it’s the belief that comes first. Then we use reason, logic and facts to prove to ourselves, and to others, that what we believe is the god’s honest truth. “Reasoning was not designed to pursue the truth,” writes psychologist Jonathan Haidt. “Reasoning was designed by evolution to help us win arguments.”

Doubt it? Just poke around the internet—especially in the comments section of political blogs. You’ll find a lot of arguments studded with reason, logic and facts, but how many of them could be classified as anything close to the “truth”?

Dale Carnegie sums up the futility of our national passion for arguing: “Nine times out of 10, an argument ends with each of the ‘contestants’ more firmly convinced than ever that he is absolutely right.” O.K., Dale, but what are we supposed to do if we need to change peoples’ minds? We all have dreams and goals: to fight for a cause, sell a product, vie for a promotion or woo a lover. And to achieve our goals or make our dreams come true, we must change minds. So if arguing won’t change people’s minds, then what will?

Movements like Occupy Wall Street, Black Lives Matter and the Tea Party, get caught in a cycle of endless arguments with people who will never change their beliefs. They have trapped themselves in an angry echo chamber of their own device, pissing off as many people as they persuade and achieving few of their goals.

Gay marriage was a dream. And the advocates for that cause had to change people’s minds to make their dream come true. But they did it in a way that might surprise you. First of all, if gay people were going to win their battle for equality, they desperately needed to influence straight voters and politicians. Uh…what were the chances of that? Since ancient times, many, if not most, straight people hated, feared and punished gay people for the sin of their sexuality. The whole idea of giving gay people any rights was considered so threatening that it was used as a rallying cry to get conservatives to the polls in such numbers that many believe anti-gay sentiment catapulted George Bush to victory over John Kerry in 2004. Again and again, all across the nation, in political battles fought in 30 state campaigns, the result was always the same: Same-sax marriage activists lost.

Advocates for gay marriage—such as Freedom to Marry’s Thalia Zepatos—known as the movement’s “message guru”—understood the stumbling block: “We weren’t having an interactive conversation,” she said. Activists were arguing that discrimination was bad and that gay people deserved all the rights and benefits of marriage (that included a mind-numbing list of 1,100 items), but this moral and legal argument failed to change peoples’ minds. Zepatos realized that she and her fellow activists would never change minds until they understood what voters really cared about and believed in.

Zepatos then collected, pored through and analyzed data from hundreds of polls and focus groups about same-sex marriage. After a solid year of searching for clues about voter beliefs she finally hit pay dirt. It was the answers to a couple of questions in a single public opinion poll. When asked why they got married, straight people said it was for “love and commitment.” But why did they think gay people wanted to get married? Not for “love or commitment” but to rake in “benefits.” In other words, for selfish, economic reasons.

Zepatos cracked the code, launching a nationwide campaign entitled “Why Marriage Matters,” which dumped the morality and ditched the facts. Instead of arguing for economic rights, she began to sell gay marriage as something universal that everyone cared about and believed in: love and commitment.

Every press release, TV ad, radio spot, robocall, media appearance and yard sign, as well as every contact with a voter or politician, relayed the same message: Marriage is about love and commitment. And every loving couple—straight or gay—had the right to take part in this deeply sacred bond. With ad campaigns—such as the one with same-sex couples in love, talking about everything from how they met to who mows the lawn—minds began to change. The activists translated those changed minds into votes, engineering a handful of stunning victories in statehouses, and those victories served as a wakeup call to politicians who—perhaps conveniently—began to publicly testify about how their minds had been changed.

In a few short years, many straight people, started to perceive same-sex marriage as just an expansion of the concept of love, and they welcomed couples who happened to be of the same gender to join their formerly exclusive (or excluding) club. The most prized target of the gay marriage activists, Mr. Swing Vote, Supreme Court Justice Anthony Kennedy, wrote, in his majority opinion, mandating same-sex marriage as the law of the land, what in essence, was a love letter to the always-evolving institution of marriage that could have penned by Thalia Zepatos herself.

“This Court’s cases and the Nation’s traditions make clear that marriage is a keystone of the Nation’s social order. States have contributed to the fundamental character of marriage by placing it at the center of many facets of the legal and social order. There is no difference between same- and opposite-sex couples with respect to this principle, yet same-sex couples are denied the constellation of benefits that the States have linked to marriage and are consigned to an instability many opposite-sex couples would find intolerable.”

To understand Thalia Zapatos’ coup, we have to get to know the patron saint of community organizing, Saul Alinsky, who just happens to have had a lot in common with Dale Carnegie. Alinsky, too, believed that arguing for the sake of arguing is for fools. But Alinsky, who wrote the vocation’s bible—Rules for Radicals—also believed in changing peoples’ minds, and he taught a way to do that much powerful than arguing.

Alinsky’s mind-changing method is a four-part process. First, be very clear about what your goal is. Next, figure out whose minds you need to change to achieve that goal. Third, figure out what those people believe in and care about. And fourth, reframe your goal in terms of those peoples’ beliefs. As you can see, Alinsky’s rule of mind-changing is a form of mental jiu-jitsu. By reframing your goal to match what the other person already believes, you are using reason, logic and facts not to change the other person’s core beliefs but to confirm them.

And that’s just what Thalia Zapatos and her fellow activists did. They simply sold what they wanted—same-sex marriage—as something straight people already believed in—love. Movements who ignore this rule, such as Occupy Wall Street, Black Lives Matter and the Tea Party, get caught in a cycle of endless arguments with people who will never change their beliefs. They have trapped themselves in an angry echo chamber of their own device, pissing off as many people as they persuade and achieving few of their goals. The Tea Party in fact studied Alinsky. They mastered his confrontational methods, a form of tactical arguing, in which you gain a strategic advantage over your political opponents. But the Tea Party’s big mistake was ignoring Alinsky’s teachings on the end goal of any cause: changing the minds of enough people to make a difference.

We can see how Alinsky’s rule of mind-changing applies to any cause. We all believe in causes, but for most of us, the most important cause is ourself, our family, our community. To succeed in our cause, we may need to convince potential customers to buy the service our startup is selling; we may need to persuade a gallerist to give us an art show or we may need to get our kid to do his or her homework. And just like the advocates of same-sex marriage, to do that, we need to change minds.

Of course arguing has its place. People who are willing to see things from another point of view can learn a lot from one another if they are willing to listen and reflect upon one another’s ideas. And, in certain zero-sum scenarios, such as the courtroom or the debate stage, the argument is the be all and end all. But ask yourself this: Of all the arguments I have waged, throughout my life, how many times have I actually changed a mind?

The next time you get in an argument with your boss, employee, spouse, kid, parent, friend or costumer, remember, the choice is up to you: You can be right, or you can change minds. 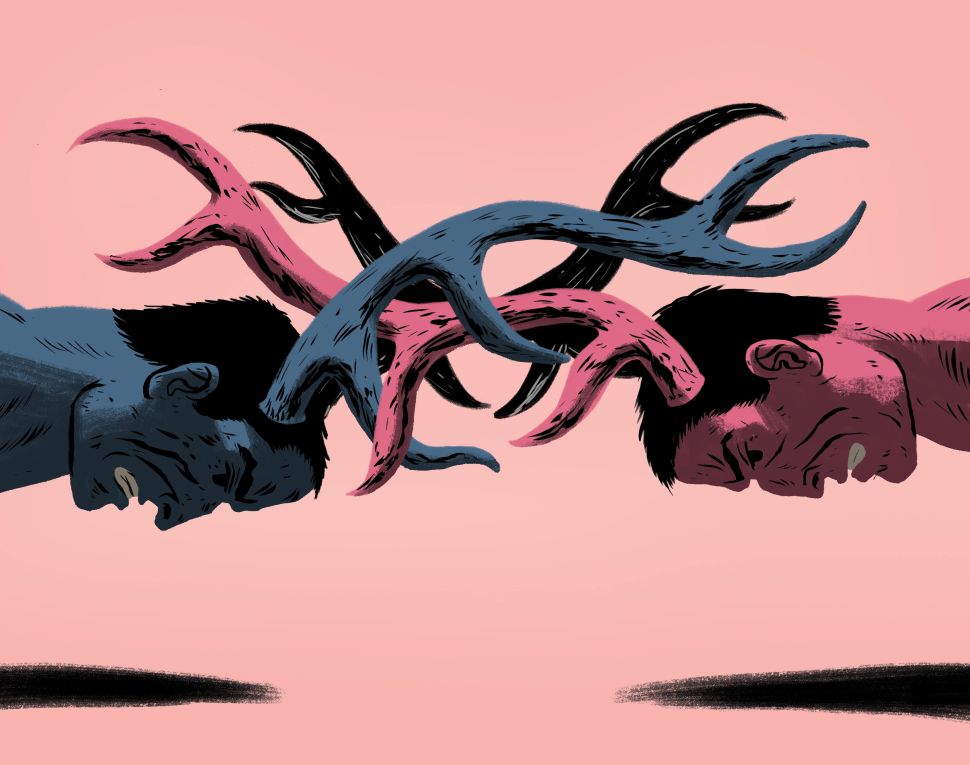