Artists get called many things—geniuses, madmen, rebels, unemployed—but rarely chemists. Painters, however, increasingly find that they need a degree in organic chemistry when they go to an art supply store and try to buy a tube of paint. There usually is the old workhorse, cadmium red, or they can select the hue substitute color for a considerably lower price and called naphthol or thioindigo red. Cobalt blue still may be for sale or a cheaper version that doesn’t contain any cobalt at all, such as ultramarine (itself a synthetically produced pigment), indanthrene blue, phthalocyanine blue or something called pigment blue 60. Lemon yellow is another pigment, which, traditionally composed of barium yellow, now is found to be nickel titanate, and alizarin crimson turns out to be an unpronounceable dihydroxyanthraquinone.

Is art—and, by extension, artists—better off or worse for these lab-produced pigments? Perhaps both.

Many of the traditional pigments used in paints and pastels are compounds that contain heavy metals, including antimony, barium, cadmium, chromium, cobalt, copper, lead, manganese, strontium and zinc. Their primary use is in industrial manufacturing, and the mining of them is expensive. Additionally, these metals are linked to various cancers, as well as diseases of the heart, kidneys, liver, lungs and skin. Concerns about the health risks of the materials they were using grew among artists throughout the 1970s and ‘80s, and in 1988 Congress passed the Labeling of Hazardous Art Materials Act (an amendment to the Federal Hazardous Substances Act), requiring arts and crafts materials manufacturers to identify product ingredients that are known chronic hazards on the label with appropriate hazard warnings. Manufacturers also must provide safety data sheets for these products that offer detailed information on potential health risks, first aid measures, flammability, how they should be handled and stored, how they should be disposed of and if they can be safely taken on an airplane.

For instance, Blick Art Materials, a retail and mail-order art supply company based in Galesburg, Ill., sells a 40-milliliter tube of cobalt blue deep—cobalt-zinc silicate—for a list price of $47.55 with the warning on its website that “cobalt-zinc silicate is toxic.” The company also sells a similar color, French ultramarine—complex silicate of sodium and aluminum with sulfur—listed at $18.11 for 40 milliliters, noting, “Ultramarine has no significant hazards.” An artist can spend less for a paint that is less likely to cause harm, a win-win.

The warning labels on art supplies do not display a skull and crossbones, but alerts about carcinogens and diseases frighten artists, leading art supply stores and paint manufacturers to discontinue certain products and stock the alternative hues. Kelly Dodson, manager at DaVinci Art Supply on West 21st Street in Manhattan, said, “Some paint manufacturers have reformulated their products or just dropped the colors, because of concerns about toxicity.” One of those colors is cremnitz white, which contains lead. “We can still get it somewhere, if someone really wants it, but there aren’t many companies making it anymore.” Another retailer, Utrecht, a Brooklyn-based retailer of artist materials, stocks cadmium red medium—noting on its website, “This product contains cadmium which is a chemical known…to cause cancer and birth defects or other reproductive harm”—as well as a cadmium red hue, which contains no cadmium but instead a laboratory-developed pigment (synthetic monazo) to which was added a semi-transparent white and requires no warning label. The cadmium paint is priced at $16.19 for a 37-milliliter tube, while the cadmium red hue costs $6.99 at that same size.

By industry agreement, the word “hue” must be included with the product name whenever one pigment is substituted for another in order that buyers not be misled. “Cadmium red hue simply tells a person that the paint tries to match the color of cadmium red but has no actual cadmium red pigment in it,” said Sarah Sands, senior technical specialist at Golden Artist Colors, a paint manufacturer based in New Berlin, N.Y. “Why a company will choose to create a hue can be varied. Sometimes, it is to provide a more lightfast version of a color, sometimes to provide a less toxic option, or, yes, simply to offer a less expensive one. And sometimes it can be all three.” With similar names, one might be led to believe that the two types of paint are interchangeable. Right out of the tube, the differences may seem subtle, but they become more evident when applied—pure cadmium tends to be heavier and more resistant to the brush, while naphthol is lighter and smoother, Sands said—and when mixed with other paints, such as white. “Inorganic colors get duller, they gray down, when mixed with white, but the organics don’t gray down when mixed, at least not as much,” said Robert Gamblin, owner of Gamblin Artist Colors, a paint manufacturer in Portland, Ore. The hues generally are more intense than the rare earth metals, so manufacturers need less of the organic pigments to produce the same color than the inorganic pigments. As a result, hues tend to have a smaller percentage of pigment by volume, and the tubes usually weigh a bit less.

The basic formula for traditional artist paint is pigment, binder (usually, linseed oil) and a stabilizer (such as beeswax or aluminum stearate). The hues also use pigments, binders and stabilizers, but many also add some amount of filler or extender, such as chalk or clay. When mixed, all paints shift in tone, sometimes warmer or cooler, and lab technicians in artist paint manufacturing plants play around with formulas to try to find organic-based colors that match those of the inorganic pigments. “Color has so many variables, and there are so many possible blends, that matching all of them is quite a task and nearly always is not a possibility,” Sands said. “So a company will get as close as they can and will often need to decide which qualities are the most important to aim for.”

Artists, who may be thinking more about the artwork they plan to create than about the materials they are using, may need to experiment with their paints in order to understand what effects will be produced. “The cadmium red hue and the cobalt blue hue shift a bit to the violet,” said Hilton Brown, an artist and former instructor in artist techniques at the University of Delaware. “Phthalocyanine sometimes shifts to green. Artists will pay less, but they’ll have to be more observant, correcting the color shifts by adding yellow to the cadmium hue and green to the cobalt hue. The hues are just not the same, and any artist who believes they are the same is a fool.” Even when they look alike straight out of the tube, paint colors themselves have actual numerical designations. Paint brand Van Gogh, for instance, sells orange cadmium (or pigment orange 20) and orange cadmium azo (or pigment orange 43 mixed with pigment yellow 3). These numbers correspond to a standardized Color Index, a nine-volume reference that is jointly produced by the Society of Dyers and Colourists in England and the American Association of Textile Chemists and Colorists in the United States. This reference is expensive, but it may be found in technical and art libraries. One may also contact the American Society for Testing and Materials for precise descriptions of pigments and the durability of pigments.

The labeling law has accomplished some of its goals, specifically warning artists of potentially hazardous elements in the paints and other products they use with regularity, but not everyone believes that artists can feel safer just by reading what is on the labels or the safety data sheets. Monona Rossol, an industrial hygienist and president of the Manhattan-based nonprofit organization Arts, Crafts and Theater Safety, claimed that the information provided by manufacturers is often misleading. Warnings are offered for paint pigments, for instance, that have been studied, but most pigments used in hues have not been scientifically evaluated for chronic effects, she said. With naphthol red, the common replacement for cadmium red, for instance, “we know what happens in two weeks after animals ingest it, but we don’t know much else. There is not enough cancer information to classify it and the other chronic hazards are only based on guesses since there is no hard data. In other words, you want artists to trust this pigment as a safe replacement without telling them that it could one day turn out to be a really bad actor if someone actually tests it for chronic hazards.”

She noted that on a safety data sheet supplied by German chemical producer BASF for the pigment pyrrole scarlet, company chemists answered the question about respiratory and skin sensitization by claiming “the chemical structure does not suggest a sensitizing effect. The product has not been tested. The statement has been derived from substances/products of a similar structure or composition.” To Rossol, this is not adequate to insure an artist’s safety. “The product is not tested, but they are guessing from other substances.”

Again, artists are not scientists—it is the rare studio art degree program that offers any courses on art materials, in fact—and the way they may test a product is not in a laboratory but on their own bodies, when something is inhaled or touches their skin. The results of those tests may take years to be known. 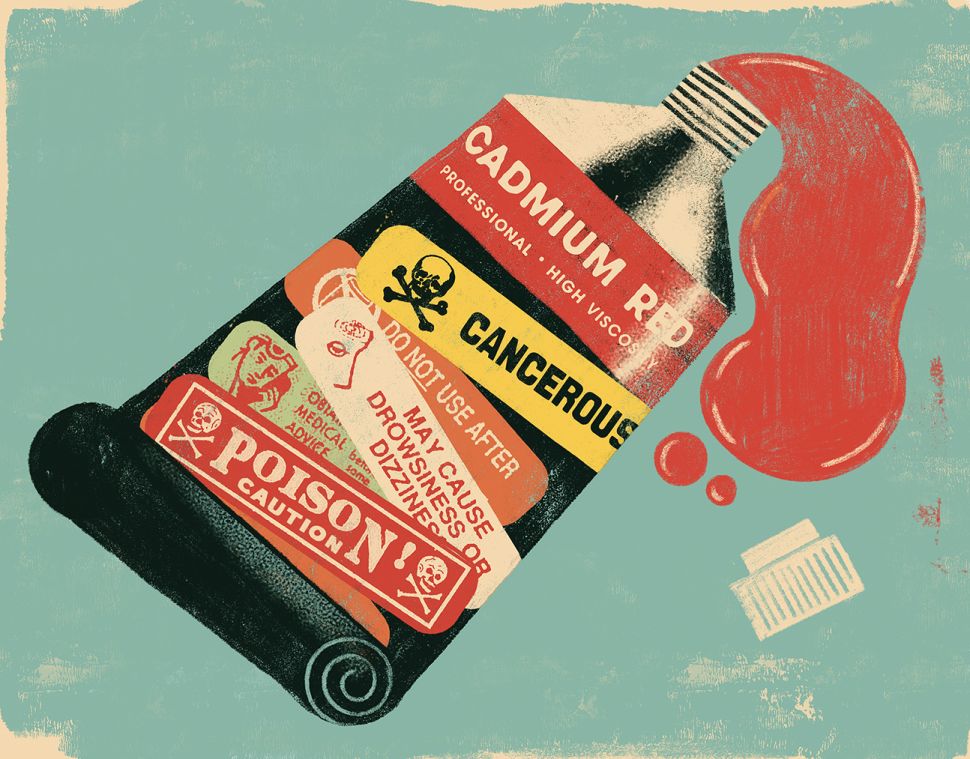