Throughout the history of the American dinner plate, meat held pride of place—a hunk of beef resting next to a pile of starch, with a few tepid vegetables perhaps thrown in for a dash of color and virtue. Peas, carrots and broccoli were an afterthought—something parents had to admonish and/or bribe their children to consume.

But the balance of power is beginning to shift. Scientific research, seasonal and local food activists, environmental advocates, chefs, and increasingly health-conscious consumers are ushering in an era where vegetables will usurp meat as the star of the dinner plate. By 2020, vegetables will assume top billing in the American diet, leading to a healthier and more sustainable future.

American children are conditioned from a young age to be wary of vegetables. A study published in the Journal of Consumer Research in 2014 found that when preschoolers are told food is “good for you” or will “make you strong,” they infer that the food is less tasty and will consume less of it. In our culture, vegetables have not traditionally been presented as something delicious and fun, and the impact of this mindset is clear.

Only six percent of American adults eat the recommended serving (2 ½ cups) of vegetables per day, according to the Produce for Better Health Foundation. These numbers are even lower among preteens and teens, whose consumption of vegetables is the lowest. Meanwhile, America eats more meat than the rest of the world, with the average person consuming 270.2 pounds a year.

Too much meat and not enough vegetables is a problem from a health and an environmental standpoint. According to Johns Hopkins (and many, many others), a “strong body of scientific evidence” links meat consumption to heart disease, stroke, type 2 diabetes, obesity, certain cancers, and earlier death. Moreover, 30 percent of the world’s total ice-free surface is used to support livestock and the industry drives 15 percent of global greenhouse-gas emissions.

Vegetables, on the other hand, are filled with vitamins and nutrients. They reduce the risk for heart disease, stroke, diabetes, chronic disease, and some cancers, and can help people manage weight. A recent Harvard Medical School and Massachusetts General Hospital study found that getting protein from lentils, nuts and other plant-based products, instead of meat, could significantly increase life expectancy.

And, given the hefty carbon footprint of meat, opting for vegetables over meat is also a smart environmental choice. A study conducted by University of Oxford found that meat lovers’ diets cause double the climate-warming emissions, and conversely, giving up or reducing meat intake will reduce the carbon footprint more than giving up cars.

Research is one thing—actually making behavioral changes is quite another. Reading an article about the health benefits of a vegetable-centric diet is a far cry from giving up meat. Making dietary changes can be a difficult and slow process, especially when it’s done out of a sense of “should” or “have to.” For most, eating is a pleasurable, culturally-laden, emotional experience. Today, we are on the cusp of a major shift in how people eat not (just) because of studies and statistics, but because vegetables are becoming recognized for their delicious, satisfying possibilities.

2015 and 2016 were awash in headlines proclaiming vegetables as the main event on the dinner plate. Meat consumption is “in a serious, sustained decline” while “vegan is going mainstream.” Food-industry consulting firm Technomic reports that two-thirds of today’s Americans think a vegetarian meal can be as satisfying as one with meat. Food Business News published an article naming “veg-centric dining” as the next big culinary trend, and Vogue (that all-powerful cultural arbiter) went so far as to ask “Are Vegetables The New Meat?”

This shift is just as pronounced in fine dining restaurants, which are often where culinary trends emerge. Christine Keller, director of trend practice at CCD Innovation, told Vogue that root-vegetable presence on menus has grown 46.7 percent in the past year. AL’s Place, which Bon Appetit magazine named America’s best new restaurant last year, lists meats under “sides” on the menu. Chic new restaurants— like Dirt Candy in New York, Vedge in Philadelphia, and Flora in Chicago—are also removing vegetarian cuisine from its “crunchy granola” roots.

Millennials are a key driver of this shift. Food companies adapt to meet the needs of their customers, and millennials have consistently demonstrated that they care about food, which also means caring about health, the environment, sustainability, and community. According to Eve Turow, author of A Taste Of Generation Yum, the Y generation is more passionate about food than any other in history. A 2014 study called “Outlook on the Millennial Consumer” found that millennials are making more conscious eating choices and pay attention to ingredient lists.

Vegetables are clearly moving to the center of the dinner plate, and it won’t be long before they overtake meat as the core of the American diet. Over the next 5-10 years, you will be able to order a cauliflower steak at a steakhouse and the dish that arrives won’t be an afterthought designed to appease the rare vegetarian. Giving up meat does not have to mean giving up the flavors, experiences, and satisfaction of comfort food dishes you adore. Vegetables are not “the new meat”—they are a better alternative.

Ben McKean is the Founder and CEO of Hungryroot, a direct-to-consumer brand of fresh vegetable-based packaged foods. Prior to Hungryroot, Ben was a Vice President and General Manager at Groupon, overseeing their food and beverage business. Ben came to Groupon through the acquisition of Savored, which he founded in 2009. Savored was the nation’s leading provider of yield management technology to the restaurant industry. Prior to Savored, Ben worked in Merrill Lynch’s technology investment banking group. Ben is graduate of Georgetown University and currently lives in New York City. 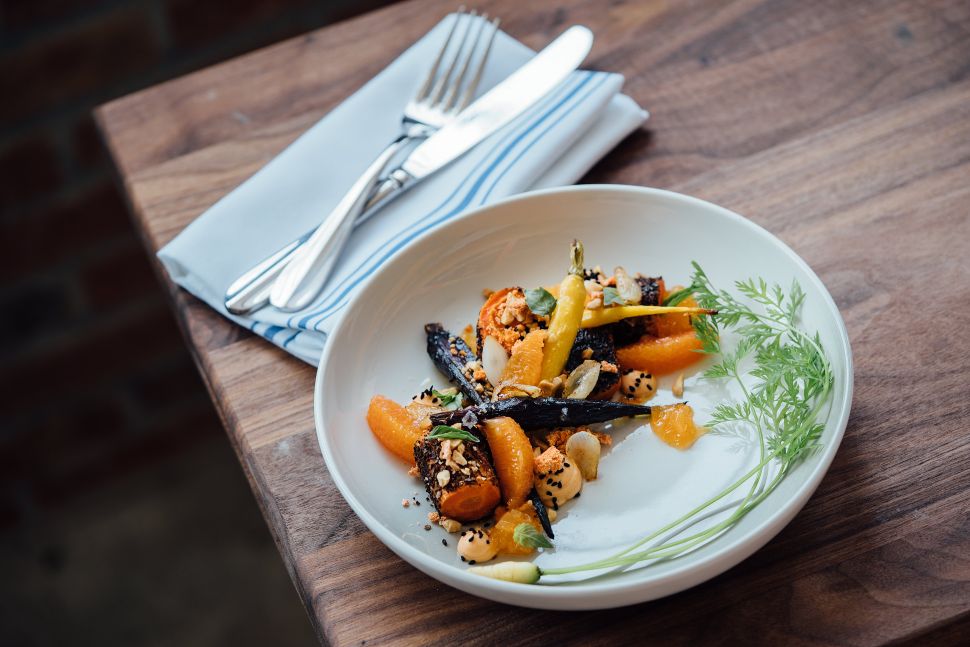