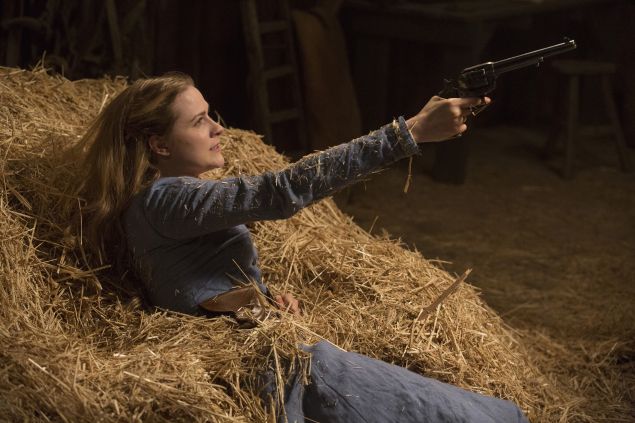 Vinnie: The majority of this week’s 40k a day trip to Westworld, titled “The Stray”, centered around the idea of origin stories. Oddly, none of them involved a billionaire 12-year-old’s parents getting shot in an alleyway over a pearl necklace, which Hollywood has led me to believe is the only possible origin story in existence?

But seriously, I’m not just talking about Host origin stories…erybody was out here explaining their backgrounds and inner tortures and metaphorical swimming lessons they gave to their dead kid. “The Stray” was heavy on the exposition (My boy Robbie Ford even broke out the chalkboard at one point because visuals are important), and a couple scenes would have been unimaginably boring if they didn’t include Anthony Hopkins, or robots, or this ungodly mixture of young Anthony Hopkins and a robot that I think proves CGI technology has simply gone too far: 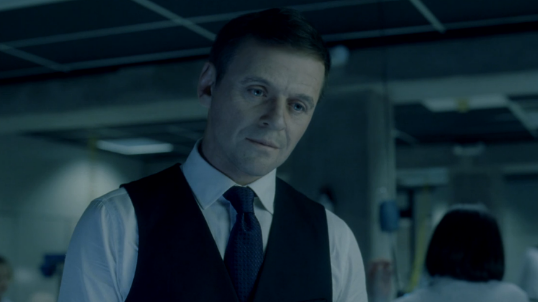 Drew: Hey, do you know that Robert Ford was like, a famous outlaw who killed Jesse James? Remember, they even made that Brad Pitt movie about it? That apparently Rex Reed LOVED? 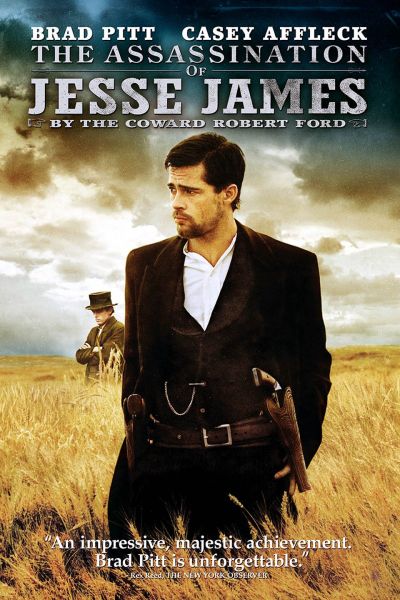 If this was another show NOT written by the guy whose idea of “deep” was Interstellar, I might think this was a bigger Easter Egg. But it’s probably not, right? There’s a part of me that thinks this was either a coincidence or just a cute little nod toward something “Western-y.”

Which is weird, because the other names on this show have nothing to do with anything. Arnold, for instance, is not a name you saw on a lot of tombstones back in Tombstone.

Vinnie: Let’s talk about Teddy, who until Ford downloaded an entire Wikipedia page’s worth of sorrow into his brain didn’t even have a set origin story, just a “formless guilt,” which coincidentally is the title of my memoir. But, as part of this grand, new extravaganza Ford is planning, Teddy gets his very own backstory, complete with an archrival: Wyatt, who everyone keeps talking up like he’s this Final Boss level mass-murdering monster but he kind of just acts like the patrons who come to Westworld (wait, is THAT a metaphor? Hard to tell without a chalkboard).

Either way, Teddy pursues Wyatt out into the desert, where all the spookiest Westworld storylines apparently lie, and comes face to face with, uh, this: 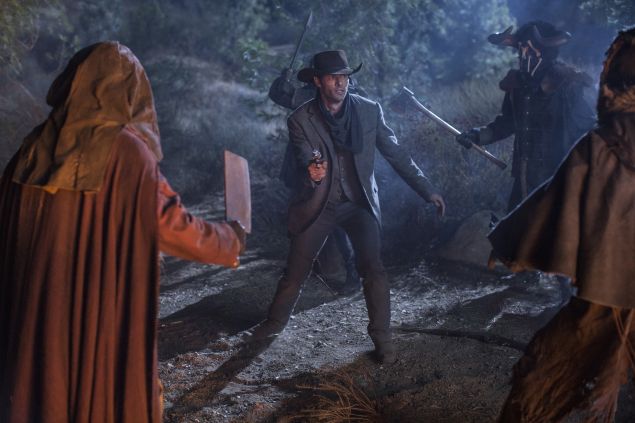 The…fuuuudge is going on here? Is that the monster from Jeepers Creepers? Did Teddy just get tomahawked to death by the League of Shadows? His bullets did nothing to stop them, so we have to assume those are Guests under those hoods, right? Why do they make velociraptor noises, Drew? Is Robert Ford’s big scheme to turn Westworld into Jurassic Park, Drew??

Just kidding. But actually? This story, as much as I love love love it, is already starting to fall apart when you look at it cohesively. We hear that Ford “pulled” characters out of their narratives to go work on whatever the fudge this is. Which, by the way, does NOT seem any less gruesome than Lee Sizemore’s Odyssey on Red River, so Ford is just kind of a prick, right? But they have a whole meat locker full of bodies they can use for their weird human crop circle subplot. Timewise, how would the guests KNOW to hook up with Wyatt’s team, considering this was all implemented in the space of one Westworld day? (I’m assuming it’s only been a day, because how long is William just going to stick around and NOT save a lady who needs saving?)

And yeah, weird how the bullets work in this show. It’s almost like…oh hey, Badman logic!

Also, I was REALLY hoping Wyatt was going to turn out to Dolores’ DadPrime. I mean, that would have been a good twist, right??

Vinnie: Speaking of, Dolores has all types of issues going on, not the least of which is she has the first line of “December” by Earth Wind and Fire stuck in her head (been there, girl). Also disconcerting: the oldest Host in the park is suffering some Mr Robot levels of fracturing reality, remembering her past traumatic experiences and melding them together in the present into some sort of patchwork quilt of post-traumatic stress and disembodied voices (been there, girl).

Drew: This show is like the opposite of Memento, or maybe the same as Memento, or maybe, you know what? Not really my problem. My question is, when Dolores opened her drawer and found a GUN, was she like “How did this get there?” Or do her memories retain for longer than a day? They can’t right?

What I’ve come up with is the idea that hosts can keep memories of their present incarnation for as long as they stay alive in a particular loop. After that, they get wiped. So Dolores, who found the gun and then was “powered down” into a dark and dreamless sleep, would have no idea how that gun got into her drawer. But if she was surprised at all to see it there, we have no idea.

Vinnie: Part of the problem is Bernard, who has been meeting with Dolores on the down-low (proving whoever keeps track of the androids in the park is the least observant employee ever), and also seems to be digging deeper and deeper into her code to try and morph it into genuine consciousness. This has, let’s say, mixed results, depending how heavily you weigh the ability to write a book report on Alice’s Adventures in Wonderland against a constant memory loop of the time Ed Harris did some nasty shit with a Crocodile Dundee knife in a barn. It’s pretty clear, though, that Bernard plans to build a replica-version of his dead son, which he’d know is a terrible idea if he watched Pet Sematary, or read “The Monkey’s Paw”, or had seen that weird movie from the 70s where Yul Brynner plays an evil robot.

Drew: Aw, I don’t think he’s trying to BUILD his son, so much as he’s got a soft spot in his heart that is exactly son-sized. Witness the crushed expression of disappointment that flickers across Bernard’s face when he has Dolores run diagnostics on why she asked about his son, only to learn it wasn’t genuine interest (lol) but a manipulation tactic to get closer to people. Someone’s read the PUA forums again!

Then again, if Bernard is disappointed that a robot isn’t actually interested in him, that’s kind of his problem. I’m also starting to have my doubts about who, in this backstage area, might actually be a repurposed host themselves. Like, I’m 90 percent sure Theresa Cullen, she of the unplaceable accent, supreme terseness and interest in Bernard (like, sexually…) makes her a good candidate for being a programmed bot herself.

Vinnie: Some super intriguing plotlines being set up for the future, all revolving around the ideas that A) The Hosts are starting to remember their prior incarnations, which leads to B) It all comes back to Ford’s old partner, Arnold, who went mad trying to design genuine consciousness, which leads to C) The people who visit Westworld are fucking insane and much better off just going to, like, Six Flags because there’s less of a chance the guy in the Daffy Duck costume is going to bludgeon you to death with a souvenir mallet because his bosses enjoy playing God with his emotions.

Drew: Well, and isn’t this LITERALLY a ghost in the machine idea (as well as the name of one of my least favorite X-Files episodes)? If Arnold can act as a Lostian Jacob figure to the hosts, despite being super dead, then maybe that shows that the hosts have evolved into humans? Or something? Because can robots be affected by ghosts? Why can’t God fuck with aliens? (And other questions that I feel like Ryan Murphy should have addressed by now…)

Vinnie: Tech engineer Elsie and park security whatever-the-heck Stubbs head up to the park to pursue one of the Hosts that’s started having thoughts of his own. “It’s as if he got an idea in his head that we didn’t program,” Elsie texts Bernard, which is the horrifying high-concept sci-fi equivalent of the time that U2 album showed up on our iPhones even though we didn’t ask for it. Unfortunately, the titular “stray” host, who had developed an unexpected fascination with the stars, Orion’s Belt in particular, smashed his own head violently and repeatedly with a rock in a pretty spot-on impersonation of the way Westworld’s writers hammer home the sexual tension between Elsie and Stubbs.

Drew: Ugh, those two. Why do I seriously get a wannabe-Whedon vibe from them? Their banter is so antagonistic that you just know they are going to make out at some point. And, not to play Team Ashley Stubbs here (haha, “Ashley,” is that a Gone with the Wind reference?), but it does seem like maybe that “one line of code” keeping the hosts from killing humans might need to be rewritten. Because okay, the stray didn’t bash in Elsie’s head with a rock, but it certainly shook off Stubbs and left him in a hole to die. And couldn’t be powered off.

In my mind, this is the part where logically, IRL, the park would close down for good. Like, once this aberration happens, you don’t want a kid wandering by…even if the kid is a robot, or has the world’s worst parents. (The only two options for being a child in Westworld.)

Vinnie: The episode ends with Dolores, who moments before shot a man through the neck because the voices in her head told her to (been there, girl), stumbling across Logan and William’s uber-boring campsite. Now, correct me if I’m wrong, but I’m pretty sure that puts the kibosh on the Popular Internet Theory that William is actually Ed Harris’s Man in Black, and he and Logan’s storyline is taking place 30 years before everything else…right?

Drew: The what…now? I do have to say, I agree with the Internet Theory that William might not be as good of a guy as he seems. He’s literally a personification of “the white knight,” and just because he’s into saving maidens instead of raping and killing them doesn’t mean he’s not playing out his own male masturbatory fantasy. What if Dolores turns him down at some point, the way she kind of blew off Teddy once she realized his knowledge of geography is pretty much limited to “Where we currently are; a train; Meereen, maybe?”

Something tells me William, while very sweet, might not be the hero of the story I first saw him as.

Or maybe we just need to program him with some more “vague guilt.” That usually works, right? 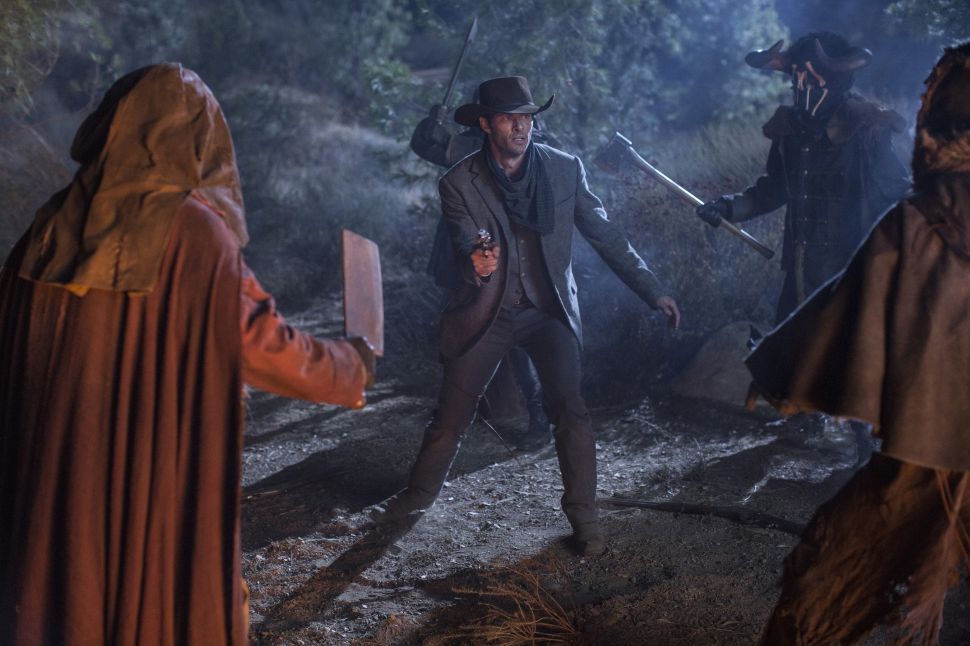