Regardless of who wins the presidential election, we know one thing for sure: the next president will face some kind of disaster. We can’t know what kind of disaster that will be, but it will be come, and it will be important that the next president have the crisis management skills for dealing with it. Of course, it’s hard to assess such skills in advance, but one remaining opportunity Americans have to do so is the third and final presidential debate on October 19. Over the past two decades, this question of disaster management has come up in multiple presidential debates, and the interactions on disaster have been instructive for those who want to learn whether the next president can be effective when they are needed most.

In 1992, at the three-way presidential debate in St. Louis, journalist John Mashek asked President George H. W. Bush about a public health crisis, wondering if there was any truth to the “widespread feeling coming from that your administration is not doing enough about AIDS?” Bush talked about his administration’s funding for AIDS, noting that he had requested for “10 times as much for AIDS victims as per cancer victims.” He also made what would be a politically unacceptable comment today, when he said that AIDS is “one of the few diseases where behavior matters.” He noted that he would be criticized for saying that, and lamented the extreme behavior of AIDS protesters, complaining, “You can’t talk about it rationally.”

In response, independent candidate Ross Perot said that he would work with the FDA on getting AIDS drugs out, saying “I would sit down with FDA, look at exactly where we are. Then I would really focus on ‘let’s get these things out.’” When Democrat Bill Clinton weighed in, he gave a detailed response that mentioned the “need to fully fund the act named for that wonderful boy, Ryan White.” In this, he not only made the Ryan White Act, which provided AIDS treatment funding, seem real to people, but he managed to get in a dig at Bush. Bush, surprisingly, neglected to mention the act, even though it passed under his signature and he could have taken credit for it. This one exchange effectively captured the candidates: President Bush was well-intentioned, but soft on the details and defensive; Perot was a blustery candidate who thought he could solve problems by the force of his personality; and Clinton was a master of policy detail who knew how to explain things in ways the American people could understand.

Eight years later, when Bush’s son George W. was on the ballot, he was asked about his experience facing disasters as governor of Texas. Bush showed that he understood that disasters were a proving ground for leaders: “It’s the time to test your mettle, a time to test your heart.” Former Vice President Al Gore came back with an answer about how he went to the site of the Texas wildfires Bush had referred to with FEMA head James Lee Witt. Gore had not done so, and the remark contributed to the general—and damaging—impression of him as a serial exaggerator.

In 2004, in the first presidential debate following the 9/11 terror attacks, President Bush was asked if he thought that the election of his opponent Sen. John Kerry would make another attack more likely. Bush responded in detail the successes that his administration had made up to that point in the war on terror. The answer highlighted his resolute nature: “I made some tough decisions. But people know where I stand.” Kerry, who needed to show his own form of toughness to a skeptical and worried American public, came back with an answer that second-guessed Bush across the board on the war on terror, especially regarding Iraq and Afghanistan. As Kerry put it, “This president has made, I regret to say, a colossal error of judgment. And judgment is what we look for in the President of the United States of America.” Kerry’s answer might have gone over well today, but at the time, the American people apparently did not want the entirety of their war on terror strategy questioned.

Another kind of disaster came up in a subsequent Bush-Kerry debate, the potential for a major flu outbreak. Moderator Bob Schieffer asked Bush why the U.S. was facing a severe flu vaccine shortage that year. Bush seemed prepared for the question, and explained that a British company had been providing half of the U.S. flu vaccine, and their vaccine became contaminated, leading to a limited supply. Bush added a plea to healthy people to forego the vaccine that year in favor of those more vulnerable—making him look presidential—and further explained that out of control litigation was discouraging U.S. manufacturers from getting into the vaccine business.

In response, Kerry failed to mention the flu vaccine issue at all, but instead criticized the U.S. health care system as a whole, highlighting the number of Americans in key swing states who lacked health insurance (Ohio, Arizona and Wisconsin). He had a point about the lack of insurance, something that became a central issue in Barack Obama’s 2008 victory, but the timing was not right for it in response to a vaccine question. Bush responded with a tough rebuke: “I want to remind people listening tonight that a plan is not a litany of complaints.”

A host of factors determined the outcomes of each of these races. But these disaster query moments did help to cut through a lot of the exterior noise and capture something about the essential nature of the candidates on stage, and their leadership styles. Hopefully, the moderators for the last debate in the 2016 cycle will see fit to ask similarly revealing questions.

Tevi Troy is a presidential historian and former White House aide. His latest book is Shall We Wake the President? Two Centuries of Disaster Management from the Oval Office 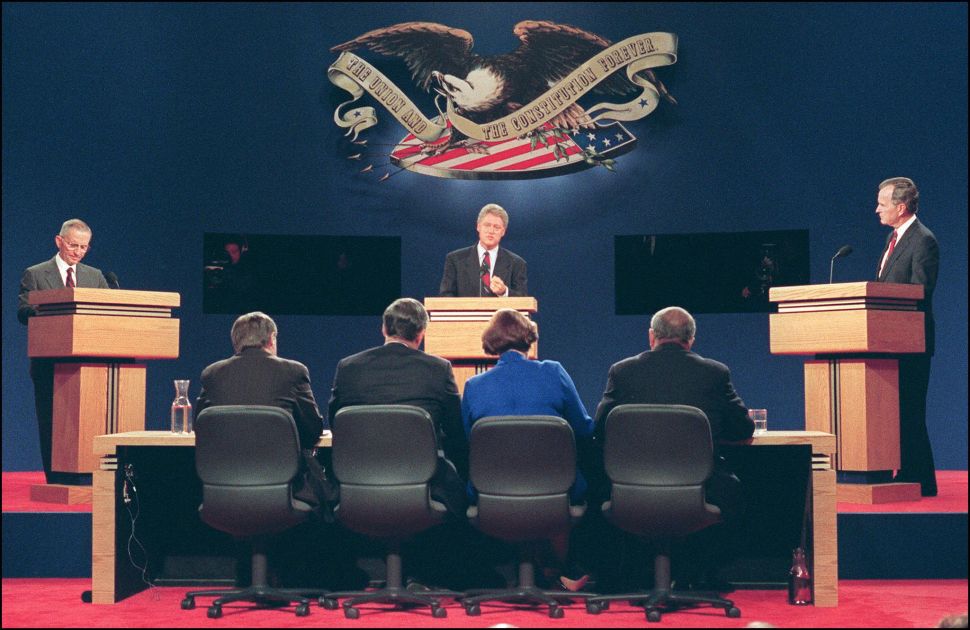