From Brexit Britain to Calais’ Jungle to Donald Trump’s fantastical border wall, anxiety over refugee and immigrant influxes is at peak pitch. The Obama administration earned scorn from Republicans for recently announcing plans to admit 110,000 refugees in fiscal 2017, nearly 30 percent more than its 2016 quota, though still far fewer than the numbers of mostly Soviet bloc and Cuban refugees arriving in the peak Carter-Reagan years.

Politicians flounder and demagogues huff and puff over this “unprecedented” immigration pressure. In fact, it all more or less happened 1,640 years ago, on Europe’s—that is, the Roman Empire’s—troubled border. In 376 A.D. the empire underwent a self-inflicted ordeal that seems eerily prescient today, setting off a chain of events that would lead to the sack of Rome itself. The cause, students learn, was a series of barbarian invasions. But as the contemporary historian Ammianus Marcellinus and other chroniclers tell it, Rome’s downfall actually began as a refugee crisis.

The Romans were hardly novices at resettling refugees and other immigrants. Theirs was the world’s longest-running multi-ethnic, multinational society, the most diverse and successful ever seen—at least until the rise of our republic. For seven centuries, Rome grew by assimilating immigrants and conquered peoples. They provided much-needed labor: settlers in underpopulated territories, farmers to feed the empire’s cities and armies, and especially, soldiers to fight its wars. For all, there was a path to Roman citizenship, the universal elixir. Finally, Emperor Caracalla granted citizenship to every freeborn resident.

Roman assimilation failed, however, when Hun warriors—as feared in their day as ISIS is today—swept into Europe from the east. The Huns overran some Germanic Goth tribes and drove others west and south to the imperial border. Men, women and children—200,000 by contemporary accounts, somewhat fewer by modern estimates—massed across the Danube River, begging for asylum. The Eastern emperor Valens, who reigned in Constantinople while his Western counterpart ruled in Italy, welcomed one main Gothic tribe, the Tervingi (later called Visigoths) on highly favorable terms.

Usually when Rome accepted barbarians, it dispersed them in small groups to speed assimilation and keep them from forming rebellious critical masses. But the emperor and most of his army were off warring against a rival Iranian empire. Valens didn’t have enough troops on site to supervise a dispersal, and he was eager to receive more German soldiers for his army. So he granted the Tervingi permission to stay together and choose where they wished to settle. Their grateful chief, Fritigern, offered to convert to Christianity.

Rome’s downfall shows what happens when, instead of accommodating and assimilating refugees, you isolate and abuse them.

This streamlined plan never reached fruition. Rome’s vaunted logistical capacity crashed against the sheer number of hungry refugees and the venality of its own officials; their arrogance and incompetence could have been a playbook for the Rumsfeld/Wolfowitz/Bremer occupation of Iraq. The Roman garrisons herded the Tervingi into camps that became death traps. Corrupt local officials siphoned off what food was sent. At the same time, they refused to let the Goths leave the camps to buy food. Starving refugees reportedly sold their own children into slavery for dog meat, one child for a dog. Local commanders bullied and menaced the Goth chiefs, in one case even murdering their attendants.

Desperate and outraged, the Tervingi rebelled, some wielding weapons that the overwhelmed border guards had failed to confiscate and others whatever clubs they could improvise. Another Gothic group, the Greuthungi (a.k.a. Ostrogoths), whom the Romans had denied entry, now poured across the river. Slaves, miners, prisoners and German soldiers already serving under Rome likewise rose up. Valens sent his army back from the Levant to put down the uprising and eventually returned to lead it. He begged for aid from his co-emperor in the West.

Finally, two years after fleeing across the Danube, the Goths met the imperial army at Adrianapole, where Turkey, Greece and Bulgaria now meet. Fritigern offered peace for land; Valens refused. The Goths won a crushing victory, slaying most of the Roman troops and Valens himself. They had established themselves as an independent power inside the empire. In 410, they sacked Rome itself.

Both sides in today’s debates might find confirmation here. Look what happens when you open the doors, the immigration-averse can say. Those who see immigration as a source of strength and refuge as an obligation might draw opposite conclusions: Rome ultimately couldn’t keep the Goths out; those it barred eventually crossed the Danube anyway. Its downfall shows what happens when, instead of accommodating and assimilating refugees, you isolate and abuse them.

Eric Scigliano’s books include Seeing the Elephant: The Ties that Bind Elephants and Humans and Michelangelo’s Mountain. 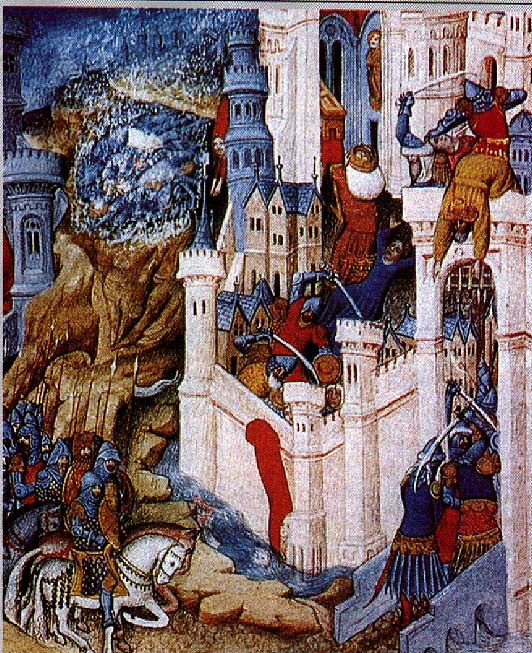