So fun seeing thousands of people today at #remake2016! Creativity in full force.

John Greathouse, a partner at Rincon Venture Partners and professor at UC Santa Barbara, started a Twitter storm last week when he suggested in an op-ed for The Wall Street Journal that women who work in tech should obscure their gender in order to succeed. He thought it would be best for entrepreneurs, both male and female, to go by their initials when fundraising, so all preconceived notions relating to race, ethnicity and gender could be eliminated. Yes, he included both sexes, but we knew who he was really talking to in this article.

As a woman in tech, who has been dubbed “Silicon Valley’s Martha Stewart,” Brit Morin had a bone to pick with Greathouse. “I think it’s BS (no pun intended) that women would choose to use initials instead of their names. The only way we’re going to change the problem of getting more women in tech and more women into business is to have women at the top, leading with their names to inspire the rest,” she told the Observer last week at Re:Make, a conference created and hosted by her company, Brit + Co. The online platform inspires women via content, kits and courses, with a focus on DIY, career, fashion and lifestyle. Though the startup only launched in 2011, Brit + Co is now moving into retail with a coloring book for adults—in partnership with Crayola—and recently launched its first product line in partnership with Cheeky at Target. In short, the site has become a guiding force for all those who are creative, or at least for those who aspire to be.

That's a wrap on Day 1 of #remake2016! Can't wait to see everyone at the Re:Make Festival tomorrow. (PS thanks @bradgoreski for the sexy bunny ears in this pic 😜🐰)

Though the colorful site has celebrity and fashion news and can teach you how to make a tassel necklace, let’s be clear, Morin is a woman of tech and she is here to work. After leaving Google, where she worked under Marissa Mayer (her resume also includes a stint at Apple), Morin launched her own site after seeing how much her fellow millennials adored crafting. As the first generation to have two working parents, many kids had to figure out how to entertain themselves, often leading to the invention of projects. It is that domestic cluelessness, and love of all things tech, that led to the birth of our current DIY nation.

Steadily, but surely, Brit + Co expanded from content to guides (the site now has over 100,000 DIY tutorials) to courses and video (their Snapchat game is extremely strong after a $20 million fundraising round last year), resulting in 90 million monthly unique users of the coveted 20-30 year old female demographic across their various platforms. “I’ve always loved tech and been drawn to trying the newest apps and gadgets. I think [it’s] vital to all businesses to constantly innovate and I’ve tried to instill that in Brit + Co’s DNA. With that mindset, trying out new platforms has come really naturally to us. Snapchat in particular struck a chord with me because it was so different than anything else out there. I also saw the way my team really took to Snapchat; the majority of Brit + Co employees, like the majority of our audience, are young women, so I look to them for feedback,” she said.

We have been having so much fun at the @britandco #remake2016. Isn't that set up to die for?!😍 #britandco #diy #abmlifeiscolorful

She has built a DIY empire in less than a decade. “I broadly mapped out a growth and expansion plan before we even started; I knew we first had to focus on content and building a community, then we could look at expanding into commerce, etc. And for the most part, we’ve stayed on track. I hope to continue growing and eventually [building] a brand like Martha Stewart or Disney,” she said. Labeled as a Silicon Valley “it” girl by Business Insider, Morin also launched the #IAMCREATIVE foundation in 2015, which will offer grants of $2,500 to $15,000 to people with worthy creative project ideas.

Re:Make, a 48 hour summit of creativity including live classes and speakers, is now in it’s fourth year. This year’s lineup included Nasty Gal founder Sophia Amoruso, SoulCycle CEO Melanie Whelan, best-selling author Brené Brown and entrepreneur and media personality Tyra Banks. Morin, who has two children under the age of two, hosted the entire event. “I definitely dreamed big, but I’m still always floored by the progress we make every year. I really love engaging with our community in-person and hearing their stories. We have such an incredible community that utilizes our classes and content in so many ways, whether it’s to create products that they sell as a side hustle, or to overcome stress. Re:Make really highlights the human element of why we do what we do and makes all those hours in the office totally worth it.”

So why is Morin the outlier in Silicon Valley, instead of the norm? The number of female computer science graduates now only make up 18 percent of the total and this is a significant decrease from 37 percent in the ’80s. Though there are a number of impressive initiatives trying to rectify this like the Rockefeller Foundation’s goal to get 100 female CEOs in the Fortune 500 to Melinda Gates brand new focus on getting more women in tech, the numbers are still startling.

“To some extent, I think it’s a historical problem; both tech and media have always been male dominated industries. When culture and hiring processes are created from the top down, it’s not surprising that men hire other men. There’s also the issue of funding. Because more VCs are men than women, they have inherent bias to support companies that they personally understand and connect to. That being said, it is still surprising to me that so many female-focused media companies are run by men, because I believe women also have instincts about the content and products that other women want. The good news is, there has definitely been a lot of attention on gender-bias across industries recently and more and more companies are making positive changes.”

My boys wearing their "Create" shirts this weekend at #remake2016. Ansel got to watch me on stage all day on Friday and kept pointing and saying "Mama TV!" It's inspiring to think I can influence two little boys who may grow to appreciate seeing women running companies (and stages) of all kinds. I can't wait for the day when they consider that as normal. #anselmorin #austinmorin

Morin certainly isn’t afraid to share her full name when pitching (or wear earrings she made herself) and neither should other women. “I believe Brit + Co’s focus on creativity is really unique and I’m proud that we inspire so many women to live creatively everyday.” 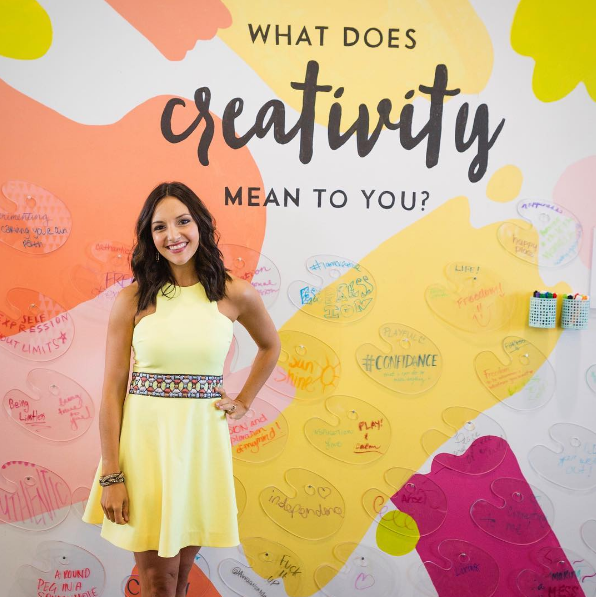