In his first public appearance after his second debate, Donald Trump traveled westward from Pittsburgh, on The 65th Infantry Division Memorial Highway, along the banks of the Ohio River. The same route, roughly, that Lewis and Clark would have completed on the first day of their journey to discover America.

After a weekend of controversy over crass statements he made 10 years earlier caught on a hot mic on the set of a soap opera—as he was preparing to make a cameo appearance in a fictional world built upon crassness—Donald Trump was on his way to Ambridge, Pennsylvania.

The Trump strategy, always, has focused on West Virginia, Ohio and Pennsylvania. Win those, he believes, and win the election. In both debates he mentioned those states by name. West Virginia was lost to the Democrats long ago when Hillary Clinton disclosed her preference to destroy the coal industry. Ohio is more than trending “Trump.”

Pennsylvania is the nut he must crack.

Ambridge is named for The American Bridge Company, which had its factory there. The undemolished parts of the American Bridge plant sit idle outside of town, rusting and unkempt. Many of the shops on Main Street are closed, their storefronts boarded.

Traditional political demographics say that people in Ambridge vote Democrat, harkening back to the heyday of unions, and their connection with the Democratic Party. The cinch hold has been weakening, though. Drive down the side streets and past the yards of the town’s residents and one sees something unexpected: Trump signs.

If not biting on Donald Trump’s message, the people of Ambridge are certainly nibbling, and may well bite by election time. This is the underreported story in this election: Democratic enclaves in the Rust Belt may swing not only Republican, but New York real estate mogul Republican.

What is the connection between Donald Trump and these voters?

Lisa Cvitkovic, the office manager at a local beer distributor, who attended Trump’s rally, puts it succinctly: “He is a businessman who has a plan.”

If Trump wins this election it will be because he made a strategic grab for the great American remnant found in places like Ambridge.

Almost overnight, 30 years ago, the plants and mills around Ambridge closed. Lisa’s father worked at the Bethlehem Steel plant in Leetsdale, and he was suddenly out of work. Politicians offered a hand-out, but little else. Nobody ever came to Ambridge and said what needed to be done to bring back manufacturing to the town.

Donald Trump has provided something that people raised to bend steel understand: a causal connection. Trump says that the plants closed and went elsewhere in search of cheap labor under international trade deals negotiated by politicians—who, in return, received contributions and stature among the connected, in what became a massive insider’s game.

Trump claims to be an outsider, beholden to nobody.

Ambridge is a place where the slogan “Make America Great Again” is especially applicable.

There was a time when Ambridge was great. Day and night, in the glow of fire, welders and engineers pieced together large steel expanses that were then shipped by barge to places unknown. The pieces were assembled into bridges, spanning the natural divisions of geography.

Long before diversity became a value, enforced by federal statute and taught as an abstraction in college graduate classes, it existed in Ambridge. Slav, Croat, Ukranian, and Russian immigrants—their conflicts formed in distant lands were ancient and bloody; but somehow dissipated upon the shared enterprise of bridge building.

Prosperity was the unifying principle.

These are certainly strange bedfellows, the people with a lot of consonants in their names, who will support the New York casino owner and reality show host in the presidential election. They have faith in him, and he in them. They know, too, that faith is tested.

Nobody liked what Donald Trump said on that hot mic, not even him. Equally offensive, though, was the moral scold he was about to endure from—of all people—the Clintons and right-thinking portions of the same culture that elevated sexual crassness to a constitutional right. It smacked of hypocrisy of a sort that is typical in American history. If not quite the noble figure of Hester Prynne, Trump was at least something akin to the Harper Valley widowed wife; who, nobody disputed, wore her dresses way too high.

Sunday night was designed to crush him. Republican leaders were fleeing. The moderators were against him. Trump was alone on that stage. Most impressive to the people of Ambridge, he fought back. Which is something they are not accustomed to in their politicians.

The rally on Monday played to a packed auditorium of 2,600, with thousands of others outside watching on a JumboTron. There was genuine excitement.

They appreciate the candidate who refuses to be scolded. They, too, will not be scolded. They hear the condescending “feel your pain” sympathy of Hillary Clinton and are not fooled by it.

They know the new trillion-dollar stimulus package that she promises will provide jobs to the American worker will never reach Ambridge. It will be spent, instead, on the politically connected contractor and his minions of union employees forced into making campaign contribution in the form of usurious dues.

If Donald Trump wins this election it will be because he made a strategic grab for the great American remnant found in places like Ambridge. They seem more than intrigued. 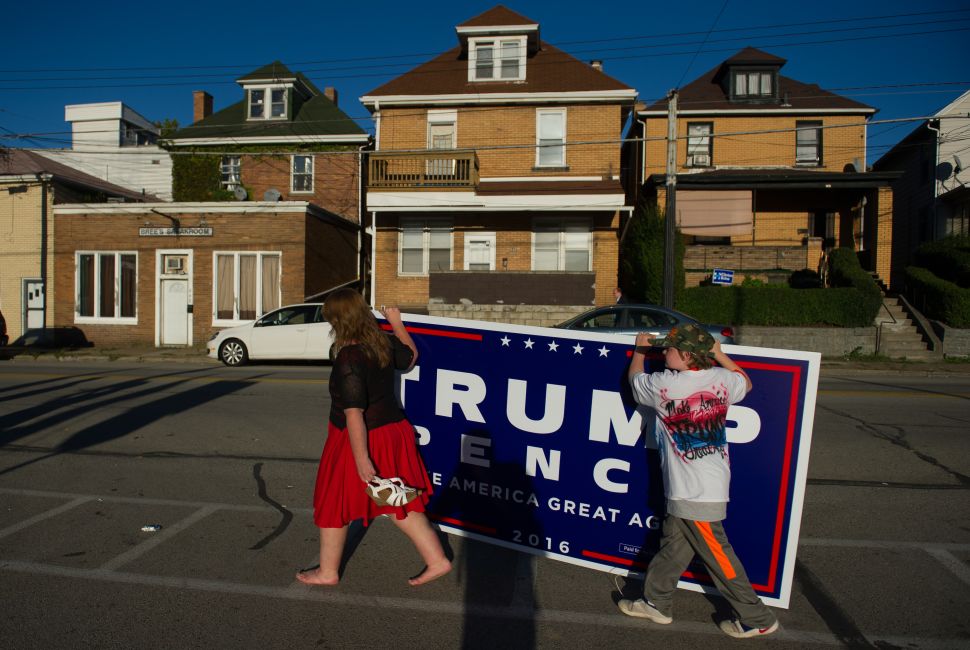