Have you ever pulled out your camera or phone in a museum or historic place and suddenly found a staff person telling you “no photographs”?

I was in London recently and it happened repeatedly in places like Westminster Abbey, Buckingham Palace and Parliament.

The no-photos policy is not limited to just England but is a worldwide phenomenon. Visitors cannot take photos in places like the Sistine Chapel in Rome, the Van Gogh Museum in Amsterdam or inside Thomas Jefferson’s Monticello home.

Some large art museums like New York’s Metropolitan Museum of Art and Boston’s Museum of Fine Arts have changed their policies and now allow photography in parts of their permanent collections. However, they typically ban all photography in special exhibitions, which are often the main reason people are visiting.

I decided to dig into the reasons – largely financial – that museums restrict photos. In the process, I became convinced that it’s time for museums to find creative ways to satisfy people’s desire to snap memories while keeping their collections funded.

Why the ban is a problem

Photography bans block our incredible desire to visually record our lives. A rough estimate of the flood of pictures being uploaded to the internet suggests we are taking and sharing about one trillion digital images each year. Among the most popular images being uploaded are selfies taken in front of famous objects, places and monuments.

Smartphones and camera glasses are making documenting our lives easier than ever and encountering photo bans more frustrating. It is exasperating that many places that ban photography sell reproductions in their gift shops. They also post brilliant high-resolution photographs on their websites of the very same artwork the public is not allowed to capture.

Talking to museum staff and examining articles, discussions, blogs and debates reveal five reasons for the ban – all of which primarily boil down to money.

First, camera flashes, which emit intense light, are believed to hurt paintings and the patina of delicate objects. Eliminating flashes, even inadvertent ones, keeps paintings in pristine shape and reduces expensive restoration costs.

However, research by the Unversity of Cambridge’s Martin Evans on assessing the harm done by flash photography suggests “use of electronic flash by the public poses negligible danger to most museum exhibits.”

Second, eliminating cameras improves the visitor experience. Visitors who enjoy a museum are more likely to come back, join as members and recommend the museum to friends. It is hard to enjoy a painting when people are crowding in front posing for selfies using sticks, which occasionally hit both artwork and other patrons.

It also reduces a museum’s insurance costs since some photographers go through incredible contortions, like hanging off of balconies, to capture the right shot. Lowering the chance of injury makes a museum cheaper to run.

Third, preventing photography ensures the gift shop maintains a monopoly on selling images. If photography is not allowed inside the museum or historic place then the gift shop’s books, posters and postcards are the only legitimate source for high-quality images of a famous painting, statue or room.

Fourth, banning photographs is believed to boost security by preventing thieves or terrorists from visually capturing and pinpointing weaknesses in alarm systems and surveillance cameras. While there are relatively few major art thefts, those that occur are headline news.

However, one could argue that uploading digital photographs to the internet is more likely to boost museum security than to compromise it. The more often a picture or object is recognized, the harder it is to sell after being stolen. The widespread sharing of images online means picture taking should be encouraged to reduce theft, not banned.

The fifth reason cited is that taking photographs often violates copyright protections. Copyright is designed to protect authors, composers and artists. When enforced, it ensures the creators are paid anytime someone wants to “reproduce the work in copies.”

Copyrights typically last for the artist’s life plus 70 years. This means that the vast majority of museum collections of Renaissance artwork, Greek statues and Impressionistic paintings lost their copyright years ago.

Copyright is more of an issue for modern artwork, especially when the piece is loaned to a museum. Museums don’t own the copyright of loaned paintings or sculptures since it resides with the owner or the original artist. However, today it is relatively easy to check if an image is being sold on the internet or used for unauthorized commercial purposes to ensure the copyright holder is paid their due.

Personal photographs uploaded for private viewing do not harm artists. Boosting recognition of a painting or object photographs might even increase the actual value to copyright holders.

What should be done?

Museums and historic places often have collections that are worth millions. Some contain works of art that are so hard to value that people simply call them “priceless.”

These same intuitions, however, are often perpetually short on cash. They constantly seek to boost revenue and cut costs. One method some places have used to achieve these goals is to ban photography of part or all of their collection. The ban is important because for the typical U.S. art museum, the store is an even more important source of revenue than admissions, classes, special exhibition fees and the cafe.

Museums that ban photography are fighting a losing battle since high-quality cameras are getting smaller and more wearable. Clothes and glasses from companies like Snapchat and Google mean tiny spy cameras are no longer in the realm of science fiction.

How can some museums generate more revenue and still satisfy our desire to take photographs? One simple model I first saw in the Natural History Museum in Rwanda is to charge a photography fee. Patrons can take as many pictures as they want as long as they pay upfront for the privilege.

Another interesting idea is the policy enacted at the Newport Mansions, which are summer homes built by the elite of the Gilded Age. In the mansions, only smartphone cameras are allowed. Larger cameras are banned in an attempt to prevent high-resolution pictures from being taken, which protects gift shop revenue. Unfortunately, with the rapidly improving resolution of smartphone cameras, this policy is only a stopgap.

Banning tripods, which people trip over, and selfie sticks, which occasionally hit artwork and other patrons, makes sense. However, completely banning photography in an age in which almost everyone has a camera in their phone no longer makes sense. It is time for museums and historic sites to develop more creative policies like a photography fee charged at entry. 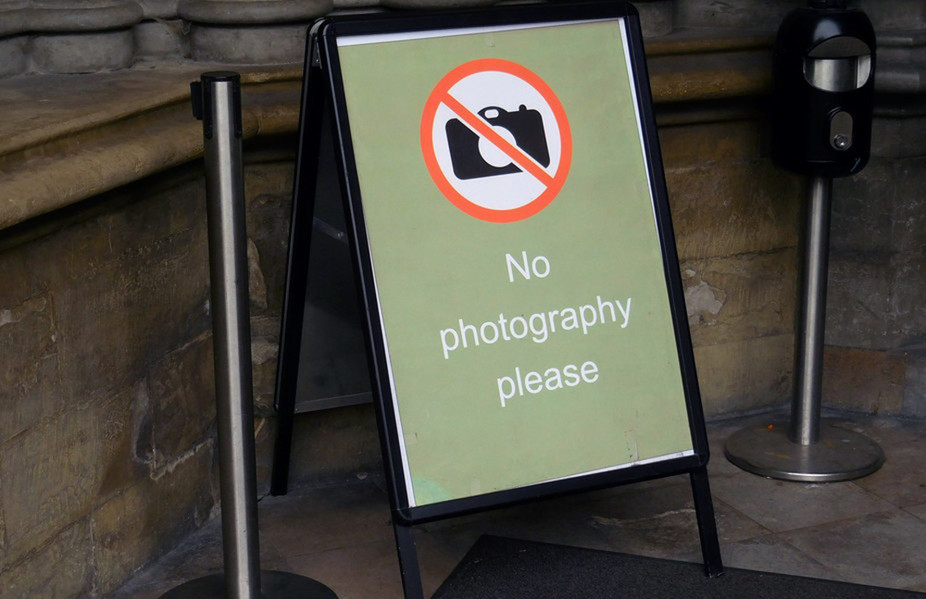