The New York Times endorsed Hillary Clinton twice, but prior to that—even preceding the Democratic primary in New York—the institution served as an extension of the Clinton campaign.

Rolling Stone’s Matt Taibbi pointed out their bias in March 2016, after an article published in the Times was severely edited to remove any semblance of positive imagery in the portrayal of Bernie Sanders’ role in Congress. Taibbi dubbed Sanders “the amendment King” in 2005 for how working with both sides of Congress to add important amendments to legislation—often successfully. His work ethic, honesty, and experience earned him respect from both Republicans and Democrats, despite serving as an Independent.

First, The New York Times changed the article’s headline, from: “Bernie Sanders Scored Victories for Years Via Legislative Side Doors,” to: Via Legislative Side Doors, Bernie Sanders Won Modest Victories.” The article also added two paragraphs criticizing Sanders, portraying him as unrealistic, a commonly-used Clinton campaign argument—especially as Sanders continues to be much more progressive than Clinton on a number of important issues.

Throughout the primaries, the Times regularly published hit pieces on Sanders by columnists Paul Krugman and Charles Blow—and the company doesn’t seem to employ anyone, or at the very least publish freelance submissions, willing to portray Sanders in a positive light. Such an extreme imbalance in the opinion pages was common among major newspapers throughout the primaries, and not because there weren’t articulate academics and activists explaining why particular Sanders proposals were beneficial. Rather, publications like the Times overtly skewed their coverage to favor Clinton. Such extreme bias for one presidential candidate is harrowing, given the Times’ size and reputation of integrity for trusted journalism. The 2016 Democratic primaries saw the paper destroying that integrity and trust.

In the latest WikiLeaks release of Clinton campaign chair John Podesta’s emails, several Times journalists are implicated in abandoning any semblance of objectivity to fulfill the agenda of the Clinton campaign. In July 2015, correspondent Mark Leibovich emailed the Clinton campaign a transcript of an interview he conducted with Clinton for them to proofread and edit as they saw fit.

In March 2015, Clinton staff discussed planting a pro-Clinton story in the Times. “NYT heroine. Should she call her today?” Podesta wrote to other campaign staffers with the subject line “Laura Donohoe.” “I do think it’s a great idea! We can make it happen,” replied Clinton aide Huma Abedin. The story they referred to, “In New Hampshire, Clinton Backers Buckle Up,” was published in the Times on March 12, 2015 about Donohoe, a retired nurse and Clinton supporter in New Hampshire.

Times contributor and CNBC correspondent John Harwood regularly conversed with Podesta through email, offering congratulations and praise that made him appear as more of a Clinton surrogate than a journalist.

In May 2015, a Clinton staff email chain noted, “There is a blog post from HRC on small business on LinkedIn that will go up tomorrow, NYT will break that story and LinkedIn PR will push it around to tech outlets.” This suggests the Clinton campaign directly fed stories for the Times to “break.”

The same chain also adds that Clinton campaign manager Robby Mook coached The New York Times’ Jonathan Martin through a story. “New York Times (Jonathan Martin) is planning to do a piece on our apparent focus on mobilizing the base over persuading the middle, contrasting it with WJC’s campaigns and HRC’s ’08 campaign. Robby is going to talk to him to explain that we are doing both at the same time — our progressive positions are also mainstream positions.”

“It is the new New York Times people,” wrote Clinton campaign communications director Jennifer Palmieri in an email regarding an August 2015 New York Times story that discussed Clinton’s chances of losing the primary.

The New York Times’ majority shareholder, billionaire Carlos Slim, has donated between one and five million dollars to the Clinton Foundation. The Times’ staff, especially on politics, may not be directly influenced by their wealthy owners, but the hiring practices and editorial board’s decisions reflect the desire to maintain, preserve, and perpetuate the status quo—not issue challenges to this establishment.

When the Times wasn’t attacking Sanders, they were widely ignoring him. Clinton dominated their headlines throughout the primaries, and news coverage focused on her improvements and positive attributes over her gaffes and shortcomings as a presidential candidate. On February 1, Penn State journalism professor Russell Frank urged the Times to adhere to their public editor’s criticisms and take their thumbs off the scale for Clinton. The company never did. 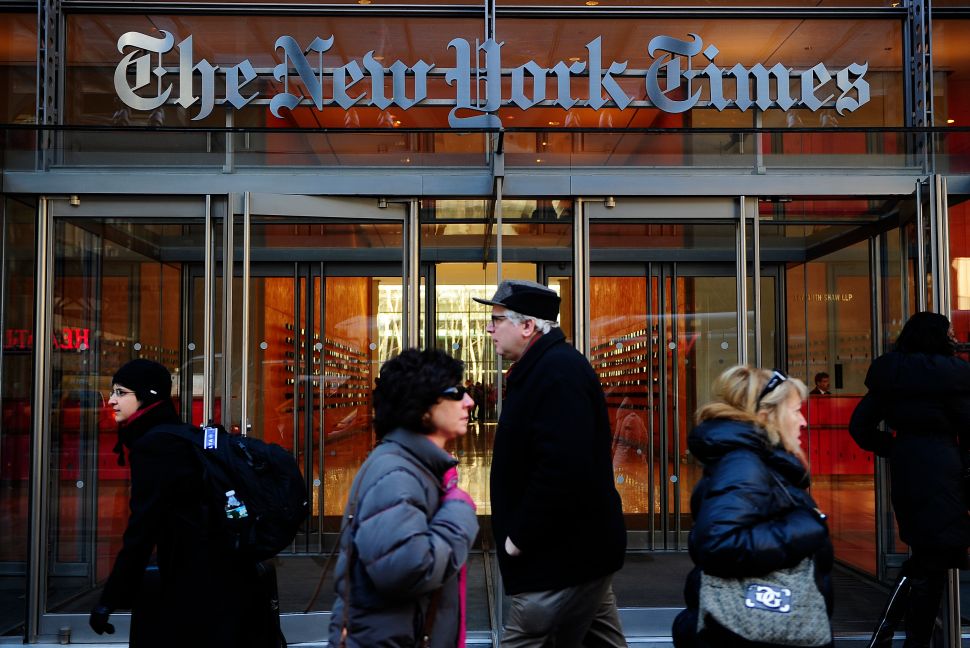