2016 has been one hell of a year, filled with one gloomy surprise after the next in both music and politics alike. And although our culture and consciousness has taken some serious blows with the passing of Bowie, Prince and Leonard Cohen (to name but a few) along with the grim prospect of an orange reality TV star and his right-wing cronies about to storm the White House, one must try and remain thankful, and count the blessings that remain.

Assembling a (mostly chronological) playlist of gratitude in such challenging times is a curious task. Obvious ditties as Maurice Chevalier’s “Thank Heavens for Little Girls,” complete with its creepy pedophiliac undertones, and the bobble-headed joy of the Beatles’ “Thank You Girl” (originally released as the B-side to 1963’s “From Me To You”) immediately bubbled up from my brain’s musty storage space.

But with a bit of thought, some research and a few annoying texts to my music nerd friends, I managed to cobble together a rather eclectic soundtrack with some historical perspective on the songs that I hope serve you well.

As with everything that Otis Redding sang there is an overwhelming sense of loss and regret roiling below the surface of his 1965 single “I Want to Thank You.” While the tune begins with memories of happier days, in which Redding jokes about teaching his girlfriend how to smoke, the song quickly unveils his deep remorse as he sings, “I wish I had another like you.” As the tune (released on The Great Otis Redding Sings Soul Ballads by Volt Records in 1965) begins to fade, “Mr. Pitiful” pleads despairingly, “I wanna hold you, please let me kiss you…”

Written by Isaac Hayes and Dave Porter, the Stax super soul duo of Sam and Dave still put some rock in your sock with the chugging funk of “I Thank You,” the hit single from their 1968 album, Thank You.

As incredible as the record was, their sweat-busting performance (complete with matching outfits and the horn section’s spirited dance steps) on The Ed Sullivan Show on May 25, 1969, took their raucous R&B to the next level.

Transformed into a grungy blues anthem by ZZ Top, “I Thank You,” would become the bearded boogiemen’s second Top 40 smash 10 years later in 1979.

Other versions of “I Thank You” sure to move and groove you include Bonnie Raitt’s slinky delivery on her 1979 album, The Glow, as well as ex-Free front-man Paul Rodger’s smokin’ rendition from his 2014 release The Royal Sessions, which features his trademark husky vocals over a crack session band.

Some songs manage to keep sounding better over time. One example of that rare phenomenon is “Thank You” from Led Zeppelin’s sophomore album, a song sung at thousands of weddings.

A vulnerable valentine written by Robert Plant to his then-wife Maureen, “Thank You” is wrapped in the shimmering notes of Jimmy Page’s 12-string guitar and a swirling organ played by the band’s multi-instrumentalist, John Paul Jones. Plant sings in a gentle, halting whisper in lieu of his usual Janis Joplin larynx-shredding shriek. “Thank You” later became a great vehicle for Page’s transcendent lead guitar work.

Sly & the Family Stone’s jubilant “Thank You (Falettinme Be Mice Elf Agin)” shot to No. 1 on the Billboard Hot 100 in February, 1970. A celebration of the Family Stone, the self-praise song name-checks (in its third verse) a handful of the band’s earlier hits, including “Dance to the Music,” “Everyday People” and “You Can Make It If You Try.”

Sly, Freddie and Rose Stone all share the vocals with the master bassist Larry Graham, driver of the Family’s funk truck. Sly later re-worked the joyous “Thank You” into the slower, ominous “Thank You for Talkin’ to Me Africa,” on 1971’s There’s a Riot Goin’ On.

Like the distorted curves of a funhouse mirror, the plodding beat and murky mix of Sly’s remake seemed to reflect the foreboding mood of the events of the early ’70s, from the escalating violence in Vietnam, to the skirmishes between the Black Panthers and the police on the streets of Oakland, New York and New Haven to the Attica State Prison riots.

Co-written and sung by Fairport Convention’s stout but nimble fiddler Dave Swarbrick and the band’s brilliant guitarist Richard Thompson, “Now Be Thankful” was released as a single for their October 1970 release Full House.

Drenched in harmonies, the lyrics contain strains of poetic hippie optimism such as: “The red rose blooms for all to know,” which although twee, seems refreshingly sweet considering the state of the world these days. Richard & Linda Thompson would record a stellar live version of “Now Be Thankful” in 1975.

A righteous soul ballad written by Bonnie Raitt for her self-titled debut 1971 album, “Thank You” is sheer delight as her voice slips and slides over a gospel tinged keyboard, punctuated by a mellow chorus of horns.

And while we’re on the subject of horns and the gospel tinge, the title song to Earth Wind & Fire’s 1975 double live album Gratitude has no shortage of soul. Bassist Verdine White lays down a deep groove as Maurice White (yet another casualty of 2016, R.I.P.) and Phillip Bailey exuberate gratefulness:

“Verdine White is doing everything on this track to remind people that slap and thump bass when done properly are insanely cool and funky,” explained bassist/composer Adam Dorn a.k.a. Mocean Worker.

“The track benefits from a deep bass line played with his fingers and accentuated by pops and pulls, that only Verdine can pull off. This is an extension of Larry Graham’s technique. And Mr. Graham,” as Adam reminds us, “is the funkiest motherfucker on earth!”

On Thanksgiving Day, November 28, 1986, William S. Burroughs composed a “Thanksgiving Prayer” dedicated to John Dillinger, “in hoping he is still alive.” The prayer, delivered in the Gentleman Junkie’s perturbed monotone is more a litany on the violence, racism, oppression, and homophobia that has plagued America since the extermination of the Native Americans, who Burroughs sardonically thanked for providing “a modicum of challenge.”

The poem first appeared in the chapbook Tornado Alley, published in 1989, then made its way onto an album called Dead City Radio the following year in 1990 and was eventually shot as a surrealist video by Gus Van Sant.

Produced by Hal Willner and Nelson Lyon, Dead City Radio was a collection of Burroughs’ caustic readings (featuring excerpts from Naked Lunch, “The Sermon on the Mount” and “The Lord’s Prayer”) with musical contributions from John Cale, Donald Fagen, Lenny Pickett, Chris Stein, and members of Sonic Youth.

“Nelson recorded William reading the piece at his house in Lawrence, Kansas, in 1987,” Willner recalled.

“Then we brought the tapes back to New York and I dropped some stock music from the NBC library behind it, something called ‘Washington Monument.’ The prayer is totally relevant with what is going on today. It’s all there—the ‘country of finks,’ the KKK, the horrible treatment of Indians and the corporate hypnosis of America…. It’s the piece I am probably most proud of ever having made.”

Alanis Morissette wrote “Thank U” (released in 1998 on Supposed Former Infatuation Junkie) after traveling to India in 1997. She desperately needed to drop out following the enormous success following Jagged Little Pill. So she took a year off in hopes of connecting with spiritual side of life and perhaps finding some inner peace.

“When I did stop and I was silent and I breathed…I was just left with an immense amount of gratitude, and inspiration, and love, and bliss, and that’s where the song came from,” she explained in an interview.

Not surprisingly there was a minor hullabaloo over the accompanying video to “Thank U,” in which Alanis appeared naked walking through the streets of Los Angeles. Yet somehow her wandering brown eyes revealed a stronger sense of openness than her nude body. Through this soul-searching experience Morissette began seeing everyone and everything in her life as a teacher.

“ ‘Thank U’ is basically a gratitude list in song form,” said singer-songwriter Sam Parton of Canadian folk group The Be Good Tanyas. “She’s celebrating her own vulnerability, but she’s also asking the listener to do the same. Like, how about we all break open here for a moment, together? Yeah, ‘How about unabashedly bawling your eyes out?’ Sooner or later some shit’s gonna get real, whether it’s death, illness, ruin or loss and it turns out that the path forward, the way to life, is gratitude, and making friends with our vulnerability. It feels good to show our true selves. We discover ourselves through gratitude, even for the bad stuff. That’s how we heal and that’s how we learn to love ourselves. Great song.”

With heart in hand and tongue in cheek the Barenaked Ladies’ 2001 breakup anthem “Thanks That Was Fun” (from their album Disc One: All Their Greatest Hits (1991–2001)) may be the best back-handed thank-you song ever written. A slow dirge, buoyed by a fuzzy lead guitar riff, the song is chock full of bitter/sweet lyrics like “I’m burning all your stuff, but that’s not enough.” It definitely makes you wonder if this bunch of fun-loving Canadian dorks may be darker than they appear.

Our Thanksgiving playlist ends for now with Fallout Boy’s 2007 crunchy pop hit “Thnks fr th Mmrs,” a “disemvoweling” (removing the vowels) of the phrase “thanks for the memories,” as explained songwriter Pete Wentz. The lyric portrays a relationship which has gone stale, yet the pair of jaded lovers continue going through the motions, out of convenience or laziness.

“Thanks for the memories, even though they weren’t so great,” FOB howl. But ultimately it’s the chimps playing violin, chess and holding hands with Kim Kardashian that enabled them to crash this party. 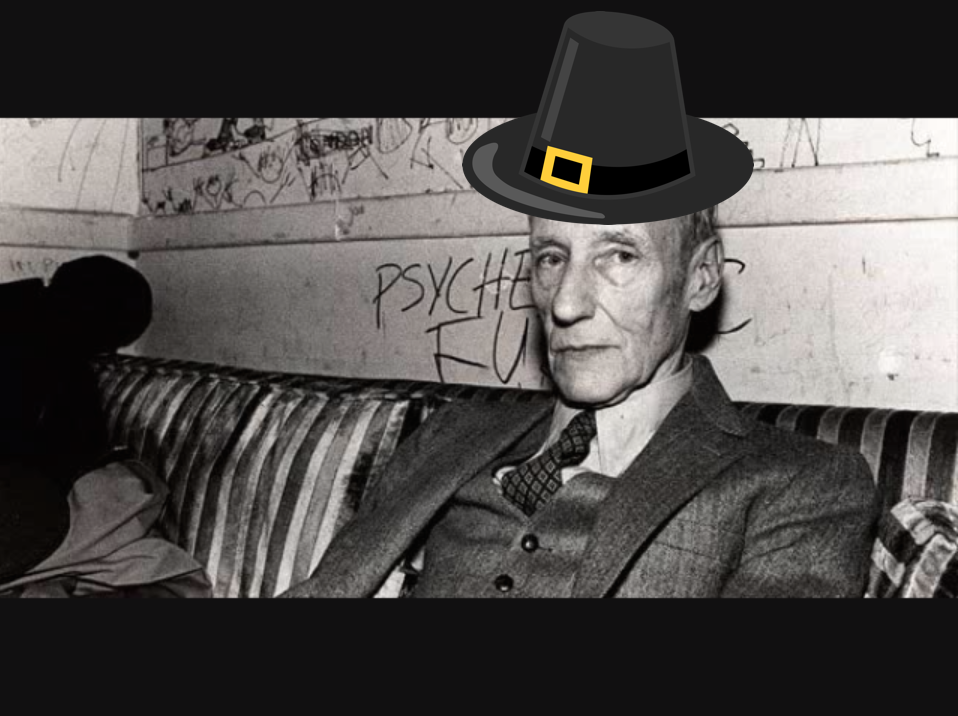