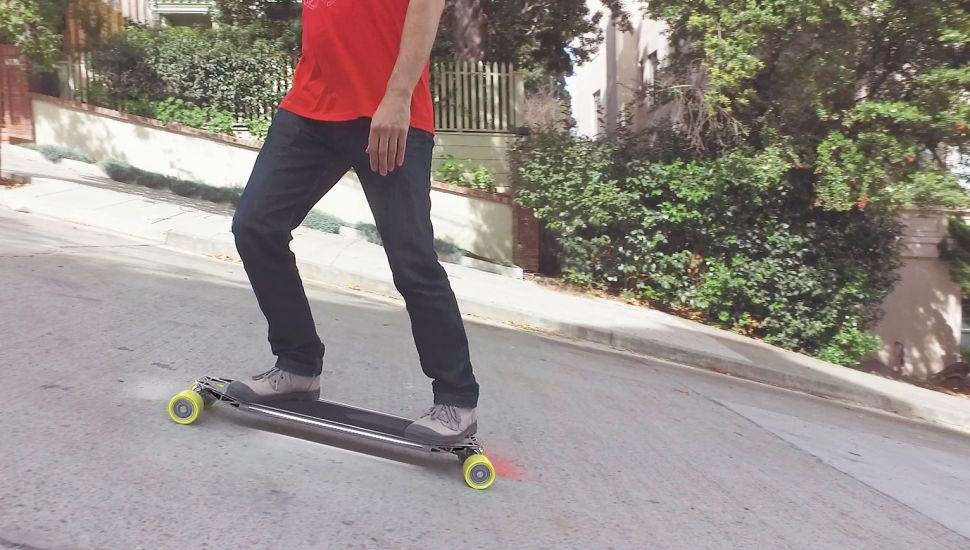 One of Acton’s Qu4tros carries its rider uphill. Courtesy of Acton

This is an embarrassing true story: I tried to learn to skateboard after 30. I bought a Girl board off someone on Craigslist and started skating over to this empty parking lot on the weekend and tooling around. I think you need that reinforcement of hanging out with a bunch of people and practicing together to get past the point where you can stay on a board and on to the point where it’s really a comfortable place to be. No, I never did an ollie.

I thought skating would be a great way to speed up short trips from my office to downtown meetings in Philadelphia, but that was only true if I didn’t mind arriving sweaty. And then there were hills. Hills were awful, but you know what helps with hills? Motors. With motors, riders don’t have to kick. It also turns out that staying on the board becomes a lot easier when you aren’t kicking. All you have to do is guide it by leaning.

There’s a company that puts motors inside very small wheels, and it has started motorizing skateboards, Acton. It has an Indiegogo campaign running right now to fund an electric skateboard that crushes hills with motors inside the wheels, which are called hub motors. The nice thing about hub motors is that you can kick if you want, which sets them apart from belt driven boards (which came along first and probably drive any electric boards you’ve noticed already), according to Peter Treadway, the CTO and cofounder of Acton.

“It’s this relaxed way of getting around,” he said after we got done trying the boards out for a while.

I met with Treadway at the end of last week in Battery Park and tried two of his prototype boards. On my very first ride, on the smaller of his two new boards, the Blink S, we went through the park, interweaving with a bunch of people walking along toward Castle Clinton monument, mostly on the way to the boats for the Statue of Liberty. I never fell off. I didn’t hit anyone.  It was a great victory for a first ride. I also went very slowly.

The surprising part of riding an electric skateboard is that you drive it with a remote control (usually). It has both an accelerator and a brake. Like a gas pedal, the further you push the accelerator, the faster it goes. The only piece of advice Treadway gave me before riding was to lean into the acceleration. I never really got the hang of that, but I never lost the board out from under me, either. 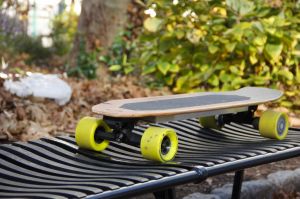 Having brakes is nice for beginners, providing more control going downhill. Also, they are designed to recapture some of the power that they send back to the battery whenever they are applied.

Treadway hopes that with the rise of the hoverboard, standing vehicles without a chassis will become more normal to consumers. He would like to see electric skateboards become part of the American transportation portfolio, one solution to the “last mile problem,” the difference between a commuter’s home or office and the first station they have to reach in their local mass transit network.

Personally, either of the boards I tried would have been great on my idyllic college campus. I actually worked on another campus a few years later, where some students were quite fond of using scooters. Electric skateboards would have taken up a lot less space in everyone’s lives. When I lived in Philadelphia, my place was about a mile from the nearest subway stop, but I didn’t like skating it because it was all uphill. Any of these boards would have solved that and let me leave for work slightly later. That would have been a plus, but I’m not sure I would have had $399 to spare (the price of their least pricey board) to solve that problem.

I should add that during my brief skating period, I found that dealing with my skateboard and whatever bag I had with me was a bit of a pain. Treadway got cagey when I asked if that might be something they are working on (perhaps designing a bag that’s easy to strap a board into).

The Blink Qu4tro, a 4-wheel drive hub motor board. Courtesy of Acton

And as much as I support the multi-model transit world, it’s a little hard for me to believe that regular people will soon get over the image associated with skateboards. Can I imagine a world in which a guy who wears a tie every day would ride an Blink to work? It’s tough. There was this one dude I used to see rollerblading in a suit every morning near D.C.’s Thomas Circle in my younger days, but he was very much an exception. I’d like to think he presaged a future of e-boarding commuters, but it’s tough.

There’s also the minor problem that these kinds of devices are illegal in lots and lots of place. As we’ve previously reported, though, transportation is due for a major shake up. Maybe as self-driving cars change our relationship to automobiles, it will also open up the possibility of a world that’s friendlier to more kinds of transportation?

Some people might be wondering about safety. I’m a bad guy to ask. I kind of go to sleep when the topic of safety comes up, but Treadway had a good point on that topic. The nice thing about skateboards, he said, is that everybody who gets on one expects to fall off at some point, so it’s no great surprise when they do. “I wish everybody would look at every vehicle that way,” he said. 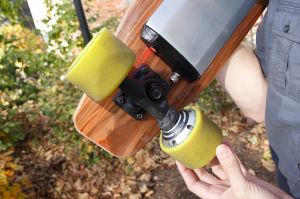 This view makes it clear that this is a skateboard wheel with more than meets the eye. Brady Dale for Observer

Acton already has several products on the market. It has a scooter and electric skates. It also has one electric board for sale already. It is a smaller and slower board than any of the three in this campaign. We tried prototypes of two of the boards seeking funding now, the Blink S ($699) and the Blink S2 ($999). The Blink S has a max speed of 15 mph and a range of 7 miles. The S2 reaches 18 mph and doubles the former’s range.

The Maserati of the line is the Qu4tro. This one will appeal more to the extreme sports type with money to burn, Treadway predicted. It will hit 23 mph and go 22 miles. The Quatro’s remote attaches to the board and doubles as a handle. It will cost $1,699 to anyone who doesn’t pre-order it now (all three boards have big discounts if purchased in the Indiegogo campaign).

The campaign, by the way, has blown through it’s goal 10 times over. Since this is a company that has already gotten several products to market, buyers should feel relatively confident that it should be able to get these out on time.

These aren’t the only electric skateboards out there and they aren’t the only ones with hub motors. Among such boards for sale now, there’s the M1 ($1,399) and the Carvon EMCX ($999)—the Stary board ($899) is up for pre-order. Eon is offering a kit that lets you install a motor on an existing board, but this eliminates some of the ground clearance that these other boards have.

Will these boards ever get adopted beyond the adventure sports or mobile dancing crowds? I would love to imagine a world where moms in pantsuits coast their kids to work and then roll on to the office. It’s a little hard for me to believe that vision will come true, but I like it.