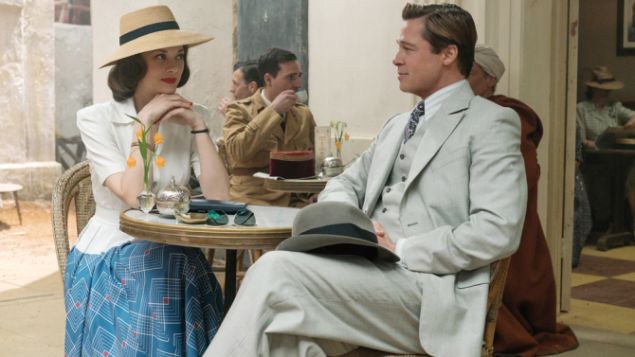 Beautiful, bold and blazing with sex and suspense, Allied is a gorgeously photographed, intensely romantic, action-packed film by the great director Robert Zemeckis with two titanic star performances by Brad Pitt and Marion Cotillard that delivers something for everyone. If you love classic movies and their potential to sweep you up into a world outside of your own experience, this one will rock your world.

With his valuable penchant for getting straight to the point, Zemeckis’ best film since Cast Away begins in the middle of a sand dune in the chalk-dry desert of French Morocco. Into this barren wilderness of heat and sand parachutes Brad Pitt, playing Max Vatan, a Canadian pilot working for British intelligence whose job is to find and team up with French resistance fighter Marianne Beausejour (Marion Cotillard), a resistance fighter in the French underground with high social connections in the Nazi party.

The year is 1942. Their assignment is to pose as man and wife in order to blow up a gathering of Nazi officials at a lavish party in Casablanca that will severely deplete the German war effort in North Africa. One unspeakable rule: They must not fall in love. Sex is a weakening distraction that could leave them vulnerable as open enemy targets. Well, as natural human weakness always goes, his movie-star glamour in white tailored Panama suits and her moist-lipped, almond-eyed seductiveness in low-cut period gowns are irresistible. Sharing a hotel room in close proximity, their mutual attraction gives in to overwhelming sexual attraction, and they fall in love and lust in a feverish sex scene inside a car in the middle of a devastating sandstorm. This is followed by a brutal scene of carnage in which the two lovers, charged by their new sexual energy, manage to wipe out the entire German embassy ball against all odds with submachine guns—a scene that does, in retrospect, seem a bit far fetched. But never mind. They splatter blood all over the hanging swastikas with such excitement and relish that the scene could have been choreographed by Quentin Tarantino.

But that’s not all. The narrative arc is just beginning. Back in London in the middle of the Blitz, married and settled down with a new baby in a modest house with a garden in Hampstead, Max is devastated when his superiors inform him his wife is suspected of being a German spy acting as a double agent and the death-defying massacre they carried out in Morocco is believed to have been an actual secret order from Hitler himself to kill off the German ambassador. Worse, Max is now ordered by British intelligence to execute Marianne with his own hands, and if he fails, he will be hung for treason. The dilemma is greeted first with rage, then insult, and then by the torturous irony of love disrupted by fate. After one hour of getting to know these people, the real suspense begins—for both Max and the audience. Can Max prove his adored wife and the mother of his child innocent before British intelligence declares her guilty of war crimes? How can he ever trust her again? And if she is a Nazi espionage agent, what can he do to save her? There isn’t a wasted minute in Zemeckis’ forceful direction, or in Steven Knight’s carefully calibrated screenplay, including an emotional life-changing, hair-raising finale on a British tarmac that will give you goose bumps the size of walnuts.

With trembling feelings simmering beneath the surface, the chemistry between Pitt and Cotillard is palpable. Think Cary Grant and Ingrid Bergman in Hitchcock’s Notorious. In a romantic, emotionally charged love story that blossoms like London pride flowers once budded in the falling bombs from the broken pavement of the Blitz, Allied keeps you guessing from start to finish. The craftsmanship Zemeckis is famous for does not disappoint, in scene after scene off accurate research, from the Bogart trench coats and Alan Ladd leather pilot jackets to the big band jazz of a better time in music. Movies set in the 1940s still reflect the best period in history for clothes and grooming, when people looked smart and glamorous, and it’s a great makeover for the two stars here. When he’s scrubbed and closely shaved with short hair and tailored suits, there’s nobody in the movies today like Brad Pitt. Looking buff and camera-ready, with just a few mature lines around his eyes, he’s at the top of his game. And Marion Cotillard models exquisite gowns and appears more dazzling with a flattering pageboy hairdo that could have been designed by MGM’s legendary Sydney Guilaroff than she has ever looked before. Playing myriad emotions—devoted and caring mother, mysterious all-seeing secret spy, and erotically charged lover balancing passion, duty and deception—she does it all to perfection in her finest work on film since her Oscar-winning role in La Vie en Rose.

Allied is saddled with an unfortunate title open to varied interpretations, none worth the bother. But don’t let that detain you. See it and revel in the kind of terrific, dramatic and completely satisfying movie they don’t make any more. 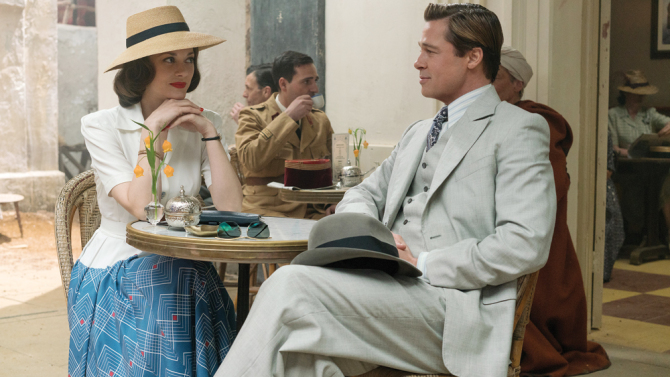