“Yeah, Milo. Racism is scary. Patriarchy is scary.” Trust American Horror Story to not only be timely and appropriate in its underlining themes, but to find a meta way to pat itself on the back for it. The conversation around race and family this season has been on point, and the show serving up flawed, beleaguered characters like Lee, Monet, and Dominic (fictional and otherwise) helped, in segments, make this more than just another year of a dumb Ryan Murphy show. There are glimpses of how the world reacts to black celebrity, how rural societies react to black families, and of course how we react to black violence (The Polks get a thoughtful, Frances Conroy-led retelling while Lee is assumed a murderer the moment the show airs, her actual guilt notwithstanding). For its narrative plodding, there has been real, wonderful character work this year, not just by the actors but by everyone involved. It’s clumsy, but it’s pointing a big neon sign at its message, and that’s to be commended.

The fact that neon sign comes in the form of a conversation between two white college students is also telling in its own way. I guess it’s nice the writers wanted to make their point absolutely explicit, but it also feels oddly self-congratulatory. “Here are our themes! We’re woke! Just wanted to make sure you all got that!”

And obviously, discourse gives way to a hefty, horror narrative almost immediately. Which is what we came for. The three college students traipsing through the woods Blair Witch-style are on the hunt for the Roanoke Nightmare house, to catch a glimpse of the filming of season 2, and to have some fun on the set of their favorite TV show to ring in the blood moon. The group is led by Sophie (Taissa Farmiga, in a sadly thankless, small role, given her abilities), an avid fan of the show, and someone who can afford a whole host of Go-Pros, apparently.

American Horror Story once again benefits from widening its lens. The show picked up speed when we got behind the scenes of the Roanoke story, and adding some gonzo-filming fans into the mix adds another cool element once again. Without expanding the range of the conversation and the impact of the themes, this would have been a pretty by-the-numbers macguffin-led episode with bloodshed in all the expected places.

Over at Scary House HQ, Audrey and Lee hold commune with Dylan, who’s pig-manned up and ready to frighten the housemates, only to find there are only two surviving. His function in this episode rarely extends beyond a bit of galvanizing (and a wonderful gag of him, in full pig-man regalia, riding his Uber to the house in silence)

Of course, the big fallout this week is Lee admitting on-camera she killed Harris. She’s still desperate to get that tape back, and army vet Dylan is on hand to help raid the Polk farm for the evidence (Lee presents this case under the guise of also collecting the footage of Audrey smashing up Mama Polk and rescuing Monet.)

The siege doesn’t last very long at all: Dylan is, naturally, apprehended nice and quickly, and the footage is recovered after a brief struggle with the remaining Polk clan.

There’s more running about by everyone, sending Audrey and Monet back to the house, where they check out that video. During Lee’s confession, we see her apprehended by the Wood Witch (we still not got an official name for this ‘un?) and fed a heart, just like The Butcher in the mythology reenactments. There’s a new Butcher in town, folks.

Butcher-Lee is quick to dispense with Monet, who didn’t trust her from the beginning, and the story’s endgame only becomes apparent after Lee is “rescued” by the cops (who, the students note earlier, only ever show up after it’s too late.) The nightmare has one last chance to get a shot in, though, as Audrey is shot dead by the cops after seeing Lee being escorted to safety and trying to kill her herself, which is an extremely dumb moment totally in-keeping with Paulson’s character.

Whatever happens to close out this season next week, it’s been a banner year for American Horror Story. It’s shown self-awareness, humor, and, dare I say, restraint in places that I honestly didn’t think it of its showrunners were capable of. Its preoccupation with identity, both perceived and internal, as well as the layers of storytelling, have been ambitious and an absolute riot to watch. There’s a wonderful beat, tucked in about halfway through the episode, where Sophie holes up in the producer’s cabin and watches a live feed of the house. She calls Audrey and Monet by their character’s names, and comments on the events unfolding like she’s watching a TV show herself. “You need a clear head!” she shouts at the monitor as Monet takes a drink. Yelling at American Horror Story: we’ve all been there, Sophie. 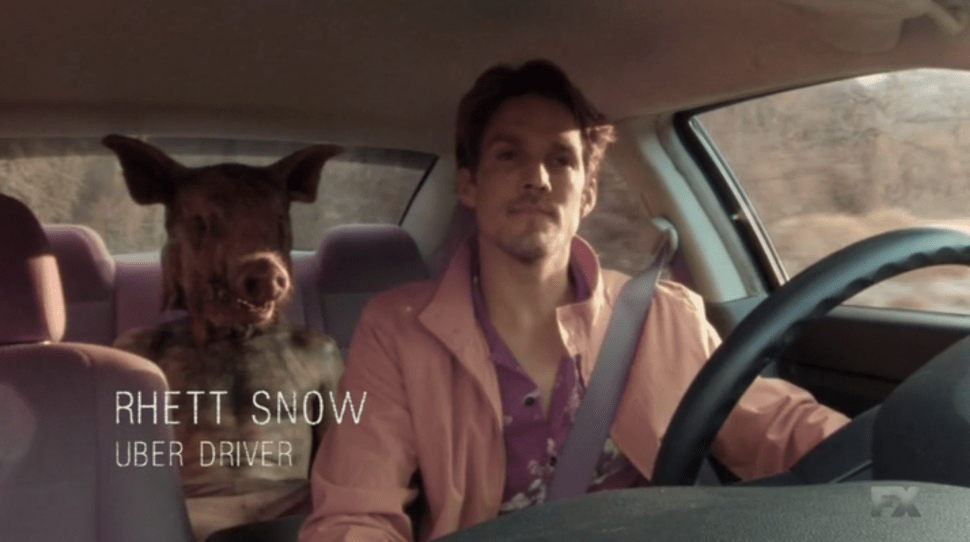