In 2014, the same year he was diagnosed with cancer, David Bowie pleaded with Scotland to remain in the United Kingdom. He’d always had love for the country, even considering becoming a Scottish Monk in the ’60s, and amassing a large collection of Scottish art. So that vote to secede caused the Brixton-born chameleon some pause. Accepting an award on Bowie’s behalf at the Brit awards, Kate Moss pleaded, “Scotland, stay with us.”

Scotland voted to remain in the U.K., but you can’t look back at that incident and not see the same shades of nationalist rhetoric that now threaten us at home, bubbling to the surface. Before the Brexit, and a potential future Mexit, there was Scotland—a country where the vast majority of poor folks are white and pissed off. A city like Glasgow is known, among many things, for its danger, showing that crime is not always caused by ethnic catalysts after all.

In the modern rock ‘n’ roll pedagogy, though, such despondency has given Scotland some strong identities. World-renowned “indie pop” bands like Belle & Sebastian, The Vaselines and Camera Obscura still managed to create major chords in Glasgow, parting the clouds with a sunniness so happy-go-lucky it sounded subversive and witty. I’d argue that shoegaze was born there, too—while Creation Records was a U.K. label, its champions, The Jesus & Mary Chain and Primal Scream, were Scots.

Long story short, the creative exchange between Scotland and the rest of the world has long been important to the country’s modern cultural identity. And no one playing music right now knows this better than Gary McClure, the Scottish mastermind behind indie-pop band American Wrestlers.

“You kind of just accept that no one’s ever gonna listen to this shit.”—Gary McClure

American Wrestlers allows McClure to co-opt the exported sounds of his homeland into something new, fresh and equally subversive. In 2013 McClure ended his Manchester-based shoegaze project Nuclear Free City with creative partner Phil Kay, and began working on something for himself. Those demos caught the attention of an American woman, Bridgette Imperial, whom McClure moved to St. Louis to marry in 2014.

While working at a UPS facility in St. Louis, McClure conceived what would eventually become the first, self-titled American Wrestlers album. The venerable label Fat Possum heard it, rereleased it, and soon Imperial and McClure put together a proper band.

This month saw the second American Wrestlers LP, Goodbye Terrible Youth, drop at the perfect time in our political zeitgeist. From the opening track that looks at the tainted legacy of former British Prime Minister Margaret Thatcher onward, thinking about the government becomes a waste of time, and the privilege of legacy does not always belong to those who deserve it. “Throw it to the wolves, they said, and we’ll divide,” sings McClure. “Someone far away from here will put it right.”

There’s an urgency to these songs, and it’s only amplified by our post-election ennui. And if there’s any solace from the rise of nationalism to be had beyond the comforting catchiness of his melodies, McClure’s still searching for it himself.

Nonetheless, our recent conversation about the nature of legacy feels very relevant now. Sometimes you have to uproot yourself from your immediate surroundings to discover that, thousands of miles away, the same inwardly-directed energy and race-baiting paranoia exist. For the past two years, McClure’s been learning that stateside. Thankfully, we have the catchy wit, wisdom and perspective of American Wrestlers to hold up the mirror.

Happy album release day. How does it feel?

It feels good. I’ve just woken up, so I’ve yet to find out if…I don’t know. With reviews, especially for someone at my level, it’s not always someone who’s into the band first, you know? Not everyone’s gonna get it.

Reviews often fail with context. So these stories of mine are never really about one thing. This one’s about the American Wrestlers record, but it’s also about you—a dude who moved to St. Louis from Scotland. That’s really interesting to me, especially with all that’s going on politically right now. And you’ve got that song about Thatcher. So let’s get into the nitty gritty. What is an American wrestler?

Well it’s so hard to pick a name, just a nightmare, man. I’ve spent so many hours in bars, just talkin’ to friends, and everything sounds stupid and feels humiliating. It’s almost like choosing a name for a gang when you’re a kid or something. It works because it’s something people recognize, and it’s not hard to remember. Phonetically it’s kind of nice, the lettering and stuff. Then after I chose the name it took on connotations of what’s real and what’s not, all that stuff. Presenting an image to the world.

So the idea of wrestling’s pageantry became a part of it, a big fake horror show?

Yeah, and nowadays a lot of bands are like that. A lot of bands have always been like that, haven’t they? You know the way in the ’80s, ’70s and ’60s that a lot of labels could manufacture a band. I think there’s a lot of stuff in the indie scene now which is the same, people manufacturing themselves, almost. People become very good at faking it, you know?

Well you Scots have a history of going the other way on that. Your no bullshit threshold is pretty high. I’m thinking of Jesus & Mary Chain and that whole culture. Of course putting a name on things is reductive, but there’s totally some shoegaze in your music. Some power pop, too—I don’t know how you feel about Belle & Sebastian, but for all their sunny disposition they made some really deep records.

And I hear the genres that you’ve embraced more as a cultural comment than a sonic one if that makes any sense.

Yeah. I get so confused when I’m doing it, trying to find my own place in music, deliberately rejecting some things and choosing somewhere where not a lot of people are, you know? You mention shoegaze, and I think that’s probably embedded in me somewhere because I spent so many years doing it. And there are things Belle & Sebastian have taught me to love as well. I totally love ’90s rock and things like Mark Kozalek, Mac Demarco, Courtney Barnett, all that stuff.

I have this picture of you in my head sitting in a UPS shipping facility, holding a deep reverence for being in Missouri and channeling those sonic traditions from a few degrees removed. How did that move affect you creatively? How can we understand that in context of the genesis of this project?

You’re totally right. It’s kind of like that show Quantum Leap, it’s different from a vacation. It’s almost like I removed myself from the life I’d lived by a couple of decades, like taking your entire life and totally switching it. And when you do that you can see the bigger picture of how your life used to be.

And you’re also transplanted somewhere for the first time, you get the full living experience. You see the real-life America and your past life at the same time, the juxtaposition of those things. I felt a lot freer to do what I want to do. Before I thought I was totally free, but there was maybe a feeling of being criticized by my peers.

That perspective isn’t just personal either, you get pretty widescreen on this record, too. I’m interested in talking to a Scot about what’s going on in this country and how it mirrors the Brexit and England’s whole bout of ratfuckery. This is a political record, not in a grotesque way, but subtly. That song about Thatcher sounds personal, but you carry the themes of looking at government through the whole record. Can you unpack that a little?

Well, [laughs] it’s been a very intense year, hasn’t it?

The last gasp of a dying white class.

It’s totally like that, yeah. I thought Brexit was gonna be a total landslide the other way, and that worries me for what’s gonna happen here. You never know, man.

But the Scots found a way to preserve their tradition and not be isolationists, right? I’m trying to understand it.

I’m trying to understand it, too. I was very surprised here at the level of racism. Some people can’t see it anymore, but certainly in Missouri, every job I go to, the bosses are all white. And the low-level workers are all black. And all the people in the rich area are all white. The cops in Britain will pick on young white kids, because it’s usually the young white kids who don’t have the money. The people who don’t have the money always get picked on by the cops.

The War on the Poor?

Yeah, which happens here, too, and it’s totally social. But as far as the record’s concerned, “Vote Thatcher” was totally a personal thing. About someone who’s trying to deal with the idea of legacy and how much it matters. When it’s the ninth album and you’re still not getting the recognition you wanted when you were a kid, there’s a lot of questioning of that. You kind of just accept that no one’s ever gonna listen to this shit. What does it mean if no one listens? Does it matter? Should it matter? There’s this idea that Thatcher died, but she’s still around, you know? The world never changes.

Well I had total creative control of the last two records, the other guys just play. I used to write with this one other guy, Phil Kay in Nuclear Free City. There were well over 2,000 songs we’d found that were unfinished. We’d write every day, man. And it just got to this point where I couldn’t work with anyone anymore. I just had to do my own thing. But it’s totally easy working with Bridgette. Maybe we just have that kind of relationship. A lot of people just can’t wait to get away from the wife, you know? We’re cool with that, and she’s a great musician. They all are.

Does your Scottish identity ever get fetishized in the U.S.? I know you’re in a big city, but is it easy for you to feel like a regular dude when people are always recognizing you aren’t from around there? And does it work its way into your creativity at all?

I don’t know about that. People ask you where you’re from, and you say Scotland, and they say, “Oh, my grandmother’s Irish.” That happens a lot. They just love the accent. I actually get away with so much shit when I work a job because of it. I just slack off all the time and do nothing. They just assume that I’m working hard down the line. It’s weird, man! 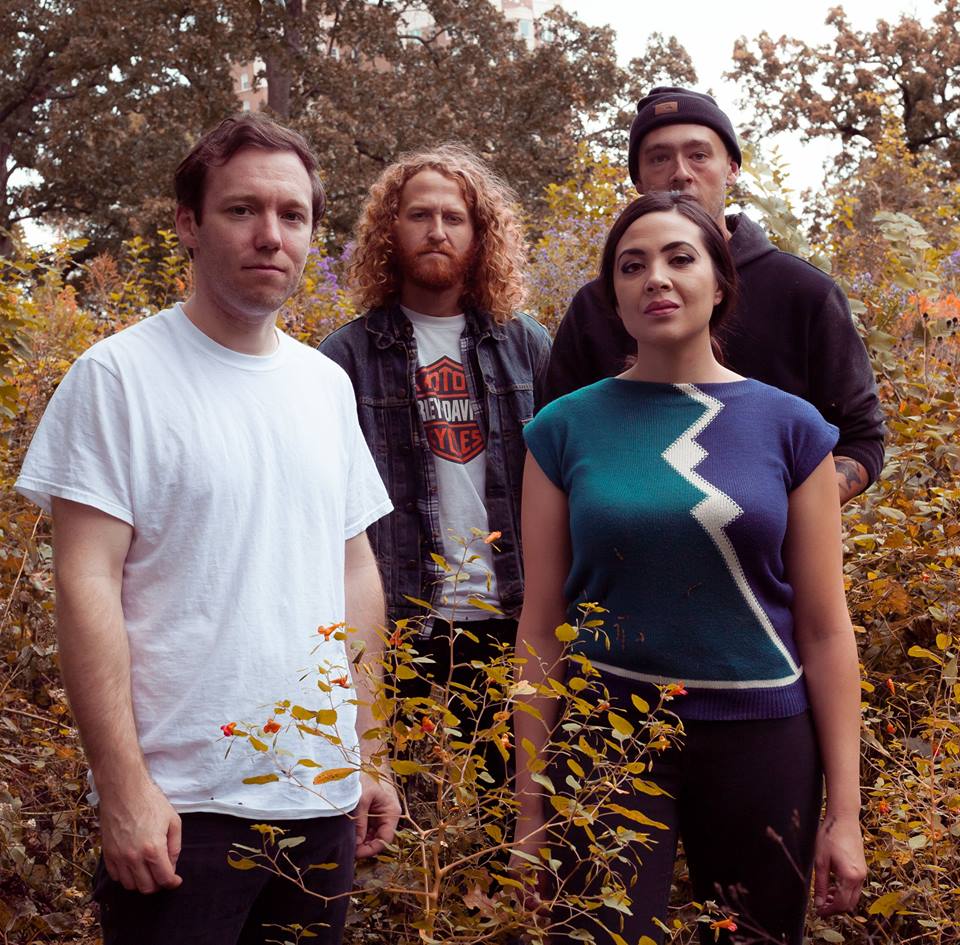