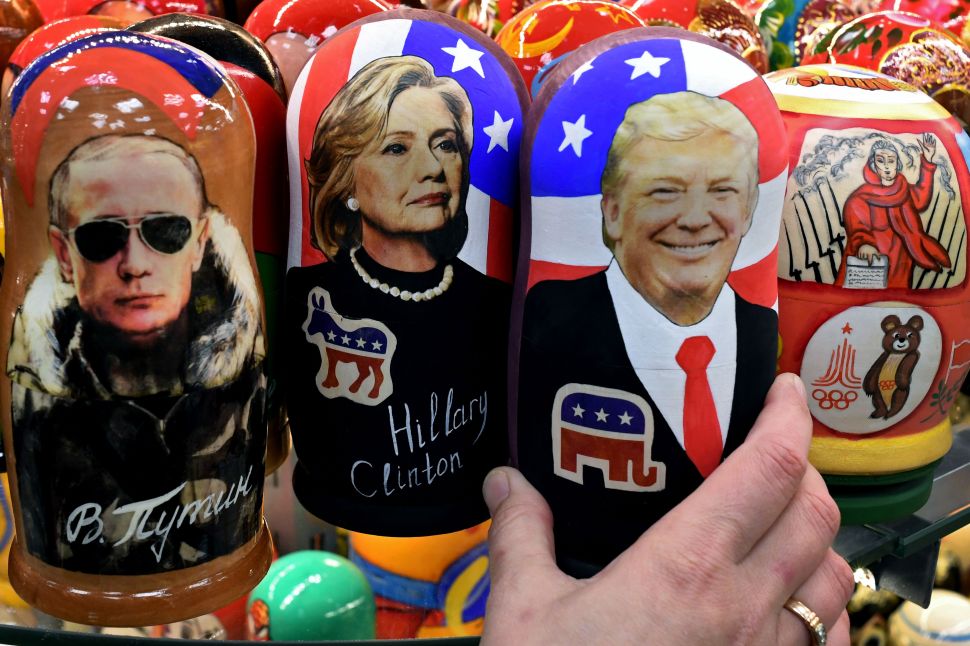 On the morning of November 9, triumphant Russian parliamentarian of United Russia’s pro-Kremlin party, Vyacheslav Nikonov, burst into Russian Duma with great news: “Colleagues, three minutes ago Hillary Clinton accepted her defeat in the U.S. presidential elections and just one second ago Trump began his speech as the U.S. president-elect!” Russian Parliament exploded with applause.

The Nationalist LDPR party, whose leader Vladimir Zhirinovsky stubbornly predicted Donald Trump’s victory against all odds, offered champagne to everyone in Parliament to celebrate the occasion—132 bottles were delivered to the Duma for the party.

Margarita Simonyan, editor-in-chief of RT and Kremlin foreign propaganda mouthpiece, lost a bet for two cases of beer. Simonyan was sure the presidency would go to Hillary Clinton, but was happy nonetheless, and hung the U.S. flag from her car for the day to celebrate Trump’s victory.

“This is how I have been driving today—from one window, our flag, from another, the American one. I am signaling ‘peace,’ ‘friendship,’ ‘bubble-gum’” she wrote on her Twitter. (Simonyan’s reference was an idiomatic expression stemming from the days where buying chewing gum was as much of a miracle as meeting a real American—or any foreigner, for that matter.) She added that if President Trump would recognize Crimea as part of Russia, lift sanctions, find common ground with Vladimir Putin on Syria and free Julian Assange, she would retire because “the world would be beautiful.”

At 6:00 p.m. local time, Trump supporters in Moscow gathered at the gates of the U.S. Embassy to celebrate his victory. A brass band started “Bravura march,” and was quickly interrupted by police. The event organizer, named Alexander, assured the police that theirs was not a political act but rather a “sincere impulse by regular citizens to congratulate our [American] partners with the election of a normal President and with the victory of the party of peace.”

As reported by RIA Novosti, the sale of books written by or about Trump jumped four times in Moscow on the day his victory was announced.

On this historic day, the joy of Trump’s victory was not limited to the Russian capital only. Far from Moscow, in the Siberian city of Omsk, local bus drivers let passengers with Trump posters in hand ride for free.

But not everybody was happy in Russia.

Even before the brass band tried to bring some joy to employees of the U.S. Embassy, the all-too-familiar sign of great tragedy—“Je Suis U.S.A.”—candles and a bouquet of carnations were delivered.

The horrible news of Clinton’s loss was delivered to Russians via Twitter and Facebook by ex-U.S. Ambassador to Russia, Michael McFaul. A staunch Clinton supporter, McFaul was accused by Russian authorities of orchestrating colored revolutions in Moscow. McFaul’s Twitter and Facebook posts are must-reads for anti-Putin and pro-American Russians.

“You voted for Hillary,” one joyful Russian follower jumped into the conversation. “Are you going to take advantage of Madonna’s offer?” (The pop singer promised oral sex to everyone voting for Clinton.)

‘Even if Melania has not been an escort girl, she looks exactly the way very expensive escort girls look like.’

“I don’t understand your question about Madonna. Write in English?” the ex-Ambassador, who is a Grateful Dead fan, tweeted back.

“If you do not plan to take advantage of it, could you cede your right to me? I am sooo interested,” the persistent follower continued.

“Thank you for [sic] translation,” McFaul replied, killing the conversation.

His mood became sober: “Putin intervened in our elections and succeeded. Well done”—the last two words were in Russian. McFaul was losing the desire to joke, and the post was immediately deleted. “SHOCK. I am in shock,” he continued on Facebook.

His words—to paraphrase Vladimir Lenin—woke up the opposition.

It was snowing in Moscow when, at 9:43 a.m., Varvara Tourova, a Russian opposition activist, actress and journalist, reacted to the news of Trump’s victory with just one word: “FUCK.” Four minutes later, at 9:47 a.m., she posted a sentence that reflects the best the attitude of anti-Putin’s Moscow toward the results of the U.S. election: “I officially refuse to recognize the existence of Donald Trump. Thanks for your attention.”

At 10:13 a.m., Ilya Yashin, one of the leaders of the opposition PARNAS Party—which pathetically lost the last election in Parliament—opened the wound on his Facebook page: “The morning began with a call from the journalist of the respected western agency with a question: ‘Ilya, can you comment on this fuck-up?'”

United in its grief, Russian opposition had no comments. The idea of Clinton losing the presidency to Trump—who promised ‘to get along’ with Russia—had not been considered, even hypothetically. “There will be no immediate catastrophe,” was the most optimistic post, made by Grigory Yavlinsky, leader of the Yabloko Party.

“Hillary. Forever.” Natalia Pelevine, a prominent PARNAS activist, posted toward the end of a bitter day.

Gary Kasparov, world chess champion and anti-Putin opposition activist who lives in self-imposed exile in New York, on the morning of Election Day called a possible victory by Trump “a gift to Putin sent from heaven.” He talked of nothing but chess on his Facebook page for the three days following the election.

For the first time, anti-Putin opposition in Russia felt betrayed by American voters and, one had to admit, lacked the class not to show its displeasure with the American electoral system. Not ready to admit the loss of their candidate, Russians projected their dislike of Trump on anything and anyone associated with his victory—both American voters and Donald Trump’s family.

Future American First Lady—”chauffeur’s daughter”—was the first and the most convenient target.

On the night of the first shocking day, during a live radio talk show on the opposition radio channel “Dozhd” (“Rain”), oppositionist journalist Bozhena Rynska lashed out at Trump’s wife Melania in a vicious verbal attack.

Russian opposition media’s attack of Melania Trump as a “trophy wife” was first set by Julia Ioffe, a Russian-born émigré, bilingual American journalist with strong personal ties to  many prominent leaders of Russian opposition. Ioffe viciously attacked Donald and Melania during the campaign, presenting Mrs. Trump as a trophy wife not worthy of being the First Lady. (The day after the elections, Ioffe flew to Buenos-Aires. “See you later, America. Maybe I’ll recognize you when I’m back” was all she wrote on Facebook.)

“From my perspective,” Rynska said during a live radio talk show, “Melania Trump does not look very appropriate in the role of the First Lady, because she is a typical trophy wife—a wife that is very expensive to maintain. She is not a woman-partner. Like a house that is very expensive to take care of—swimming pool needs cleaning, you need to pay the doorman, this and that, we are talking big money at the end of the day. She is like that: the wife that is very expensive to have. And she is your typical trophy wife—which [says something] about the immaturity of Trump, who has a habit of marrying ‘trophies’—despite the fact that among decent people it is widespread to marry interesting women, women with substance.”

Two days after the election results became known, Michael McFaul made it public that he had been denied a Russian visa for the first time in his life. Russian officials accused him of helping ruin U.S.-Russian bilateral ties.

“The only hope is the immune system of American democracy,” Evgeniya Albats, the “grandma” of Russian democracy and the editor-in-chief of oppositional The New Times, lamented on Twitter.

Maybe there is life after Clinton for Russian opposition after all—but they will never forgive Donald Trump for winning.