*NOTE: This review contains major spoilers for the film*

Canadian director Denis Villeneuve made one great film in 2013 called Prisoners. Provocative, enthralling and beautifully composed, it peeled away the layers of a complex mystery story with a surprise in every frame. I was an instant fan. This promising relationship has come to a heartbreaking finale with every film since. Enemy and Sicario were unspeakable disasters, and Arrival, the director’s latest exercise in pretentious poopery, gives me every reason to believe I have parted company with Denis Villeneuve for good.

TV anchormen on every channel pour out the news that 12 unidentified flying saucers have landed throughout the world, in places as far afield as Russia, Venezuela and Montana. Borders are closed (don’t tell Donald Trump), gas is in such limited supply that there’s no way to escape, and the president declares a state of emergency. Enter Amy Adams, as linguistics professor Dr. Louise Banks, and Jeremy Renner, as theoretical physicist Ian Donnelly, recruited by the U.S. military to find out what the aliens want, decipher their language through translation and ask them what their goals are. Never mind that Jodie Foster already solved the problem years ago, in Contact. Adams is more neurotic and short-fused, still grieving over the disappearance of her husband and the loss of her daughter from some inexplicable disease that may or may not have traveled from outer space. (I think it was cancer, but with this movie, cancer seems too logical, and who can tell?) Anyway, the spaceship she finds is an obelisk-shaped rock suspended above the ground, and the aliens inside it look like the grab-ass trees that threw apples at Judy Garland in Oz.

The extraterrestrial quantum leap that follows takes almost two hours to unravel, and then nothing happens that makes one bit of sense. Adapted by Eric Heisserer from a bizarre story by sci-fi poseur Ted Chiang, Arrival is a weird flick, slow and tedious, too metaphysical for Rod Serling’s The Twilight Zone and most likely to appeal to people who like to play video games and solve puzzles. One reviewer at last year’s Venice Film Festival, where this head scratcher was unveiled, praised the film for “details of linguistic research and mathematical probability equations instead of the smash and grab of space conflicts” in your typical sci-fi lunacies. Sorry, but I’m one of those folks who prefers a little smash and grab, myself.

Since nothing ever happens, Dr. Banks pronounces the aliens friendly and surmises that the news they want to share is about the future of the planet. Nobody believes her, so the alien ships finally withdraw. Language, they insist, is the only thing that links the species to the future of humanity. Unfortunately, the aliens don’t really do anything but squeal like babies with colic, and there’s nothing linear about their language, so there’s nothing linear about the movie, either. Result: There is no beginning, no middle and no end. This might be O.K. for a language, but a movie has to start and end somewhere. Also, she’s lost a child. But in the end, you realize the present is the future and the future is the past, or something. So the child Adams lost hasn’t been born yet, and Renner, the new astrophysicist she falls for on a tour of the space ship, is going to be the lover she lost years ago, ready to father the baby, who will be called Hannah because the name is a palindrome. If you got all that, write it on a postcard and mail it to somebody who cares. I couldn’t wait to call Arrival by the new name Departure. 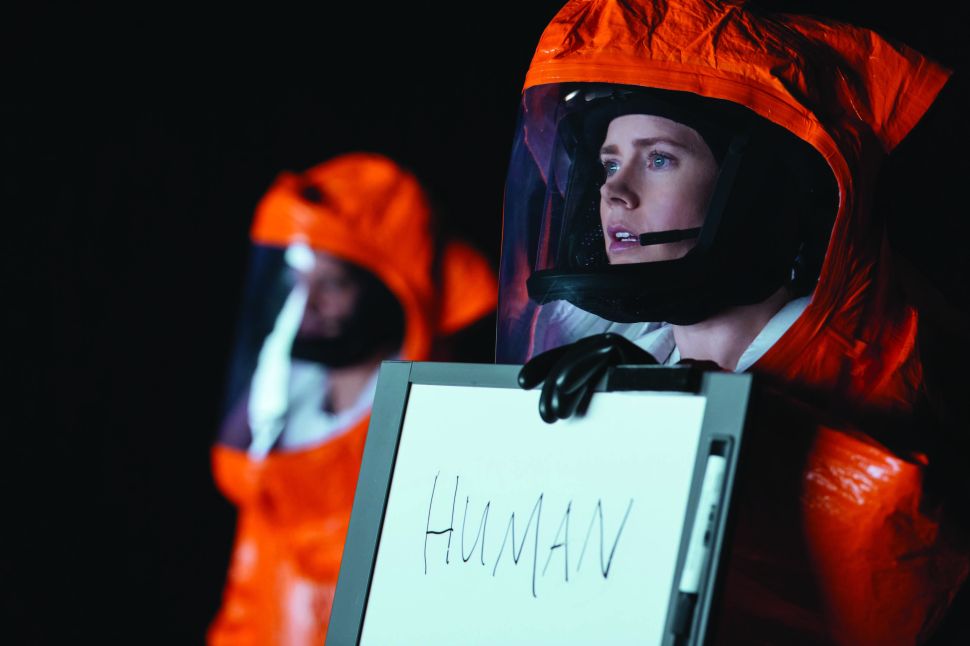