Farewell, Tobias Church, you big hulking sack of swagger, you.

That’s right, last night’s Arrow, titled “Human Target”, saw the end of Chad Coleman’s brass-knuckle-bearing drug-lord, dispatched (along with roughly a dozen police officers) by Prometheus. On the surface, Church’s death is unfortunate because he brought a certain grounded menace that’s been lacking in Arrow “big-bads” recently. For as far as we’ve come, Arrow will always be the street-level entry into DC’s comic book TV world, like Christopher Nolan’s Dark Knight trilogy with a quarter of the budget and 90 percent more shirtless pull-ups. An adversary like Church brought that idea back into sharp focus, a threat not so much concerned with mystical rehabilitating pools or complete nuclear holocaust but with setting up a nice, profitable area for himself in Star City one beating at a time.

Of course, even in death, Church left his mark, and not just on Rene Ramirez’s face (although, hot damn, he left plenty there, too). For one, through 20-odd hours worth of torture both physical and mental, he learned Oliver was the Green Arrow, that it’s the mayor of Star City out every night under a hood. Helpful information, if you’re a power-hungry mafioso, because it’s far easier to kill Oliver Queen when he’s wearing a suit and tie.

Enter one of the most stupidly brilliant characters that could only come from the pages of a comic book — Christopher Chance (played by an underutilized Wil Traval), the Human Target, who puts on an Oliver Queen Halloween mask and takes the bullets from Church’s hired gun. I can’t properly decide whether I love or hate the fact that it’s never actually explained why Chance is more qualified to get shot than Oliver, seeing as how he didn’t really do anything special. He just…got shot. That’s not even mentioning the age old question posited by one of our greatest modern scholars: “But what if he shot you in the face?”

Well, no. Not to Oliver, at least. For him, he has to wear an Oliver Queen mask everyday; it’s not made of rubber, no, but it fits just as uncomfortably. It’s not real, not fully. What’s real to Oliver is the Green Arrow, which makes the exchange between he and Church, their last exchange, particularly compelling: “You mind if I call you Oliver?” Church asks.

“Actually, I do,” the Green Arrow responds.

And then Church gets his ass roundhouse-kicked into the dirt, because he forgot who he was fighting. In that moment, he’s not firing potshots at Mayor Oliver Queen, he’s taking on, as that increasingly earnest episode-opening narration always tells us, “something more.”

As much as I wasn’t a fan of John Diggle’s rapid progression from the army to self-imposed imprisonment to back under the Spartan hood, I love the role he’s landed in on Team Arrow 2.0. He’s the been-there-done-that, seen-this-shit-before guru for this team of ambitious but sloppy heroes. Because what has Rene, Curtis, Rory OR Evelyn been through that Diggle hasn’t during his wars overseas and back home? Some tortures you can’t see. Not all nuclear blasts happen outside your head.

I particularly love the way director Laura Belsey (Who proved she can handle Arrow‘s more sentimental side in season 4’s “Canary Cry”), framed any conversation between Diggle and Rene; separated but claustrophobic (with the occasional Vertigo flourish). Because despite the years and distance between them, they’re basically on the same, winding path. “When it comes to guilt or recrimination the line forms behind me,” Diggle tells Rene. “I’m wearing this suit again because I think it’s a path to redemption. And it could be for you, too.”

And again, it comes back to masks. It comes down to people so heavily disappointed in their real selves (Diggle for murdering Andy, Rene for giving up Oliver’s name, Oliver for…everything), that to become their best selves they don a hood, be it green, bulky, or something you can buy at Sports Authority. 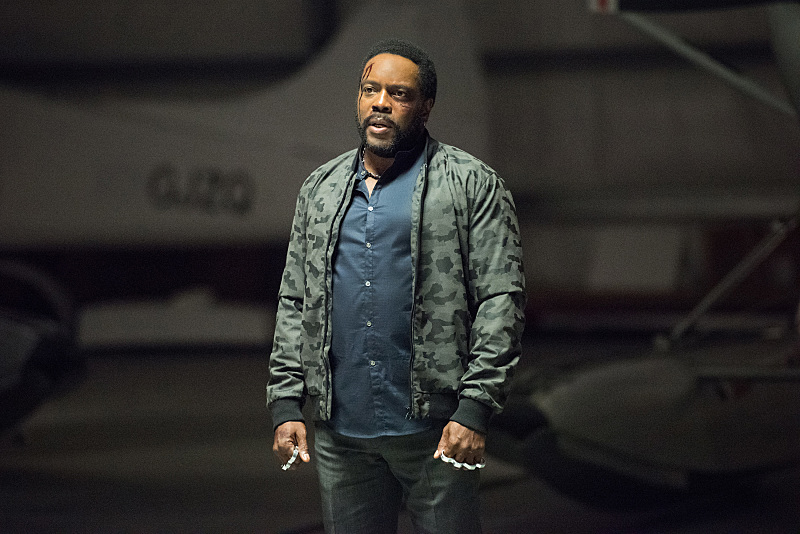