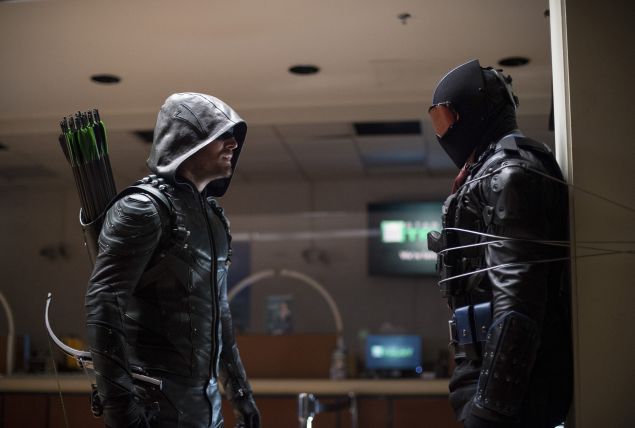 I always like to start these Arrow reviews with a bang, getting the most important, relevant plot-point out in front. So, with that said, this moment where Green Arrow enters the scene by dramatically hopping on to a three foot counter is probably the funniest TV image of 2016, and I can’t even really explain why:

Is it the running start? It might be the running start. Or is it the incredibly minimal effort it takes to get up there, or the height of the counter itself? I mean, Oliver’s only, like, a foot taller than Rory while he’s up there. Speaking of which, Rory turning in his spooky-ass Day of the Dead mask like, “da fuck?” as Oliver lightly jogs out of the darkness only adds to this delightful stew of comedy gold. Oh, man. And the Emmy for Outstanding Comedy goes to Stephen Amell, for briskly leaping roughly one-and-a-half feet into the air.

So, right, there’s the rest of the episode, titled “Vigilante,” an hour of Arrow that had some interesting things to say but wasn’t quite sure how to say them. The premise is simple: Prometheus is lying low after spending a week murdering people with throwing stars. However, there’s a new menace in town, an embarrassingly un-creative vigilante calling himself Vigilante, who buys his bullets from a high-caliber gun shop, his snowboard goggles from Zumiez, and who isn’t afraid to take the lives of the criminals he captures. Oliver decides its up to him and Team Arrow 2.0 to stop him, even if he’s technically doing the exact same thing they are.

“Who gets to decide who’s a psycho and who’s a vigilante?” Rory asks.

And that…is a fantastic question, actually. Oliver Queen, over Arrow‘s entire existence, has been driven by a combination of headstrong stubbornness and superhuman determination, with an outer layer absolutely coated with a lack of self-awareness. But this is bordering on self-parody. It’s hard to take Oliver seriously–or any of the team, really–in their mission to stop a vigilante from killing people when we’ve spent seven episodes watching Rene double-fist uzis and Oliver pepper random thugs with arrows. I see what Arrow is going for; we’re supposed to be watching Oliver struggle with trying the two sides of himself, Mayor and Arrow, and wrestle with the idea that darkness is just simply more effective than light. Vigilante represents an Oliver Queen turned to his most basic instincts; going solo, dispatching crime the quickest way possible.

The problem is that Green Arrow and Vigilante just aren’t dissimilar enough for there to be any contrast. Oliver uses the team’s reaction to the Kill List as justification for taking down Vigilante–“Last week, all of you were pissed when you found out that the Hood used to play judge, jury and executioner.” Which would be a good point, if the team also wasn’t constantly playing judge, jury, and executioner. Again, like I said, if you’re a villain but your name isn’t important enough to show up on Arrow‘s IMDB page Rene will, without hesitation, shoot you in the face.

All of this comes to a head when the team decides to fake a bank robbery to draw Vigilante out into the open. As always, it’s in these big set-pieces that ignoring Arrow‘s lack of internal logic becomes easy, because try as I might, I am but a human that enjoys cool exploding shit:

The faux-heist (which, as a sidebar, really highlights how truly terrible the Star City police force is at their jobs), ends with Vigilante holding a gun to Curtis’ head, and Oliver confronting him from atop a tiny countertop. “You’re not getting the job done because you’re not taking it seriously enough,” Vigilante says. “Maybe because you haven’t lost anyone.”

Which isn’t true; if anything, we know Oliver’s been through some shit, man. He’s lost people literally–his father, his mother, Laurel, the list goes on–but he’s also lost more than that. He’s lost any chance at a personal life. At love. Which is why his response, once Vigilante has been subdued, is probably the most interesting point “Vigilante” hast to make: “This is a war. And I’m going to fight it the right way. Because I’m all this city has.” It reads and sounds like an admission, that all the things I wrote, that Oliver has been saying he’s changed but not actually done anything differently, is something Oliver knows. But that, like the protection of Star City, is his and only his burden to bear.

As for the identity of Vigilante, well, it’s either pretty obviously Billy Malone, or the writers REALLY want us to think it’s Billy Malone to set up a twist. All I know for sure is it’s definitely not Quentin Lance, a Prometheus cliff-hanger from last week that was so unbelievable even Quentin was like “come on, that’s ridiculous.” You don’t get black-out drunk and effectively do martial arts across roof tops. Or so I’ve been told.

I also know for sure Vigilante isn’t Evelyn Sharp, but that doesn’t mean our Artemis isn’t up to no good. “Vigilante” ends with Evelyn meeting up with none other than Prometheus: “Don’t worry,” she says. “Nobody followed me. They don’t expect a thing.” It’s a nice twist, if only because it will force Arrow‘s creative team to remember to write lines for Evelyn more often than every 45 minutes or so. 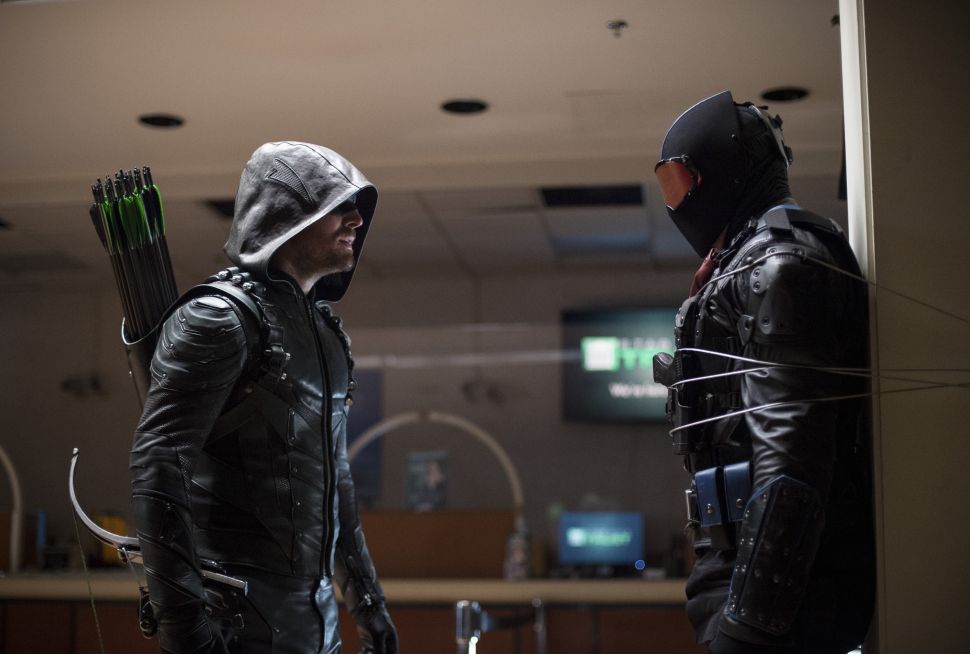