Mayor Bill de Blasio’s been campaigning for his former boss Hillary Clinton much of this year—but with the election in just seven days, he’s trying to bring everyone’s attention back to the work he’s doing at the city level, and perhaps to the upcoming 2017 mayoral race.

De Blasio—who has been traveling around the country to stump for the Democratic nominee, including in Iowa, Ohio and Michigan—reminded the audience that the presidential election is fast approaching, and that he’s addressed gatherings in different states, particularly at churches. But now he is bringing the discussion back to his administration’s achievements since he entered office three years ago, as the mayoral race is a little more than a year away, and potential challengers emerging.

Indeed, the mayor said there are now more than 4.3 million jobs in New York City—which currently has a population of 8.55 million people—and that more than 250,000 jobs have been created in the last two years. The city has particularly made strides in the areas of job growth and diversification of the economy, public safety and public schools, he said.

“Three areas where there has been sustained progress,” de Blasio said. “The question for us of course will be can we continue that progress constantly to be the city we need to be?”

He touted his Equity and Excellence for All initiative, which focuses on early childhood education, more professional development for teachers and the proliferation of reading specialists in schools. The mayor said 72,000 children were enrolled in full-day prekindergarten as of this morning and that the four-year graduation rate is more than 70 percent—a percentage he’d like to see go up to 80 percent within the next decade. He also aspired for the percentage of children on reading level by third grade, currently at 40 percent, to hit 100 percent over the next decade.

And he added that crime has continued to drop in the last three years, crediting former top cop Bill Bratton and Police Commissioner James O’Neill. He did not mention the broken windows policing method popularized by Bratton that focuses on quality-of-life crimes, which advocates say disproportionately targets minority communities.

“The fact is for the first time in 15 years, we’ve expanded the NYPD and those 2,000 new officers will be of course part of keeping us safe overall and particular of the fight to prevent acts of terror,” he said, referring to a police hiring spree he initially opposed. “But they will also be crucial to implementing a neighborhood policing strategy that bonds police and community a new way.”

The mayor also seemed to address the not-in-my-backyard mentality of residents that has posed challenges to the city’s plans to build affordable housing and combat homelessness as 60,000 New Yorkers currently live in the shelter system.

He recalled a town hall in East New York, the first neighborhood targeted under his rezoning plan, where he told attendees that development is unavoidable but the key is whether ground rules and a “public good in the process” come along with it.

“My message to them was I don’t negate or misunderstand the cynicism or the concern,” de Blasio said. “But I said to them, ‘Look at the neighborhoods around you where development has occurred without a framework or a set of ground rules.’ If you fear displacement, you can certainly see displacement in that model.”

The mayor’s appearance at the summit was not without conflict. Roughly 20 activists and public housing tenants protested outside over the New York City Housing Authority‘s NextGeneration plan, which calls for building new mixed-income developments on vacant space at public housing complexes. The demonstrators objected to what they perceived as the gentrification of NYCHA land.

“They’re not gonna move thousands of wealthy white people or wealthy any people into housing right next door to a housing project and everybody’s gonna live happily ever after,” said Lenora Fulani,  co-founder of the nonprofit All Stars Project.

A NYCHA spokeswoman said no part of the plan involves privatizing public housing or displacing residents and that the proposal is “a practical plan to preserve this housing for today and tomorrow’s residents.” 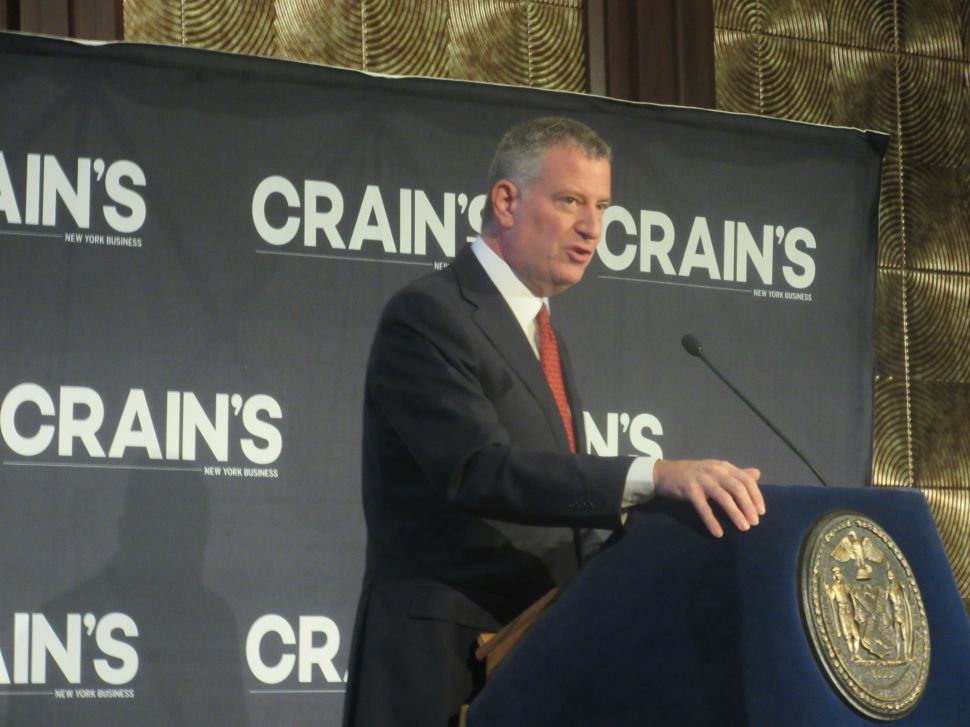