Beyoncé might be beloved by most of America, but some were less than pleased to have the Queen Bee grace their screens at the annual CMA Awards. When Lemonade was first released, Beyoncé listeners noted how genre-defying the entire album was, with some even declaring genre as dead. One standout was the raw, assumedly personal “Daddy Lessons,” which would be considered a true country hit if it was sung by, say, Miranda Lambert. Unfortunately, some viewers disagreed—or perhaps they just hadn’t listened to Lemonade in its entirety.

The “Daddy Lessons” music video famously featured a home video of her own father, Matthew Knowles, who’s also known for selling her merchandise and giving “terrible” talks on becoming a celebrity. The song itself touches on whiskey, Texas and the Second Amendment, so it’s a wonder country music fans weren’t immediately ready to embrace it as an anthem.

The responses ranged. Some people were bitter their favorite country artists weren’t asked to perform. Others wondered why she didn’t instead sing at the BET Awards. Some of Beyoncé’s fans were angry because they had to sit through the entire country music award show to see one performance. One CMT contributor wrote, “If you ask me, this song is no more country than her ‘Single Ladies (Put a Ring on It).'” She panned the track because it wasn’t written in Nashville.

Another issue might have been that the country community is slow to accept any kind of change. Kacey Musgraves was deemed controversial when she sang about same-sex marriage and smoking marijuana. Sam Hunt is a new country music singer who has been compared to Drake; while he’s been embraced by some, he’s not exactly considered classic.

The country music community has also been slow to forgive, never quite forgetting the Dixie Chicks controversial turn in 2003. That is, when Natalie Maines inadvertently turned activist when she told audience members in London “We’re on the good side with y’all.”  Perhaps now, in the acrimonious political climate, the Dixie Chicks’ comments may seem downright quaint.

If Taylor Swift can transform from country’s darling to a bonafide pop star, Beyoncé should be able to evolve as a performer, as well. And with help from the Dixie Chicks, she’s on her way to becoming more genre-bending than ever…even if those on Twitter disagree. 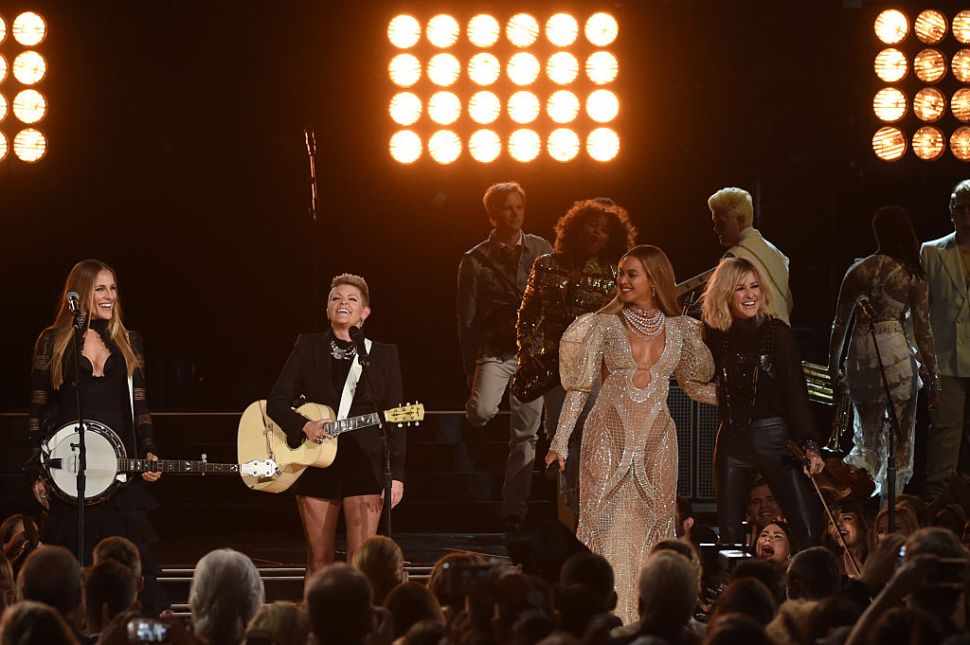