Artists love an audience. But when Michael Kiwanuka looks out at his, one aspect makes him sad. “Hardly any black people come to the shows,” said the star, who is of Ugandan descent. “If they do, it would be like 2 percent. How come it’s not mixed? How come only one type of person comes to certain types of gigs?”

It’s a deep question—one of many Kiwanuka deals with directly, or implicitly, on his revelatory new album, Love & Hate.

The collection, an out-of-the-gate No. 1 smash in the star’s native U.K., bores straight into issues of race in its first single, “Black Man In A White World.” Kiwanuka repeats the title phrase more than 40 times during the song’s four-minute expanse. But his tone isn’t confrontational or angry. It’s ruminative, suggesting someone earnestly grappling with the world as it is. The politicized nature of the song dovetails with a sharp rise in socially-attuned lyrics of late, evident on recent albums by Kendrick Lamar, Beyonce, Alicia Keys and A Tribe Called Quest.

“Black Man” isn’t just a statement on the power dynamics of race, but on Kiwanuka’s specific background. The singer’s parents emigrated from Uganda to the U.K. in the ‘70s, during the tyrannical reign of Idi Amin. In stark contrast to the U.K. of the Brexit era, the country at that time welcomed immigrants. Even so, Kiwanuka felt alienated.

“Growing up in North London, in a middle-class white area, we were the only real black African family there,” he said. “It was a good upbringing but we were different. At the same time, when I’d go to Uganda and hang out with my family, we were seen as English guys. They have a word which means foreigner, or white guy. That’s what they called us.”

The sense of living in between worlds extended to the type of music Kiwanuka grew up loving, as well as the type he came to play.

His 2012 debut, Home Again, defied stereotypes about the kind of music a major label will market for a black star. It stressed a cool brand of folk-soul, marked by spare and shadowy production that highlighted the singer’s husky cry. Instant comparisons rose to Bill Withers, as well as to Terry Callier, a lesser-known, African-American singer who performed a soulful brand of folk in the ‘60s and ‘70s. Kiwanuka’s debut became a Top 5 hit in the U.K., as well as in many European countries. It earned him enough Stateside respect to inspire Kanye West to ask him to collaborate in the studio during the Yeezus sessions. (Their brief connection never bore fruit).

The Withers allusion proved a double-edged sword for Kiwanuka. “I was a big fan,” he said. “The fact that he was a black guy playing emotional, folk-esque, soul songs was a big influence on me to keep doing the kind of music I was trying to do. At the same time, it’s too easy a comparison. It made me want to gain my own sound to the point where people just hear me and no one else.”

With a cinematic sweep, the music swirls together orchestrations, operatic female choirs and psychedelically-fuzzed guitars, all alluding to the Ennio Morricone soundtracks of the ‘60s and ‘70s. Kiwanuka connects that legacy to that of ‘70s progressive soul. To help him achieve the balance, he employed producer Brian “Dangermouse” Burton. The producer has often drawn on Morricone’s sound, most clearly on his 2010 album Broken Bells.

Burton’s collaboration with Kiwanuka began in early 2015 when the producer emailed the artist to see if he had any new projects going. Kiwanuka had gotten stuck on his earlier attempts at a follow-up to his Mercury Prize-nominated debut. With the years expanding since his first release, he leapt at the chance to jump-start things with the famed producer in L.A. They began toiling “just for fun,” Kiwanuka said. Soon their efforts yielded the track “Falling,” whose sound proved promising enough to suggest a kick-off point for the entire album. Burton encouraged a bold new sound, rich in mystery and yearning.

The first track announces the change right away. “Cold Little Heart” sprawls on for over 10 minutes and doesn’t introduce Kiwanuka’s pained vocal until nearly half way through. It’s almost a dare, challenging the listener to venture farther. “For some reason, I thought that going that far would gain more people’s interest,” the singer said. “Even if it raised eyebrows, or made people think it was weird, I thought it would make more people listen.”

His approach had a role model. Back on 1969, Isaac Hayes introduced his vocal deep into his version of Burt Bacharach’s “Walk On By,” found on his classic album Hot Buttered Soul. Hayes’ disc helped push R&B into the realm of “head music.” “Hot Buttered Soul and the Funkadelic stuff put the heavy, guitar-driven rock of the ‘60s into soul,” Kiwanuka said. “That wasn’t there during the Motown period. To me, that was so cool because I love rock ‘n’ roll guitar music and soul at the same time.”

To lend greater distinction to Kiwanuka’s timbre, Burton threw a haze around his voice, making it sound as if it floated in from another world. “That came from the old blues recordings like Howlin’ Wolf or Sun House,” the singer said. “Their mics would break up on those records. I love the feel of that.”

For a deeper historic reference, “Black Man” draws on what sound like the old prison songs, as captured by Alan Lomax’s field recordings. Turns out, it’s not a sample but the sound of Kiwanuka clapping along with his own vocal chant.

For the rock side, Kiwanuka drew from Pink Floyd—specifically the heady fidelity of the sound and the bluesy ping of his electric guitar. “David Gilmour is the most clear influence on me,” he said. “I’ve always loved his playing. Also, Eddie Hazel from Funkadelic, who had that Hendrix feel. Electric guitar playing is a huge area for me. There was more encouragement for me to follow through with it on this album.”

Dealing directly with race took a bit more fortitude. At first, Kiwanuka said he was self-conscious about releasing a song titled “Black Man In A White World.” “I didn’t want people to feel like I was angry or against white people,” he said.

But those who heard it responded positively right away. Before the album even came out, director Baz Luhrmann heard a copy and contacted Kiwanuka about including the song in The Get Down, his series about hip-hop culture in the burnt-out Bronx of the ‘70s.

“Baz described the plot to me and it blew my mind because I’m obsessed with the ’70s and with American music,” Kiwanuka said. “Also, I was a fan of Baz’s filmmaking. He asked, ‘Do you mind if we take a few liberties with the song? We’d like to have Nas on it.’ That blew my mind even more. They sent back scenes with the version of the song with Nas and I loved it.”

Many things in society have changed since the days depicted in The Get Down. Yet, some key issues of race remain the same. The cultural divides that have long inspired self-segregation between the races haven’t changed much. “We still like to stay with our own people,” the star said. “We don’t really mix.”

Accordingly, many black listeners still don’t feel comfortable attending shows by artists perceived to play music that appeals to whites, and vice versa. While Kiwanuka said he doesn’t mind that his audience is mainly white, he added, “it would be nice to see a spread.”

At the same time, he noted that new songs like “Black Man In A White World” are ultimately, “about being unique and standing out. The album is about breaking through to be myself, regardless of what’s happening in the outside world.”

Ironically, Kiwanuka believes his early sense of alienation helped teach him how to do that. “Ultimately, I don’t know if it’s a bad thing to be alienated,” he said. “People say it is, but it makes you who you are.” 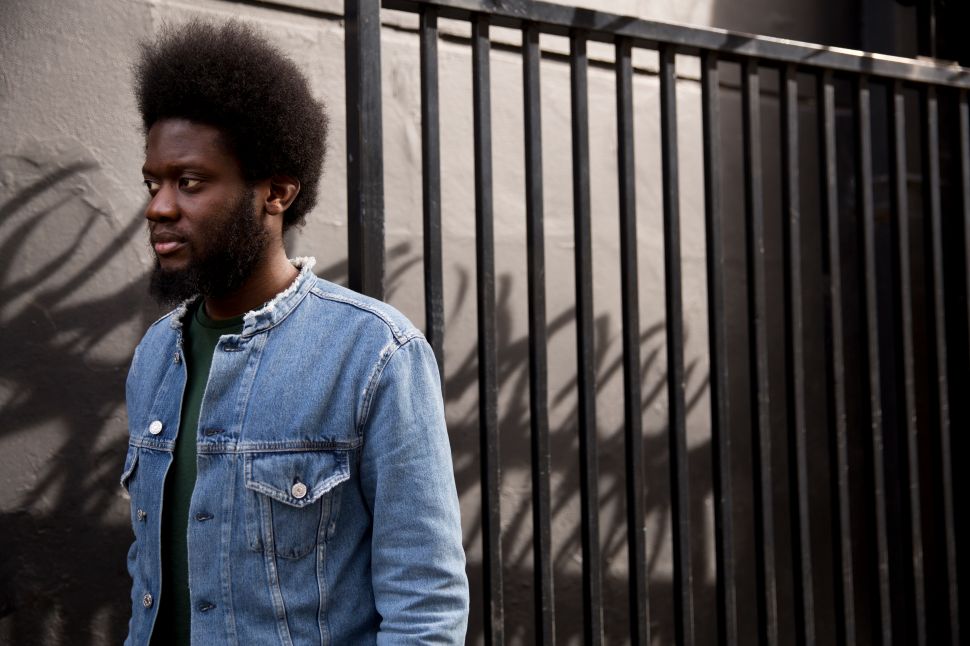