Mayor Bill de Blasio officially kicked off his campaign for reelection in 2017 with his first labor union endorsement today—just six days after the shock loss of his former boss Hillary Clinton’s defeat in her bid for the presidency.

The Uniformed Sanitationmen’s Association, which represents 14,000 active and retired city garbage handlers, announced its support for a second de Blasio term this afternoon. The roughly 200-strong crowd greeted the liberal Democrat with chants of “Four more years! Four more years!” at its Manhattan headquarters—the union’s president even gave him a Calvin Klein jacket following his speech so he can stay warm—and behind the podium where de Blasio spoke was a larger poster that said “USA Local 381 Endorses De Blasio For Mayor.”

De Blasio commended sanitation workers for their role in helping the city rebuild following Hurricane Sandy in 2012, as he battles the federal government over how effectively the city managed funds provided for the Build It Back program for homeowners and faces pressure from City Council members to speed up the rebuilding of homes.

“They didn’t know what to do. They were confused, they were hurt,” de Blasio said. “And what I heard all over this city—and I hope you heard this, too—people said, ‘You know who helped us get it back together? You know who was there for us? It was sanitation, it was sanitation,'” garnering raucous applause from the workers in attendance.

He also said the workers played a big role in helping the city to recover from the 2015 Snowstorm Jonas, noting that the projections changed from six to 10 inches of snow all the way up to 14 to 16 inches but the snowstorm ended up being the biggest blizzard in the city’s history.

The mayor also touted his accomplishments such as the more than 70,000 children enrolled in full-day pre-kindergarten, Police Commissioner James O’Neill’s neighborhood policing program and his push for more affordable housing, reminding the audience that the city needs to be inclusive of people of all socioeconomic statuses.

And he tried to reassure the audience that despite the “confusion” and vast number of “unanswered questions” the impending presidency of Donald Trump brings, it will have no effect on the way the city functions.

“One thing I can tell you about our city: we are who we are,” de Blasio said. “New York City is gonna stand strong whatever happens in Washington, D.C., whatever happens across the nation. New York City, we have our own values, our own way of doing things, and we’re proud of that.”

Harry Nespoli, president of the Uniformed Sanitationmen’s Association, praised de Blasio for reaching a pension and pay raise deal with the union last year that brought nearly 80 percent of the municipal workforce under contract, calling him a “union-friendly mayor.” The de Blasio administration had also reach an agreement in December 2014 with the rest of the sanitation workers represented by the Sanitation Officers Association and the Uniformed Sanitation Chiefs Association.

He also praised him fro securing three-quarter disability pay for sanitation workers hurt on the job, his rent freeze program and recognizing that their manpower was down to a mere 5500 jobs.

“He comes on, he’s got 99 unions, five years out of a contract, that the last administration just disregarded,” Nespoli said. “Within two years, he has over 90 percent of those contracts done. That’s what it’s all about. That’s managing, that’s government. Getting that done.” 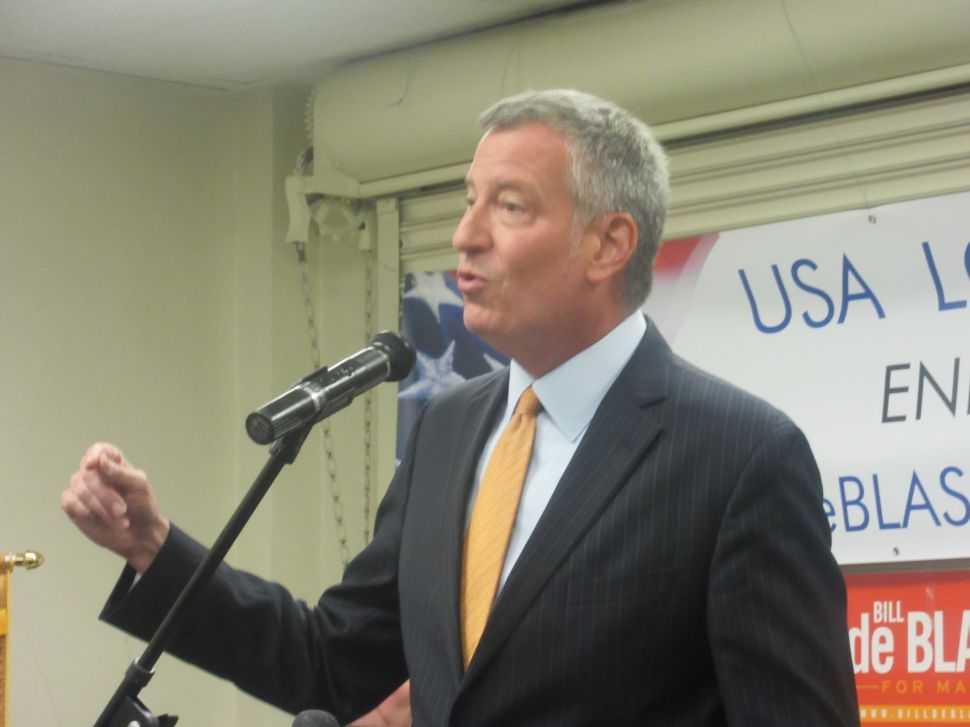