Bob Dylan became famous in the days when America was moved by a historic movement for civil rights, which Dylan actively supported, and America was led by President John Kennedy, who inspired the same young generation that was thrilled by the music, words and ideas of Dylan.

Bernie Sanders became famous at a time when Americans were trapped in a lost generation of politics, where citizens young and old were angered and alienated by a political system that produced few means of achieving their great aspirations for a better and nobler politics that is the heart of American democracy.

The awarding of the Nobel prize for literature to Bob Dylan was an inspired act of creative genius by the Nobel committee, to honor an artist whose lifetime body of work has led him to be called the voice of his generation, a phrase Dylan would never use to describe himself.

Dylan embodies the notions of artistic freedom, creative genius, and evolving culture that inspire our personal visions and dreams when we enjoy each new installment of his brilliant work. Every time Bob Dylan creates anew, his audiences and listeners think and grow and feel anew.  The works that come from his experience and ideas that take him to new realms of art become new influences on our thoughts and feelings that are incorporated into our perspectives and lives.

This is the essence of creative genius.  Words can move souls and sometimes move worlds. This is why the Nobel committee was so brilliant in his poetry the Nobel prize for literature.

The publication of the new Bernie Sanders book “Our Revolution: A future to Believe In” will occur on November 15, shortly after our elections and before the Nobel week of ceremonies in Stockholm, which Dylan is now likely to attend in early December.

The Sanders book will be required reading for all progressives and many who are not progressive. While Bernie is now ardently barnstorming the nation in support of Hillary Clinton and Democrats running for the House and Senate, his upcoming book has the potential to have a historic impact, as the Progressive Party platform that Teddy Roosevelt ran on in 1912 laid the foundation for the New Deal and the New Frontier.

Like Dylan in his poetry, Sanders in his book and speeches offers words that matter that can provoke thought and action from countless numbers of people.

When Dylan gives his Nobel lecture, his legions of fans and admirers around the world will listen with rapt attention to the words he speaks and the ideas he chooses to champion on this special occasion.

I would argue that Bob Dylan was indeed the closest thing to a voice for my generation, which came of age during the 1960’s battles for civil rights, which grew to include women’s rights and ultimately universal human rights, in a battle that continues today.

Even now, today, decades after Dylan and Sanders championed civil rights in the 1960’s, there are major efforts to suppress black voting by Republicans in states including North Carolina.

I would argue that Bernie Sanders is indeed the closest thing to a voice for the current generation that seeks leaders and visions that are the anti-thesis of the ethic of greed that caused the great financial crash and economic injustice of our times.

As I often wrote throughout the presidential campaign, when Sanders was matched against Trump in presidential polling, Sanders would almost always be ahead by landslide margins.

That is the stuff that voices of a generation are made of.

The decision to award Dylan the Nobel prize for literature was inspired because his poetry set to music was profoundly brilliant, moving and timeless.

There is one major difference between Dylan and Sanders. Bob Dylan, to his credit, was always evolving in his creativity and inspirations, incorporating new themes of faith, culture and politics into his work. Bernie Sanders, to his credit, is the same progressive idealist he has been throughout his life.

This dramatizes the difference between culture and art, which expand the boundaries of creative growth, and politics and government, which should bring a steadfast commitment to high principles that are pursued until they are translated by actions into results.

While I honor Dylan as a voice of my generation, others will honor him from different perspectives based on their life experiences being affected by his creative genius expressing various phases of his cultural influences and timeless art.  That is what makes his creative genius so brilliant and his work so lasting.

One thing that links Dylan and Sanders is the identification with protest.  Dylan in the 1960’s was a voice of protest against injustice and wrongs. His invocation of chimes of freedom and times that are changing ring true today, though they are aligned against forces of self-interest and backlash, while Sanders today champions a revolution that would restore democracy to individuals who matter, which is aligned against self-interested forces that profit from the status quo that Sanders wants changed.

Dylan puts his evolving art on the table with every new piece of work. He spends little time discussing himself, letting his art speak for itself, inspiring those who appreciate his work to react in their own individual personal ways.

When Sanders puts his new book about our revolution on the table with its publication on November 15, he hopes (and I hope) that his words and plans become a source for coordinated action by large numbers of people who want the changes he seeks and the better world he promises if they are enacted.

The ideas of Bernie Sanders, like the ideas of the progressive party that Theodore Roosevelt championed when he ran for president in 1912, will be a guidepost that has already begun to shape and define the present and will provide the pathway to the next New Deal and New Frontier in the future.

While Bernie travels across the nation on behalf of Hillary Clinton and other Democrats, because he knows that Clinton and he agree on many things and believes that Donald Trump would be a disaster for the nation, once the voting ends and his book is published he will pursue his agenda for change regardless of who is elected.

When Dylan enjoys his Nobel moment of honor in December, there should be a revival of the spirit of protest that first brought him to fame, and when Sanders publishes his book in November he will help incite the next spirit of protest leading to the next movement for action for the changes that are widely supported, but rarely achieved, without a challenging battle against mighty forces.

In very different ways Dylan and Sanders are both forever young, which is a blessing to us all. 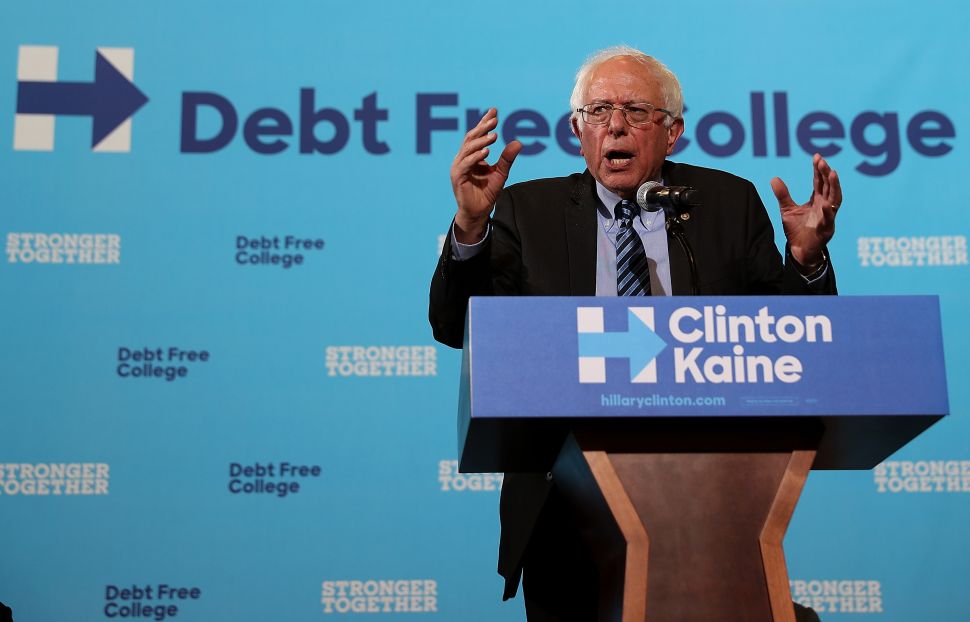