Ever since Nigel Farage, the father of Brexit, turned up at Trump Tower on Saturday, London has been in a spin. The establishment, including Theresa May’s Conservative government, is split between those who see the relationship with Trump as an asset to the UK, and those who just see Farage as a toxic, self-serving populist.

At Wednesday’s Prime Minister’s Question Time there was a question about Farage being put into the House of Lords, but May dodged it. It is well known there are members of the British cabinet who have argued for a closer relationship with Farage, because he has Trump’s ear. They are said to include Boris Johnson, Liam Fox and David Davis, the three men in charge of forging a new place in the world for a post-Brexit Britain.

Prime Minister May had previously slapped them down, saying she didn’t want “three people in the relationship.” But how long can she deny the reality of the situation?

All this just proves elements of the old elite have failed to catch up with a new reality. Almost everyone sees Trump’s win as a larger scale example of what the Brits did in the Brexit referendum, so engaging with Farage and Trump is the will of the people, like it or not.

Even if it wasn’t the will of the people, London should think of the realpolitik here. May was the ninth world leader to be called by Trump after his election, whereas Farage was the first foreign politician to see him. It is clear who the president-elect wants to talk to.

Farage was joined at Trump Towers by a group who call themselves “The Brex Pistols,” including Raheem Kassam—who set up Breitbart London with newly-appointed White House Chief Strategist Steve Bannon. The first time Bannon sat down with Farage, it was organized by Kassam and involved the American taking a five hour round-trip ride in a taxi from London to Cambridge (Farage was speaking at the Cambridge Union that night).

What other Brit, in the next four years, is going to have such sway in Washington? Who else would get the coverage Farage does on TV news? Who else would get Bannon to travel across an ocean to see? Who else needs no introduction at the White House? Who else can stop the traffic in the very fly-over states that Trump needs for his re-election?

The answer to all of these questions is of-course, Nigel Farage. And that is why Theresa May should swallow her pride and make him British Ambassador to Washington.

Who cares about having him in the House of Lords? I admit he would be good in Parliament, but there are already 750 peers. His real strength must surely be in developing the special relationship between the UK and the US.

President Obama campaigned for Britain to remain in the EU. The reason for that was simple: he loved Europe, and wanted a powerful ally in Brussels. President Trump hates the EU, and wants a powerful ally who agrees Brussels is a disaster for the western world.

Britain can be that ally, but only if the establishment accepts that the world has changed, and acts accordingly. Political appointments in the UK diplomatic service are rare, but they are not unheard of. So May could make this appointment if she wanted to.

And if she did, the new White House would jump for joy and give Britain the biggest say in Western policy since World War II. Now tell me Farage is more trouble than he’s worth. 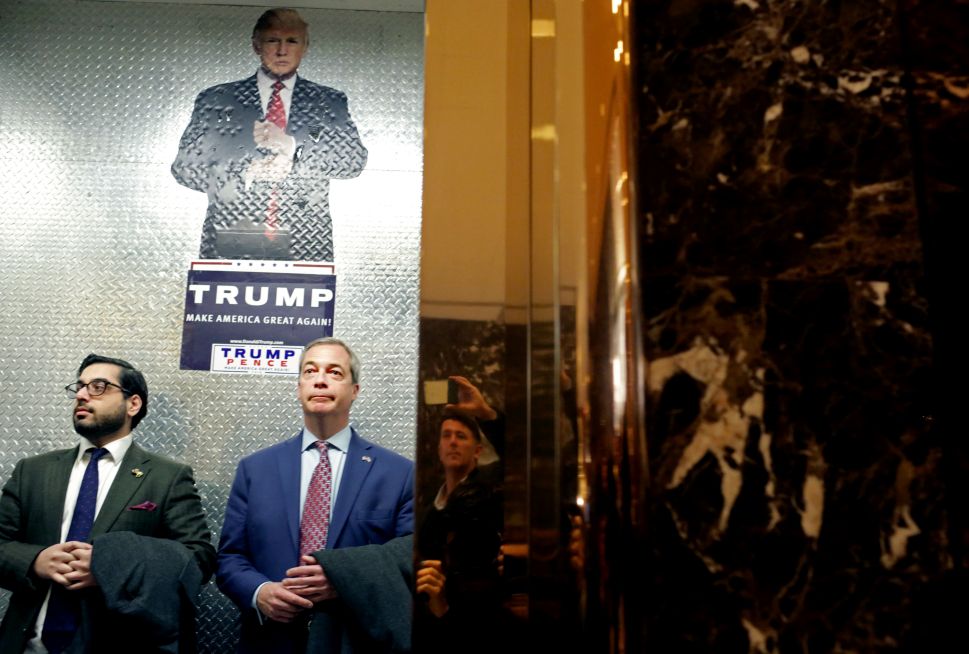