Brooklyn Borough President Eric Adams—who has never hidden his designs on Gracie Mansion—formally endorsed Mayor Bill de Blasio in Brooklyn for re-election next year because “he gets it.”

“Nothing is better than having a leader of a city that is as diverse as New York, particularly Brooklyn, 47 percent of Brooklynites speak a language other than English at home,” Adams said, praising the mayor for repeatedly pushing back on President-elect Donald Trump. “He gets it. He gets it that we may or may not be living in Trump Tower but our houses are our towers.”

The borough president fended off criticisms that the mayor hasn’t moved fast enough in resolving key issues, saying that “our children are getting smarter and our streets are safer.”

“Now more than ever, we need a mayor that’s willing to out-trump Trump, a Mayor that’s willing to stand up and fight for the values and principles of this city and this country,” Adams said. “A person who’s not only tall in stature but a giant among those little midgets that are going to hold the city back.”

And Adams, a former NYPD captain, defended the mayor amid his bitter clashes with police unions and former NYPD commissioner Raymond Kelly over the administration’s handling of crime and of Black Lives Matter protests that flooded the streets in the aftermath of a cop’s 2014 killing of Staten Islander Eric Garner.

Today, Adams said that as an ex-police officer, he can tell when people “fake the funk.” He criticized Hillary Clinton for not coming to the church during the presidential campaign

“All roads to leadership go through Salem and Hillary should’ve gotten the memo,” he said. “She should’ve understood that it’s the Salems of this city and country where the hopes and dreams of people are. This mayor gets it.”

A recent Quinnipiac University survey found that nearly half of New Yorkers believe de Blasio doesn’t deserve reelection next fall found, but that in an improbable five-way primary, de Blasio would pull 34 percent of the Democratic vote and that Adams would draw 21 percent. Of those polled, 74 percent indicated that they “haven’t heard enough” about Adams.

Adams is a longtime rival to Congressman Hakeem Jeffries, an outspoken de Blasio critic who recently said he has not ruled out a run for mayor. The two African-American pols share the same base of voters in Central Brooklyn, particularly in their native neighborhood of Crown Heights.

De Blasio used the occasion to reiterate his efforts to relieve New Yorkers’ fears about what could occur under a Trump presidency.

He said he looked Trump “in the eye” during their meeting at Trump Tower this week and told him that the city has become safer since drastically reducing the use of stop-and-frisk policing, a tactic the Republican president-elect has praised. And he said the immigrant experience “made America great”—a jab at Trump’s “Make America Great Again” campaign slogan.

“Anyone who wants to revise history and airbrush out the immigrants is going to find very little left in America and we need to have that conversation,” he said. “We need to take action because one election does not change who we are. It does not.”

Later this afternoon, former Mayor David Dinkins—the city’s first and only black mayor—endorsed the mayor at the Convent Avenue Baptist Church in Harlem. The two share a long history, as de Blasio volunteered for his 1989 mayoral campaign and worked for him as a City Hall staffer, which is how he met his future wife Chirlane McCray, then a Dinkins speechwriter.

At a ceremony where he renamed the Manhattan Municipal Building for Dinkins last year, he said that history does not acknowledge Dinkins’ accomplishments.

McCray said today Adams attended the launch of her ThriveNYC initiative to combat the city’s mental health crisis, had pushed hard for the mayor’s Pre-K for All initiative and that he is in a unique position to improve police-community relations.

“Eric shares the values that strengthen our communities and we’re so proud to have him stand with us today,” she said. 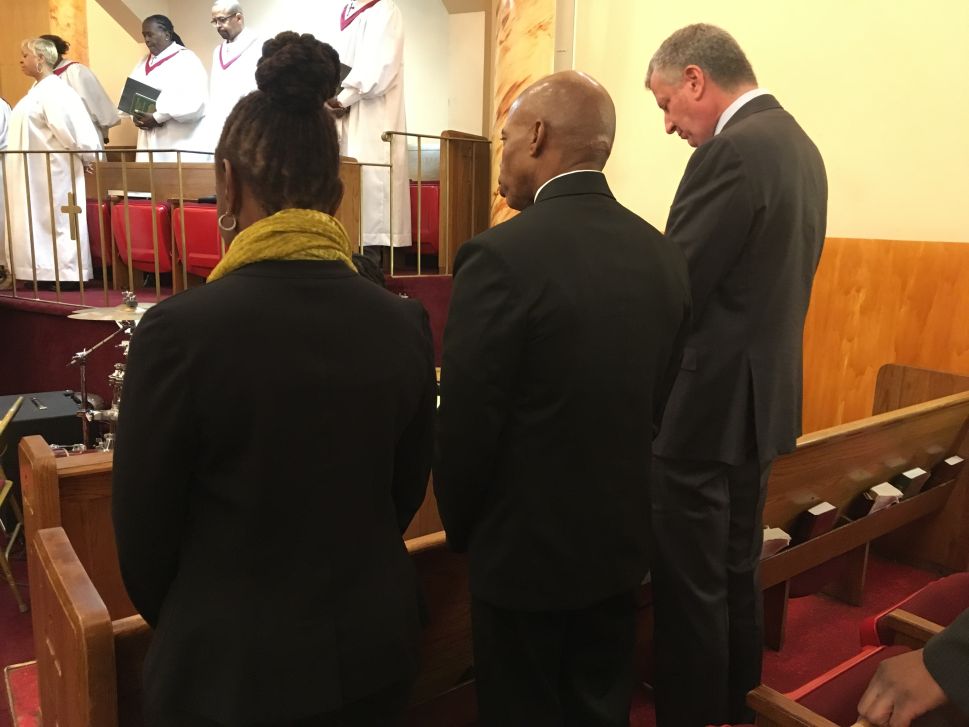