Jeffries sounded strangely like Vermont Sen. Bernie Sanders, the man he labeled a “gun-loving socialist” during the Democratic primary, when he claimed in an interview on WNYC today that Clinton failed to relate to white working class voters’ anxieties. Ryan represents deindustrialized cities like Youngstown and Akron, where Clinton underperformed President Barack Obama, and he has launched a longshot bid to replace the San Francisco-based Pelosi with the argument the party has lost touch with middle American concerns.

“There was a lack of a clear and decisive economic message coming from the top of the ticket. I don’t think we can blame Leader Pelosi for that,” Jeffries said. “At the top of the ticket, the theme, the headline, was ‘Stronger Together.’ And that was not a message that necessarily resonated with people who feel like they’ve been left behind by this economy.”

The Brooklyn pol, an African-American known for his advocacy on criminal justice issues, claimed a renewed emphasis on financial pains could sway voters across regions and demographics. But he asserted Pelosi had helped push that message, by opposing the massive Trans Pacific Partnership trade deal that the Obama administration negotiated and that many Republicans supported.

Jeffries was one of many Democrats who voted against granting the president so-called “fast track authority,” which would allow Congress only to vote up or down on the pact, and not amend any of its details.

“We’ve got to deal with the dynamic of wage stagnation and people struggling to reach the American dream all across America: that’s in the heartland, that’s in the Rust Belt, that’s in rural America, and certainly that’s in inner-city America,” he said. “Led by Nancy Pelosi we stood against the Trans Pacific Partnership. We voted not to provide President Obama with fast track authority to negotiate the deal. It was Congressional Republicans who carried that .”

Clinton also opposed the accord as a candidate, though she helped coordinate it as secretary of state. Sanders made condemnation of the deal one of the key planks of his campaign—as did Donald Trump, who has a long history of outsourcing manufacturing of his branded items to foreign shores.

Part of Clinton’s problems reaching blue collar Caucasians, according to Jeffries, was the lack of a slogan as clear and compelling as Trump’s “Make America Great Again.” He asserted that the Democratic nominee’s branding failed to make her formidable “policy chops” poignant to people who have seen their wages stagnate and their pensions disintegrate over the past few decades.

“Headlines tend to have more power to persuade than fine print. And Democrats do tend to speak in fine print policy details. And we’ve got to learn to anchor our message in broader themes that touch the hearts and minds of the American people who are struggling,” the congressman said. “We have to do a much more significant job in convincing those individuals that we’re the party of the working man and woman.”

Still, Jeffries called on his colleagues to take an adamant stance against Trump and his controversial staffing decisions, including the selection of Breitbart News head Stephen Bannon for chief strategist and Alabama Sen. Jeff Sessions as U.S. Attorney General. The lawmaker claimed Trump’s inflammatory rhetoric toward Muslims and undocumented immigrants has galvanized racists across the country.

“He has sent a message of empowerment to individuals, white supremacist groups, and others throughout the country,” Jeffries asserted. “Donald Trump owes it, not just to Republicans or Democrats, he owes it to the entire country to step forward and say continuously, in a clear-throated fashion, this will not be tolerated in the United States of America.”

But he said Democrats should be somewhat receptive to the possibility of “common ground”—if the benefit to the country is “clear, decisive and irrefutable.”

“Anything short of that should be met with fierce opposition and resistance, in my view, from House Democrats, because we have the better ideas,” he said. “So we should not down those ideas to accommodate a president who lost the popular vote and is ushering a new era of hatred.”

House Democrats will vote on whether to keep Pelosi in place tomorrow. Jeffries praised the 13-year conference leader for being “incredibly open-minded” in recent discussions about allowing younger members such as himself wield more influence, despite their lack of seniority.

The congressman indicated this opportunity has left him disinclined to challenge Mayor Bill de Blasio in next year’s Democratic primary, a possibility that has stoked much speculation among observers.

“It’s not something that I’m thinking about,” Jeffries told host Brian Lehrer this morning. 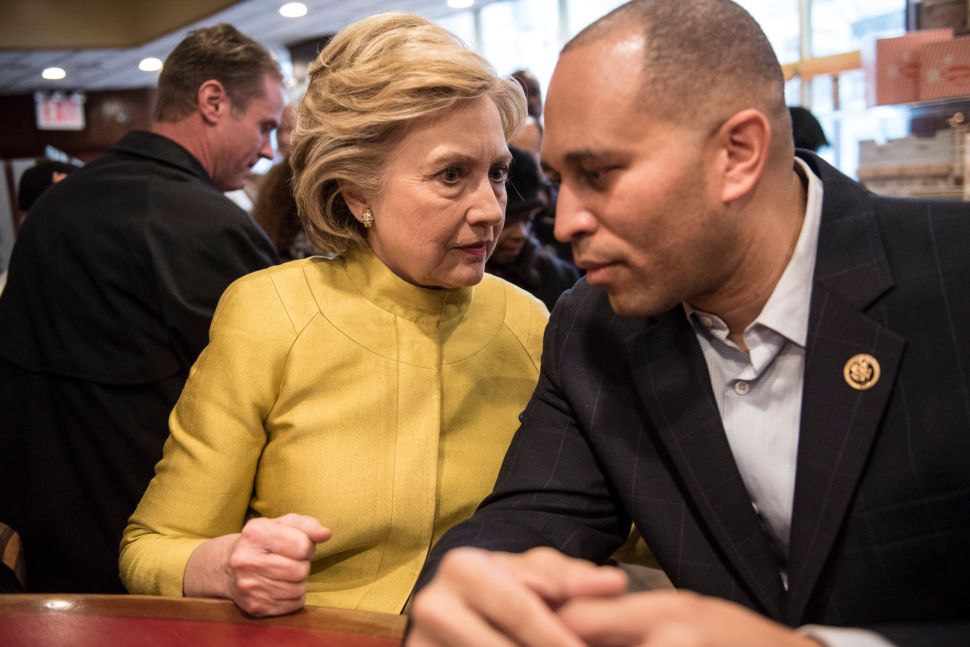