Brandon Webb was not about to break.

“Fuck you, Instructor Buchanan — fuck you. The only way you’re getting me out of here is in a body bag.”

It was the middle of “Hell Week,” a full week of physical and mental torture that all trainees must endure in order to become a member of the Navy SEALs — the most elite special forces unit on the planet.

Webb had come in with far worse physical conditioning than everyone else. And he had a bit of an ego. Not a good sign. The instructors wanted him gone.

Despite the odds (only 1 in 7 of trainees make it through) and the “special” treatment from instructors, Webb went on to become an accomplished Navy SEAL sniper.

Why did Webb succeed where so many others fail?

I have a fascination with warriors of all kinds, from the Spartans up through the Navy SEALs. When I admire a certain quality (mental toughness, in this case), I want to go straight to the source. I ask, “Who is the best in the world at X?” And then I try to study them.

It’s the same for the SEALs. They are some of the toughest human beings on the planet. And they have something to teach us.

What Makes a Navy SEAL?

I, like most people probably do, assumed that physical toughness was the secret to becoming a Navy SEAL.

In his NYT bestselling memoir The Red Circle: My Life in the Navy SEAL Sniper Corps and How I Trained America’s Deadliest Marksmen, Webb writes —

There is a common [misconception] that to make it through SEAL training you have to be a super athlete. Not so. In its purely physical requirements, the course is designed for the average athletic male to be able to make it through.

Oh. There goes that hypothesis.

If it’s not physicality, what is the deciding factor in SEAL success? Is it just luck of the draw? Better genetics?

What SEAL training really tests is your mental mettle. It is designed to push you mentally to the brink, over and over again, until you are hardened and able to take on any task with confidence, regardless of the odds — or until you break.

Aha. We have something here.

The secret lies not in the body, but in the mind.

Ok, so Navy SEALs are tough. Maybe the toughest in the world.

But why should we care? What do civilians, desk-workers, and noncombatants have to gain from more mental resilience?

With such examples as the now-famous Stanford marshmallow experiment and the concept of Grit introduced by Angela Duckworth in her bestseller of the same name, we have a good idea of how important grit (mental toughness) is for driving (and predicting) long-term success.

Turns out, the ability to stick it out when the going gets hard matters a lot. Winston Churchill famously advised, “If you are going through hell, keep going.” That’s some damn good advice.

In the soft-boiled world of today with heated toilet seats, A/C set to “freeze your ass off” and more food than we stuff our faces with, it’s no surprise that people fail at the slightest tinge of suffering.

But who cares about that.

What’s interesting to me is that, in a world full of softies, cultivating mental resilience provides an incredible advantage. By building the ability to stick it out as those around us give way, we are setting ourselves up for success.

After reading my way through a handful of memoirs from assorted ex-SEALs, I’ve distilled the tips and techniques they use down to the following 6 techniques.

Each technique comes with a short explanation and a practical application to real life.

How do you eat an elephant?

One bite at a time.

Faced with a daunting task — a marathon, a pretty girl on the street, or a startup launch — we often feel the fear, freeze and stop before we have begun.

The SEALs present a solution in segmentation. Slowly divide the elephant into neatly digestible parts and… Well, you get the idea. Take your challenge one tiny step at a time. It’s cliche, but it works.

You’ll see many ultra-marathoners and triathletes doing this. They focus on the next immediate objective — the next point in the horizon — and prevent their minds from passing to the entire race.

Application: Break down any daunting ask into immediate, bite-sized objectives. Ideally, they should fit into a 24-hour window. Focus only on completing one at a time. Avoid considering the whole.

This one startled me.

In a certain study, basketball players improved their free throw accuracy by 23% from just visualizing the free throws. Players who practiced actual free throws only improved by 24%. That’s a mere 1% difference. Wow.

Good visualizations have the following qualities:

Application: The next time you have a big, stressful event coming up, use visualizations to imagine yourself succeeding.

In times of great stress, a rush of our body’s main stress hormones — adrenaline, cortisol, and norepinephrine — can give us a boost of energy and focus.

However, when these hormones stay elevated for long periods, we cannot switch to relaxation mode. We have trouble sleeping, motivation tumbles and immune function takes a serious hit.

The SEALs simple solution is something called the 4 by 4 for 4:

Look familiar? This is the same kind of thing yogis have been doing for thousands of years. Our brain affects our body, and the reverse is true as well.

Use simple breathing exercises to switch off your stress hormones and prep the body for relaxation.

Application: This helps if you do meditation already, but the next time you catch yourself feeling stressed, stop and take several deep breaths. Bestselling author Tim Ferriss recommends stopping everything and taking a simple 3 breaths before going on with your day.

“Men are disturbed not by things, but the view they take of them.” — Epictetus

We have more control than we think.

We can’t control what happens in our outside world, but we can control our interpretation of it.

In his book, Breaking BUD/S: How Regular Guys Can Become Navy SEALs, D.H. Xavier recalls his own “Hell Week” experience —

“They were kicking me while I was way, way down. My belief could have been that they truly didn’t want me there; the consequence of that belief would have been me quitting. Instead, my belief was that I didn’t care what they said. I believed I was capable of succeeding…”

Xavier implements something I call reframing. He takes one possible belief or worldview, discards it, and selects another one. What could have been interpreted as a negative event suddenly becomes a positive one.

Application: Take an active look at how you are interpreting external events. Once you recognize it, challenge that view. Try to reframe any negative views into more positive ones. See “bad” events as a challenge for you to go out there and improve yourself.

Every day, I write three things in my journal that I am grateful for.

Give it a shot if you haven’t tried this. It matters a lot more than you might think.

Technique #6: Find Your Tribe (and Necessity)

In his book, Tribe: On Homecoming and Belonging, Sebastian Junger writes:

“Humans don’t mind hardship, in fact they thrive on it; what they mind is not feeling necessary. Modern society has perfected the art of making people not feel necessary. It’s time for that to end.”

Junger is onto something here. We’ve all seen the tales of immense human performance in times of great need. It’s the classic “mind over body” of a mother lifting up a car to rescue her child.

We humans are social creatures. And we crave meaning in a world that sometimes seems all too meaningless.

Find both — close friends and close principles — and you have a hotbed for mental resilience.

Application: Spend some time thinking about what brings meaning to your life. That’s the first step to finding your tribe — your group of people that share similar vision and values.

That’s it. Six simple techniques. You’ve got the tools. All that’s left is to apply.

Want more mental toughness techniques? Charles publishes The Open Circle, a free weekly newsletter to 3000+ readers where he deconstructs high-achievers (like the Navy SEALs) and shares exclusive lessons from his own crazy experiments. Join here. 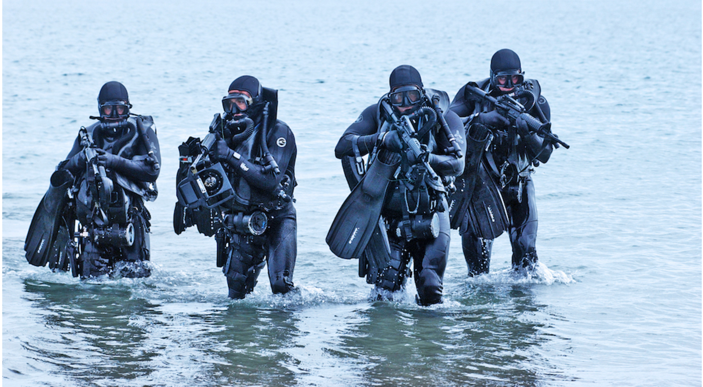