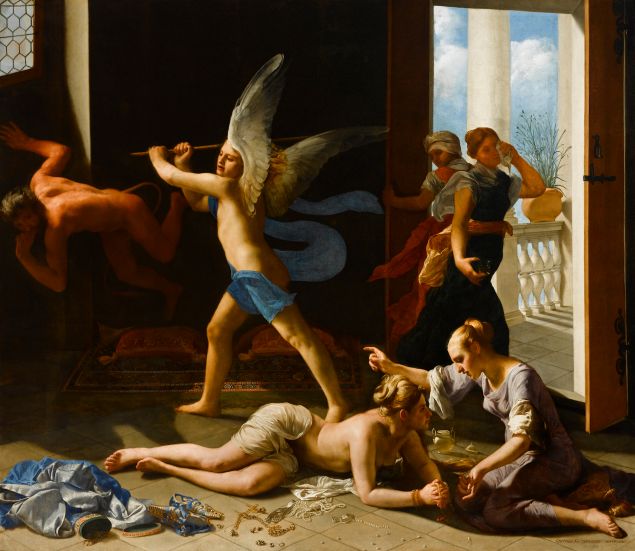 The Repentant Magdalene is a sensuous scene of religious conversion. Toward the bottom of its grand frame is a trail of gold jewels and dazzling clothing, leading to a fresh-faced young woman on the ground, barely draped in fine fabric, and comforted (and scolded) by a fully-clothed female figure. Above them, an angel in the center of the canvas drives a devil away.

The picture’s title explains what’s going on. It’s the scene of the repentance of the courtesan who is usually depicted keeping vigil at the tomb of Jesus with a jar of ointment that she placed on his feet.

Here we are at the point in the courtesan’s legend where she rejects a life of sin. Her sister, fully-garbed Martha, is there to guide her onto the path of virtue.

The painting is by Guido Cagnacci (1601-63). Cagnacci, until World War II, was viewed as a regional painter in a century of great artists like Caravaggio and Correggio.

Now at least one authority is calling Cagnacci’s The Repentant Magdalene the greatest Italian painting of the 17th century. The Metropolitan Museum of Art just exhibited its newly-acquired The Death of Cleopatra(1645), one of a number of Cagnacci’s  seductive visions of the suicide (martyrdom?) of the Egyptian queen. Next week, the Italian Cultural Institute is bringing Dying Cleopatra (1660-63) by Cagnacci to New York—this one from the Pinacoteca di Brera in Milan.

The Repentant Magdalene is on loan from the Norton Simon Museum in Pasadena, Calif. When Simon, a mergers and acquisitions magnate, bought the picture in 1982, and exhibited it in his museum outside Los Angeles, specialists noticed, but few others did.

But why now?  No one is alleging any kind of Cagnacci conspiracy. It’s mostly coincidence. The Met found the Cagnacci that it wanted and bought it earlier this year. The Italian Cultural Institute organizes a single-painting show every year. The loan from Italy has been in the works for a while.

What isn’t coincidence is the growing appreciation for the painter who was celebrated in his native Rimini (also the birthplace of Federico Fellini), but barely anywhere else. His pictures tend to be a harmonious and sometimes jolting blend of devotion and seduction, with a unique feel for tones of skin and expressions of ecstasy. The fact that the figure expressing ecstasy wore a nun’s habit did not deter him. Cagnacci’s life, reconstructed from patches of evidence, was, as one Italian art historian put it, “restless and dissolute, unruly and even disjointed.”

Now that Cagnacci is on the wall, it’s worth knowing who he was. A new entertaining source is The Art of Guido Cagnacci, by the Frick’s curator, Xavier Solomon.

Born in Santarcangelo di Romagna, near Rimini (the birthplace of Federico Fellini), Gudio Cagnacci was the son of a town crier and furrier. His family had enough money and the young man had enough talent for him to study in Bologna, and later to spend two years in the studio of the Roman master Guercino. A dutiful pupil—we don’t know much more about his early 20’s—Cagnacci found the time for adventure when he got back to Rimini. He became involved with Teodora Stivivi, a young widow from a prominent family who gained control of her older husband’s fortune at an early age and eloped with Cagnacci. The couple fled with her daughter and servant. Teodora dressed in red, as a boy. Interfering with lines of nobility and inherited wealth put Cagnacci at risk, and his father gave away his son’s hiding place. This betrayal may have saved the young man’s life.

Later Cagnacci would find another female companion to sign over her wealth to him. He would leave Rimini (we’re not sure why) and live in Venice under an assumed name, eventually moving to Vienna to work under the patronage of Emperor Leopold I. He painted The Repentant Magdalene in Vienna between 1660 and 1663, and died there in 1663. His father had already disinherited him. The only letters we have from Cagnacci are obscene tirades against other painters.

No surprise, then, that this artist could turn modesty into seduction, even though his customers tended to be churches or religious orders. In an altarpiece for a church in Rimini, he depicts the newly canonized St. Theresa of Avila pierced by an arrow held by an angel. The Carmelite nun’s face is a vision of serene rapture.

In the Met’s Cleopatra, the Egyptian queen, with a poisonous snake in her hand, pulls down her shirt with her other hand to expose her breast. It’s an exaltation of the flesh that is about to die.

Dying Cleopatra from Milan, soon to be shown at the Italian Cultural Institute on Park Avenue, presents a post-mortem as pure serenity. You have to look hard to find the snake that ended her life. 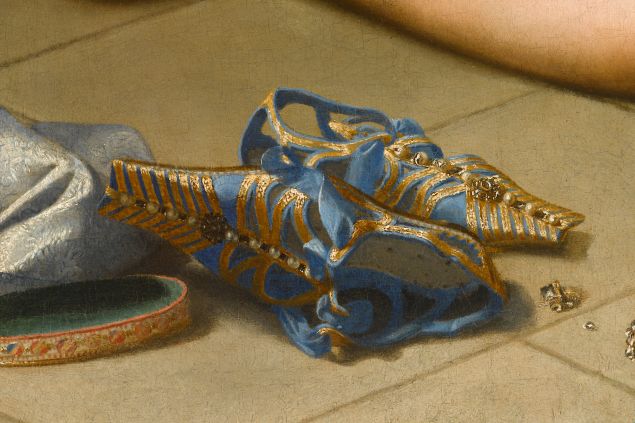 In The Repentant Magdalene at the Frick, Mary Magdalene has cast off the finery of her former calling. Along with the jewels (that led, later, to comparisons with Vermeer) there’s an exquisite pair of blue shoes in the foreground. Her rejection of a prostitute’s trappings was viewed by the church as the acceptance of piety. Viewers in the imperial court in Vienna may have had other thoughts. The Magdalene’s bemused expression is so modernly rendered that the adjective clueless comes to mind.  (Cagnacci also painted scenes of the Magdalene being carried to heaven by an angel, covered discreetly by her long tresses.)

It was a long journey from Fellini’s hometown to Hollywood. The painting had remained in Pasadena until the loan to the Frick. When it returns early next year, Cagnacci’s esteem and notoriety could be enough to merit a screenplay. Hollywood loves devotion almost as much as it loves seduction. 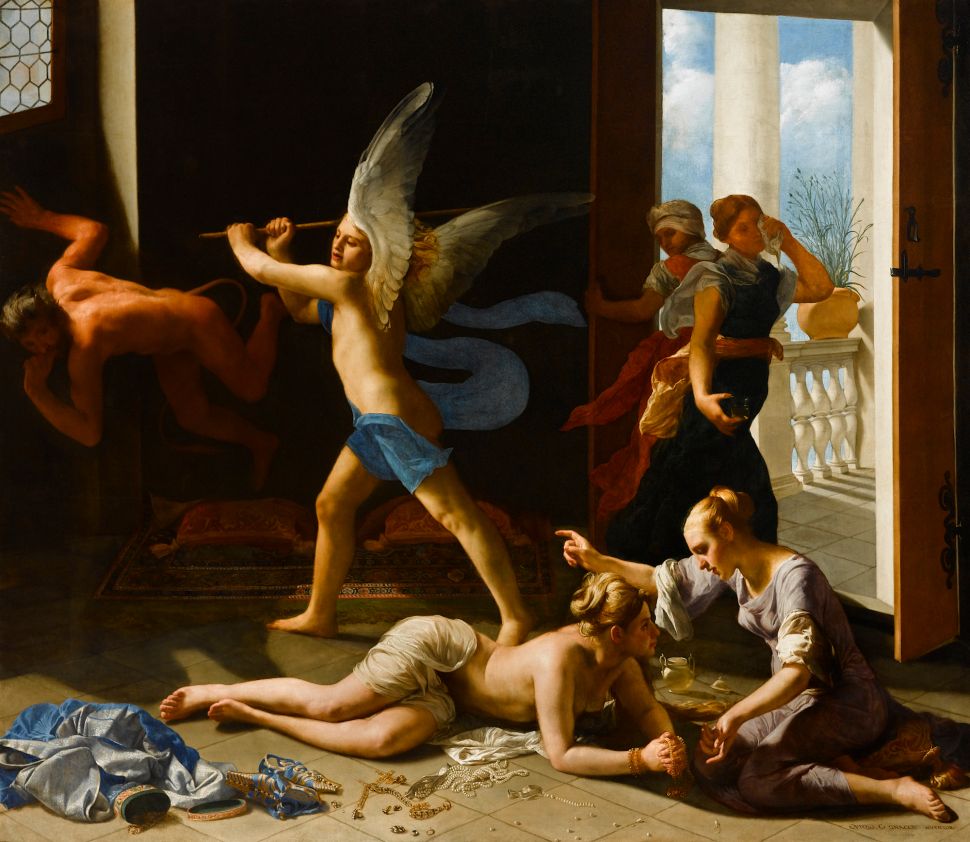