This morning a Donald Trump supporter who lives in Rep. Jan Schakowsky’s Illinois Congressional district organized a rally outside of the Congresswoman’s Evanston office demanding investigations into Robert Creamer and others alleged to have incited violence at a Trump rally in Chicago in March.

Creamer is Schakowsky’s husband and the political consultant with Democracy Partners who appeared in a surreptitiously recorded undercover video in which he and associates from Americans United for Change seemed to take credit for planting agitators at Trump rallies. In the videos, Creamer also claims to work on behalf of the Democratic National Committee and the Hillary Clinton campaign.

Suzzanne Monk attended the Trump rally which she claimed descended into “a riot,” and was motivated to act by her frustration at the seeming inaction of law enforcement. Initially, she began a petition on Change.org which garnered about 100 signatures. She knew of Schakowsky’s Republican opponent Joan McCarthy Lasonde’s call for investigations and said, “I was inspired to see her stand up and use her voice.” Eventually Monk’s petition came to the attention of Lasonde’s campaign and they helped her to coordinate today’s demonstration. Monk and Joan Lasonde did not meet until this morning’s event.

Lasonde was on hand at the protest outside of Schakowsky’s Evanston Congressional office and made a speech attempting to link the Congresswoman to her husband’s actions. While Monk criticized Creamer and his association with the Democratic Party, Lasonde directed her comments to her opponent’s alleged involvement:

“This is about Schakowsky, not her husband. Schakowsky’s campaign is a client of Democracy Partners, the criminal operation at the center of the video evidence. Don’t think Schakowsky doesn’t know. On the same night as the Chicago Trump rally cancelled for violence, Schakowsky herself led a separate protest against a GOP dinner at the Palmer House. It was just as provocative and we are lucky violence didn’t break out there, too.”

A group of about four dozen protesters escorted by police then marched the two blocks to the Evanston post office chanting “Hey, hey, ho, ho, what did Jan Schakowsky know?” Evanston police officers on the scene reported no problems as the rally and marchers were generally peaceful and well-behaved.

‘Political violence is the last straw. We have to preserve our freedom. That’s why I’m standing here.’

Once at the post office, Monk read the letters that she had prepared to mail to the Federal Bureau of Investigation, Federal Elections Commission, and Illinois Attorney General. The letters outline the evidence presented in the videos and read in part:

“As citizens and voters of Illinois, and these United States, we DEMAND that an IMMEDIATE and thorough investigation is begun into the . . . allegations, and that charges be filed. . . Additionally, we demand the investigation of the DNC, the Hillary Clinton campaign and Representative Jan Schakowsky and their involvement with Democracy Partners and Americans United for Change and these Illegal actions.”

The letters concluded, “Sincerely, Concerned Illinois Citizens” and had about 50-60 signatures apiece, supplementing the online petition.

The rally seemed to attract an eclectic group of Lasonde supporters, Schakowsky opponents, and independent voters of varying backgrounds. Alexander Duvel, carrying a sign reading “WHAT DID JAN KNOW?” and wearing a beard, pony tail and sandals seemed somewhat out of place at a rally organized in opposition to progressive Democrats. The self-proclaimed independent voter led chants on a bullhorn and said, “Political violence is the last straw. We have to preserve our freedom. That’s why I’m standing here.”

Christine Kreutz of the Rogers Park neighborhood of Chicago had tickets to the March Trump event at the University of Illinois at Chicago as a birthday gift from her husband. Once the violence started, however, she said, “He and I had to run for our lives.” She heard about today’s rally on the radio and decided to attend because she felt that somebody should be held accountable for what happened there.

According to Lasonde, Schakowsky responded to Lasonde’s original calls for an investigation by saying nobody did anything wrong and that this is just a “manufactured scandal.” Ben Head, Schakowsky’s Political Director, refused to provide a comment for this article, citing Observer’s ownership by Jared Kushner, who is married to Donald Trump’s daughter.

Keith Liscio is a small businessman and resident of Illinois’ 9th congressional district. He is a longtime observer of Illinois politics. 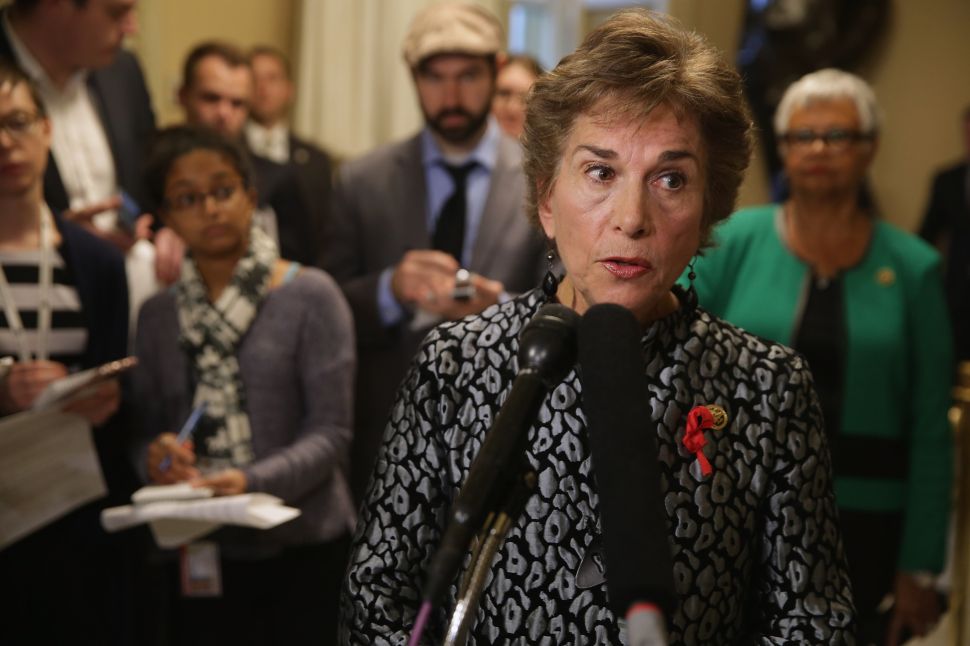