Last week, the Observer uncovered a tape from 2006 that revealed Democratic presidential candidate Hillary Clinton taking the position that America should have intervened in the Palestinian election that brought Hamas to power. With so much talk from her Republican rival Donald Trump about a “rigged” election, the story generated record traffic for the Observer and was widely reprinted and massively retweeted.

But another section of the same tape—which was recorded on September 5, 2006, by Eli Chomsky, who was an editor and staff writer for the Jewish Press, where then-Senator Hillary Clinton was visiting on a round of editorial boards as part of her shoo-in re-election campaign—reveals a side of Hillary Clinton that is just as surprising, if not quite as tantalizing. The tape has not been heard for more than 10 years until Chomsky brought the cassette and a battery-operated cassette player into the Observer’s offices last Friday.

Clinton is captured on audio discussing the recent events in Lebanon, which had undergone a year of searing violence that culminated in the 34-day long “2006 Israel-Hezbollah War, ” which killed and wounded thousands on each side and is considered by many the first skirmish of today’s ongoing Iran–Israel proxy conflict.

While surely playing to the room of Jewish Press editors, Ms. Clinton’s take on the conflict is strikingly strident. As with the Hamas election, she seems to believe that US interests cannot allow particular outcomes, even if they are voted on by sovereign people. She states at one point, “we cannot let” the Lebanese people elect Hezbollah representatives to their parliament. She also reveals a view of American exceptionalism seemingly more in keeping with post-Sept 11 neo-conservative dogma than with a 2016 base that carried a progressive pacifist to 23 victories in this year’s Democratic primaries.

In one memorable section, Ms. Clinton says that America should have rebuilt the Lebanese state amid the vacuum that appeared after former prime minister Rafic Hariri was assassinated (probably by Hezbollah) in February 2005. She takes the Bush administration to task for failing to “get that Lebanese government in any kind of shape” and dismisses the idea that others could have stepped in, saying, “You can’t count on the Europeans to do it.” This is hardly in keeping with the cautious, coalition-building approach of the Obama Administration, which she joined as Secretary of State just two years after this tape was recorded. She also reveals the extent to which she believes in “carrot-and-stick” diplomacy, saying that the US should be aware of what “we can do to them” if they fail to “undermine Hezbollah.”

Displaying her usual mastery of the subject matter, Clinton goes into a detailed analysis of the facts on the ground:

“I don’t think we’re in a good situation. I’m not going to sit here and say that I know what the answer is. I don’t know what the answer is. There’s something of a missed opportunity in the sense that … you know, everyone can be a Monday morning quarterback, but Israel withdrew from Lebanon, and Syria remained, and eventually Syria withdrew in the wake of the [former prime minister of Lebanon] Hariri assassination, we basically didn’t do very much to get that Lebanese government in any kind of shape. We didn’t. That’s just a fact, none of us did. You can’t count on the Europeans to do it. If it hadn’t been us, with Israel maybe, with Great Britain, you know, trying to support the better elements of that government, trying to help them understand that we cannot let a terrorist organization inside a government. You cannot do it. You cannot have that and expect a democracy to survive. It will not work. But you know, they basically gave in to Hezbollah, put them in the government basically gave Hezbollah southern Lebanon as best as I can determine. A state within a state. An army, a government and now a lot of it depends, I don’t have a lot of confidence in the force they’re putting in there because nobody will say they’re willing to disarm Hezbollah. That’s the problem. The UN resolution said originally you had to go in and disarm Hezbollah. Now we’re kind of playing catch-up. They said, ‘Oh, the Lebanese Army will do it,’ well, that’s not going to happen. So part of our challenge is to figure out how to put enough pressure on what’s left of the Lebanese government so they feel some, you know, they’re caught between what they think they want and what they think we can do to them if they don’t do something to hem in and undermine Hezbollah. At some point if Syria and Iran keep finding them and providing weapons to them and there’s no countervailing force…”

Last week’s Observer revelation, with its allusion to fixing the outcome of the elections in Palestine and coming hours before FBI Director James Comey re-opened the investigation into Hillary Clinton’s handling email, created a national stir. As expected, Trump backers and Hillary haters jumped all over the story and shared it faster than just about any story in Observer history; Wikileaks alone was retweeted 7000 times when it tweeted our story.

But one of the surprising elements to the reaction was the way it was cited by those not often aligned with the Observer’s perceived editorial slant.

Despite the source and motivation behind publication, this will be a valuable footnote in the history of how the US destroyed Palestine.

this article, its subject, its author, and the publication that ran it are like a matryoshka doll of cynicism https://t.co/JWgLqRpoqJ

Max Blumenthal, who writes on Middle East affairs and is a frequent critic of the Observer, tweeted “Despite the source and motivation behind publication, this will be a valuable footnote in the history of how the US destroyed Palestine.” The Palestinian blogger @WaladShami tweeted our story to his 27,000 followers and was retweeted by Ziad Jilani, the Intercept writer who earlier today noted that “Neocons and Democratic hawks had near unanimous views in 2002.” (My personal favorite reaction was supplied by Vice News tech editor Noah Kulwin, who deftly weaved Russia into the mix, tweeting that “This article, its subject, its author, and the publication that ran it are like a matryoshka doll of cynicism.”)

To those criticizing Hillary from the left, the Hillary on today’s tape, stridently hawkish and interventionist, will surely raise even further questions about Clinton’s commitment to democracy and the kind of light-touch foreign policy pursued by the Obama Administration. 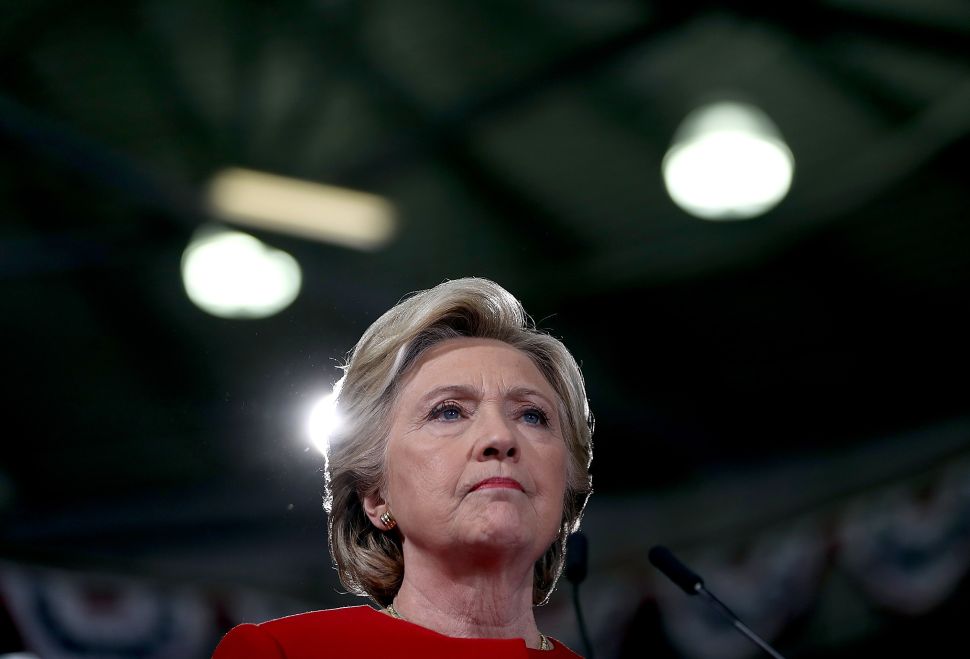