Hillary Rodham Clinton will become the first woman to win the presidency tomorrow, decisively defeating Donald Trump in no small part due to unprecedented Latino turnout.

The Party Crasher predicts Clinton will win the Electoral College vote 322-215, capturing virtually all of the swing states, as President Barack Obama did in his 2012 victory. Reports of Trump closing the gap at the end are reminiscent of past elections where the polling margins tightened in the closing days, only to widen back out at the end—including 2012, which was also what followers of the stock market would recognize as a “dead cat bounce.”

Early voting reports in Florida and Nevada indicate impressive Latino turnout thus far, and The Party Crasher, consequently, expects both states to tip into Clinton’s column, cutting off any path to victory for Trump. There is no realistic scenario by which Trump can lose Florida’s 29 electoral votes and compile the 270 electors necessary to win the election.

While the Real Clear Politics polling average in Florida shows Clinton ahead by only 1 percent as of Sunday—essentially a statistical tie—a Republican poll conducted by Remington Research was the only poll in the last five that showed Trump ahead, and the four-point margin in the Remington poll significantly skewed the average. (As a rule, The Party Crasher ignores any polling conducted by partisan pollsters, also scrupulously disregarding any polls that are conducted on behalf of Democrats.) All the remaining polls included in the RCP average since October 27 show Clinton with a slight but steady lead in the Sunshine State.

Additionally, estimates cited by The Washington Post on Nov. 5 indicate that the Latino vote in Florida may be up in excess of 150 percent over the same time period in 2012. At this point, based on the available information, this columnist feels exceedingly confident that Clinton will capture Florida.

In Nevada, the state’s leading political analyst, Jon Ralston, has been reporting for days a surge in Democratic early voting generally and Latino votes specifically. Numerous news reports back up Ralston’s reporting. While a recent CNN poll gave Trump a shocking six-point lead in Nevada (certainly an outlier as compared to other recent polling), The Party Crasher learned years ago not to bet against Ralston—nearly a lone voice in predicting Democratic Sen. Harry Reid’s 2010 reelection—in the Casino State.

North Carolina is another state where Clinton has led most recent polling but now trails in the RCP average because of one very large outlier (a WRAL-TV/SurveyUSA poll showing Trump up seven points) and two Republican pollsters (Trafalgar Group, Remington) shockingly showing the Republican candidate ahead. These are the only three polls, out of the last 10 in the RCP listings, showing Trump ahead in the Tar Heel state. The Party Crasher expects Clinton to prevail narrowly in North Carolina, picking up 15 electoral votes that President Barack Obama failed to get in 2012.

This columnist also expects Clinton to win the Rust Belt states where Trump has frantically attempted to expand the map: Pennsylvania, Michigan and Wisconsin. Clinton has been ahead in all recent polling in these three states and they do not appear to be in doubt, despite Clinton’s decision to campaign abundantly in Pennsylvania and Michigan. (Neither of those states have early voting, so getting out the vote on Election Day is crucial, and nothing more should be read into her visits to those states.)

That is not to say that Trump won’t gain ground in the Rust Belt. The Party Crasher predicts that Trump will carry onetime bellwether Ohio’s 18 electoral votes. Despite a Columbus Dispatch poll showing Clinton moving narrowly ahead, Trump’s overall polling leads and troubling early voting numbers for Team Blue in key Democratic counties—particularly Cleveland’s Cuyahoga County—point to a Trump win.

The other clear bright spot for Trump in the Midwest is Iowa. It appears very clear now that Trump will flip the Hawkeye State, with its six electors, into the Republican column for only the second time in the last eight elections and the first time since 2004.

But this columnist sees no other states besides Ohio and Iowa flipping from blue to red this election, and their defections from the Democratic fold will be partly offset by North Carolina going blue for only the second time since 1976. Clinton remains well ahead in Virginia polling, and while Colorado is now close, it is crucial to note that Democrats have consistently overperformed their polling in statewide races in the Centennial State in the last three election cycles (2010, 2012, 2014).

Democratic hopes to put Arizona and Georgia into play appear unlikely to come to fruition, as Trump has held consistent leads in both states recently. It would be a surprise for either state to flip to blue, but Clinton doesn’t need them. And the third-party boom of independent Republican candidate Evan McMullin, who a couple weeks ago appeared poised to take Utah’s six electors, seems to have receded, leaving Trump ahead in the Beehive State.

Odds and ends include three individual electoral votes: the single elector up for grabs in both Maine’s 2nd Congressional district and Nebraska’s 2nd district, and an individual Democratic elector in Washington state who has recently made news with his public declaration that he will not cast his vote for Clinton, who is safely going to win the state. If this elector makes good on his promise, it will reduce Clinton’s expected haul by one electoral vote. The Portland Press-Herald, whose polling of rural Maine has been very good in recent years, reported on October 30 that Clinton is surging ahead in the rural district that once looked like it might be headed in Trump’s direction. And while there has been a dearth of polling in Nebraska’s Omaha-based 2nd District, Trump’s strength in neighboring Iowa and Missouri does not portend well for Clinton in the one Nebraska district that gave Obama an electoral vote in 2008.

All in all, it adds up to a victory for Clinton, which she should savor while she can. With Republicans certain to retain the House of Representatives and probably no fewer than 49 votes in the 100-member Senate, her prospects of passing any consequential legislation are virtually nil, and House Republicans appear poised to begin fresh investigations of her before she even takes the oath of office. Congressional Republicans will be helped immensely in their task by Clinton’s incredibly low popularity with the public. America’s first woman president is in for a very bumpy ride, and if Republicans get their act together and nominate a viable presidential candidate in 2020, it could be a short ride.

Note: The Party Crasher thanks Allan Keiter and 270ToWin.com for creating a custom map for use in this column during this election season. 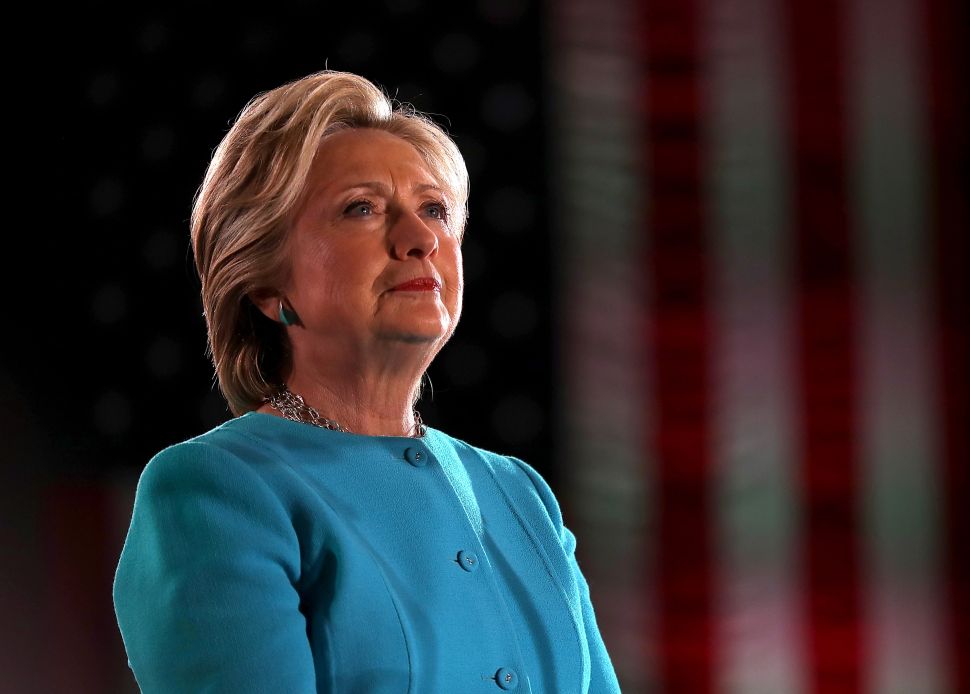