Moments after Melania Trump’s speech against cyberbullying Thursday, CNN personalities were stunned at the irony.

“All I kept thinking was `Have you met Donald Trump?’” asked Dana Bash

A few minutes later, Brooke Baldwin added “What she said was lovely, but has she met her husband?”

Throughout this campaign and long before that, Trump has sent Tweets — at all times of day and night — attacking his rivals and enemies, real and imagined, many of them women insulted for their appearance.

Along with his casual sexism and misogyny (and his racism and bigotry) the main Trump stain on this campaign (aside from his ignorance and bellicosity) has been his internet viciousness, the illumination of his authentic troll nature.

In Mrs. Trump’s speech, she made statements like: “I do worry about all of our children. As adults, many of us are able to handle mean words, even lies. Children and teenagers can be fragile… We have to find a better way to talk to each other… It is absolutely unacceptable when it is done by someone with no name hiding on the internet… We need to teach our youth American values: Kindness, honesty, respect… Our culture has gotten too mean and too tough.”

One of Baldwin’s skeptical guests was Juliet Williams, a professor of gender studies at UCLA.

“It’s a little bit too much to have Melania Trump now coming and lecturing us about family values,” Williams said. “The question I would like to ask Melania is `What do you say about this to your 10-year old-son?’”

She was referring to recorded comments that Trump made in 2005 — which were recently exposed — that he likes to approach strange women and kiss them and “grab ‘em by the pussy.” They let him do it, Trump explained, because he’s a star.

“Do you say, `Look, honey, it’s OK if you make jokes about grabbing women by the P-word just as long as you keep it in the locker room and don’t let anybody record it?’” Williams said.

This issue came up again on CNN’s on The Lead  when host Jake Tapper asked Trump aide David Bossie about angry and menacing Trump statements that are replayed exactly as he said them in pro-Clinton ads.

“They’re in the gutter,” Bossie said of the Clinton campaign. “All they have is fear-mongering.”

Later, Tapper returned to Melania Trump’s speech, calling it “not a little bit discordant” that she would discourage what her husband does so well, engage in cyberbullying.

When it was time for Out Front with Erin Burnett, guest Jamie Gangel called Donald Trump “the poster child for cyberbullying.”

“This is just ridiculous,” she said. “Of all the causes that a potential First Lady can pick… That kind of thing just doesn’t feel very genuine.”

Next came Anderson Cooper 360, with the host saying: “Her husband is part of the problem. We all know he’s made fun of people’s looks and people’s intelligence.”

“If it’s not OK for kids to do this,” Cooper asked Trump campaign manager Kellyanne Conway, “why is it OK for adults, for Donald Trump?”

Conway responded that a certain “washed up journalist has been tweeting me the `F-Word’ every night.” Perhaps she was trying that tired Trump campaign trope of false equivalence. The host wasn’t buying it.

COOPER: “Doesn’t it start at home? Isn’t the problem at her dinner table?”

CONWAY: “No. It’s not at her own dinner table… Look. The haters are out today for Melania Trump because she did a phenomenal job.”

This brought a smile to the face of John King of CNN.

“Her argument today was with her husband,” King said. “Sorry.”

On MSNBC, reaction to Melania Trump’s first speech since the Republican National convention was a little more subdued. Chris Hayes on All In said “Melania Trump wants to focus on cyberbullying even though her husband is known for weaponizing Twitter. Maybe Melania was trying to reach an audience of one.”

And on The Last Word with Lawrence O’Donnell, the host said “The wife of the world’s biggest, most out-of-control cyber bully wants to assume the position of First Lady so she can stop cyberbullying.”

O’Donnell showed Trump’s tweet to Cher about “your massive plastic surgeries that didn’t work” and also the one about Arianna Huffington. “I fully understand why her husband left her for a man,” Trump wrote of Huffington.

One of O’Donnell’s guests was Ana Marie Cox, who covers politics for MTV.

“He does save his real venom for women,” she said of Trump, before adding that she used to wonder if Melania Trump was a robot but decided she wasn’t because “only a truly delusional human being could give a speech like what she gave and survive it. A computer couldn’t handle it.”

After discussing racist and anti-Semitic messages sent by Trump loyalists to journalists, Cox wondered if Trump’s wife was sending him a message that he might absorb on some unconscious level because he saw it on television, which is his only reality, the only way he can be reached.

As for spouses being used to show the “softer side” of a candidate, Cox said “We actually have evidence of what he’s like… There’s no hidden depth to him… He’s exactly the jerk you think he is.”

But the surest way to tell that Melania Trump’s speech was a setback to her husband’s campaign was to see that it was barely covered on the right-wing and reactionary Fox News Channel. The only significant mention came at 9:45 p.m., in a short, late segment of The Kelly File.

Kelly suggested Mrs. Trump check the other side of the pillow in her bed for offensive Twitter users.

Konst said “Her husband’s had exactly the opposing message, that we need to toughen up, we need to be rough.”

“Heal thy husband first,” she said. 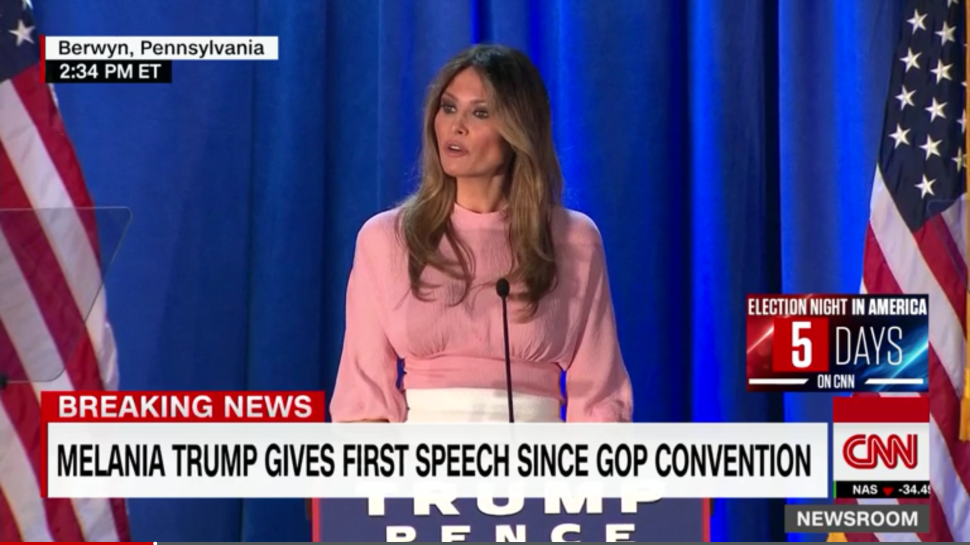