The agenda, five months in the making, includes bills that call for the creation of a task force to assess the city university system’s affordability, admissions and graduation rates, a report on the use of long-acting reversible contraceptives such as intrauterine devices, sexual assault awareness and prevention training for cab drivers, a street co-naming for the original Ms. Magazine headquarters and expanding the definition of employer under the human rights law to offer protections for domestic workers. Brooklyn Councilwoman Laurie Cumbo, the caucus co-chair, recalled Trump’s past assertions that pregnancy in the workplace is an “inconvenience” and the 2005 video that caught him describing how his wealth and influence enabled him to sexually assault women with impunity—and specifically to “grab them by the pussy.”

Cumbo voiced her rage and disgust that such language “will be spoken in the White House.”

“This election has fired me up like I’ve never been fired up before,” Cumbo said. “This is our time. I’ve never been shaken to my core like I have been through this electoral process.”

The goal of the package, she said, is to make sure that women’s rights are protected, adding that “this is such a phenomenal time in our her-story.”

“We have to tear this nation upside down,” continued Cumbo, who also serves as chairwoman of the Council’s Committee on Women’s Issues. “We gotta set it right and we have to utilize this as our battlecry to make sure that women and girls all across this country know that they can be whatever they want to be.”

The councilwoman added that the entire caucus will participate in the Women’s Million March in Washington, D.C. on January 21.

The package also contains resolutions calling for a study of toxins in cosmetics, support for a New York State bill that bans employers from asking potential applicants for their salary history and another state bill that provides domestic violence survivors with better access to breaking leases.

The package also includes bills that have already been signed into law: a comprehensive plan to address unpaid caregivers’ needs, providing feminine hygiene products to students for free while they are on the premises of the New York City Department of Education and a report on procedures and policies for the Rikers Island nursery program.

Last month, ahead of the presidential election, a multiracial and multigenerational group of women protested outside Trump Tower where they lambasted him a “sexual predator” over the crude tape and for his stances on women’s issues. A similar rally led by New York’s female Democrats took place at the Manhattan headquarters and included Public Advocate Letitia James, Manhattan Borough President Gale Brewer and Congresswoman Carolyn Maloney.

Councilwoman Helen Rosenthal, the caucus’s other co-chairwoman, said that the presidential race exposed the struggles and inequities that women across the nation face. She noted that over the past three years, more women have served in senior leadership roles within the mayor’s office and city agencies and that more resources have been allocated to increase participation of minority- and women-owned businesses and enterprises.

“It’s a challenge that the New York City Women’s Caucus is committed to and one we will meet by continuing our work to shape local, state and national policy on education, healthcare, public safety and labor,” Rosenthal said, alluding to the candidacy of Democratic nominee Hillary Clinton, who Trump defeated in the Electoral College earlier this month. “And as a certain first lady once said, women’s rights are human rights.”

Members of the de Blasio administration also came out to express their support for the agenda, highlighting some of the work the mayor has done to promote gender equity.

“It’s great to be in the room with women and I think that power is in the house,” Azadeh Khalili, the first-ever executive director of the city’s Commission on Gender Equity whom de Blasio appointed in March, said. “I really believe I want every woman and every girl to know that in New York City you have a mayor who’s committed to women and girls and you have a City Council that has made a commitment to making sure that we create better outcomes for every woman and girl.”

Cecile Noel, commissioner of the Mayor’s Office to Combat Domestic Violence, noted that in October, the mayor announced Paid Safe Leave legislation, which would allow domestic violence survivors to take paid leave from work to deal with urgent safety needs without fear of penalty. She also said the city is putting housing legal assistance in the family justice centers.

“Our mayor is behind us in so many things and we have a phenomenal leader in our First Lady, who sees the importance of really doing this work and pushing the agenda, being the leader, and so we are so happy,” Noel said. 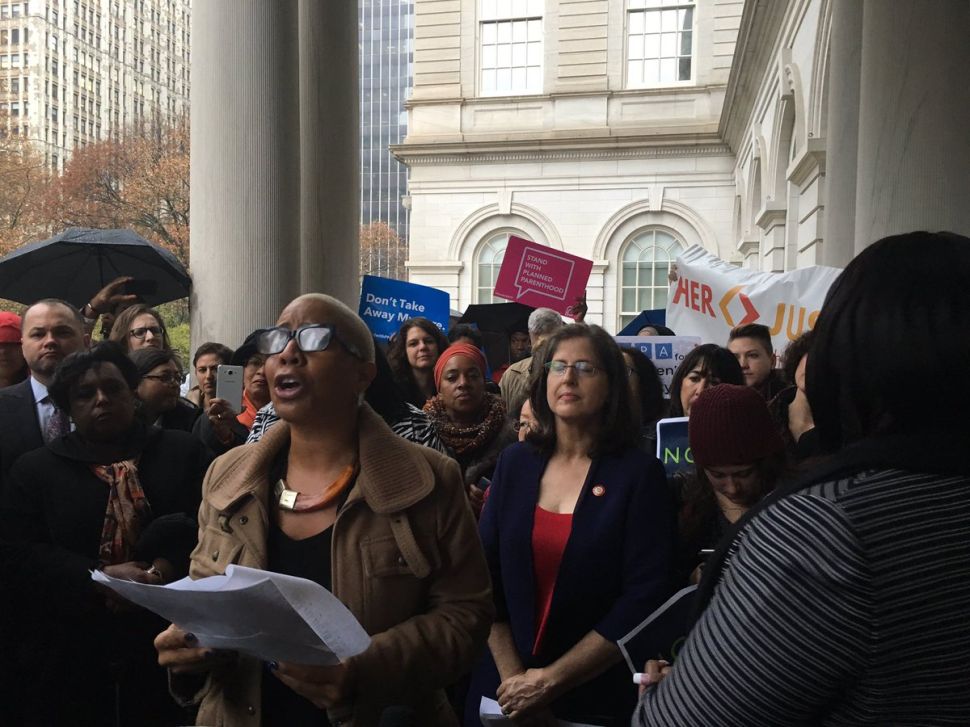