Comedian Dave Chappelle has been prepping for his November 12 hosting slot on Saturday Night Live with a series of surprise shows at The Cutting Room in New York. On Friday night, he shocked the crowd with a 60-minute set largely devoted to slamming Hillary Clinton.

He was particularly agitated about what he believes was Clinton’s role in leaking a surreptitiously recorded conversation between Republican nominee Donald J. Trump and TV personality Billy Bush. “What I heard on that tape was gross,” Chappelle said. “But the way I got to hear it was even more gross. You know that came directly from Hillary.” He stated this had put him off a candidate he had already known was “not right.” He likened voting for her to a hypothetical situation of actress Halle Berry breaking wind in his face during sexual relations. “I’m still going to go for it,” he said. “But I wish she hadn’t done that thing.”

Chappelle further shocked the New York crowd by defending Trump. He took issue with the media stating as fact that Trump had admitted committing sexual assault in the recorded conversation. “Sexual assault? It wasn’t. He said, ‘And when you’re a star, they let you do it.’ That phrase implies consent. I just don’t like the way the media twisted that whole thing. Nobody questioned it.”

The comedian stated that Trump’s resilience in the face of the leak had impressed him. Comparing Trump to The Terminator, Chappelle said, “That would have devastated anybody else.” Chappelle added that Trump’s handling of the debate immediately following the controversy had won him over. Referring to Anderson Cooper and Martha Raddatz’s hostile questioning, he said, “Something about this was backward. A gay white man and a white woman asking a multi-billionaire how he knows the system is rigged and insisting it’s not. Does that sound right to you? It didn’t seem right to me. And here’s how you know Trump is the most gangsta candidate ever. They asked him how he knows the system is rigged and he said, ‘Because I take advantage of it.’ He may as well have flashed his membership card for the Illuminati right then.”

Noting that he voted early in rural Yellow Springs, Ohio before heading to New York, Chappelle said he “didn’t feel good” about voting for Clinton. “She’s going to be on a coin someday. And her behavior has not been coin-worthy,” he said. “She’s not right and we all know she’s not right.”

Chappelle noted that he’d been present at a late October going-away party at the White House, sponsored by BET. “Everyone there was black – everyone except Bradley Cooper,” he said. Chappelle listed attendees including Supreme Court Justice Sonia Sotomayer, singer Usher, DNC chairwoman Donna Brazile, and DJ D-Nice, who performed at the hush-hush soiree. He claimed that, at the end of the night, he grabbed the mic and waxed lyrical about Frederick Douglass, concluding that even though the current election has been “gross,” he still loves the United States of America.

The comedian wasn’t feeling so much love for women’s rights, gay rights, and transgender rights activists, saying, “They should not be having that conversation in front of black people. You go ahead and feel something about your rights. But if you’re putting sexism and homophobia and transphobia in front of racism, you should be ashamed of yourself.” Chappelle still slammed North Carolina legislation stating that transgender people must use the public restroom that aligns with the sex stated on their respective birth certificates. “If you need to show your birth certificate to take a dump at a Wal-Mart in North Carolina, that’s insane.” Chappelle noted he would rather not have “a woman with a dick” stand next to him at a urinal. He also said he wasn’t happy about rumors that Caitlyn Jenner would pose nude for Sports Illustrated. “Sometimes I just want to read some stats.” 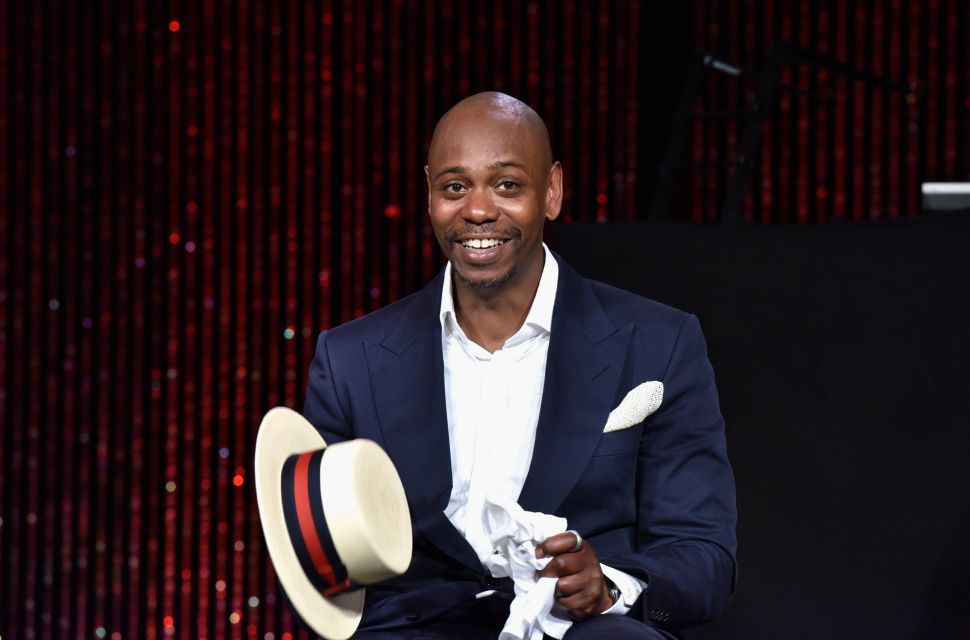