With a title like “Desire,” you can put practically anything under one roof. That’s what the list of 50 artists feels like for the show that opens November 30 at the Moore building in the Miami Design District.

“We wanted to have historical works by Picasso and Picabia and Diego Rivera and also some younger artists. It’s just some themes that I thought would be important with artists who were modern and contemporary, and we have a range of media—paintings, sculpture, photography, video art,” she said.

Two works are at the core of the show. One is a painting of a snow-capped mountain silhouetted against the sky by Ed Ruscha called, as you might have guessed, Desire. The other is the late Zaha Hadid’s sculpture, Elastika, in the courtyard of the Moore Building. “It’s almost an homage to the theme—it’s like chewing gum that’s expanding from one floor to another. It’s part of the building,” Widmaier-Picasso said. And the notion of desire in the exhibition seems nothing less than elastic. “I’ve been interested in the theme of eroticism for a while, for many reasons, but also because I wrote a book in 2005 about Picasso and eroticism, called Art Can Only Be Erotic.” (The book accompanied a traveling exhibition which Widmaier-Picasso curated.)

The curator also organized “Picasso’s Picassos: A Selection From the Collection of Maya Ruiz-Picasso,” an exhibition of works from her mother’s collection, which can be seen at Gagosian on Madison Avenue in New York City through December 17.

The painter (and recovering journalist) Walter Robinson, showing two paintings in “Desire,” reflected on the theme: “It’s an elemental force, and functions in an elaborate dynamic with similarly powerful forces of culture, history, civilization and ideology. Evolution is perhaps its grandest manifestation, and on a small, immediate, aesthetic sense, the subject of all my paintings, whether romances, desserts, kittens or striped shirts.”

Widmaier-Picasso said that desire comes at “a good moment to do a show involving some more contemporary artists. We wanted to show desire that was clearly expressed, along with desire that is more abstract, as with Ed Ruscha, or Alex Israel, or photographs by Francesca Woodman, where she’s clearly expressing her own desire about showing her nudity.”

Marilyn Minter’s sensuous portrait of a Klimt-ian open mouth, Haze, is also part of “Desire.” “Diana knows this subject. You only have to look at the books that she’s done about her grandfather,” said Minter.

As if that work weren’t enough of a draw for the exhibition, Widmaier-Picasso also promises a “live installation” by Urs Fischer that includes some nude figures posing. “It’s all about the artist and the model—it’s not just about the work that you’ll see, but about the tension that’s created between the person visiting the show and the work of art,” she explained.

Visitors are sure to focus on work by Pablo Picasso that the artist’s granddaughter selected for the exhibition. Only one Picasso work will be on view, Woman in a Rocking Chair, a canvas more than six feet high from 1956.

“All the works in the exhibition are for sale,” Widmaier-Picasso explained, “so it had to be a work that was for sale.

“It’s very much an homage or a wink at Matisse,” she said of the painting, created two years after Matisse’s death, in a palette of bright colors that Picasso could have borrowed from his rival. “You had Matisse, with his glasses, looking at his models in an almost scientific way, and you had Picasso, who saw no difference between his art and his life. Here’s a model sitting in a rocking chair—the movement is very suggestive. Plus, when you look closely, the body of the female is made of sexual organs. The long neck above two breasts is like a giant penis. With the combination of the colors—bright yellow, green and red—you have an abstraction of Venus in that rocking chair.

The exhibition will also show a single work by Andy Warhol, a painting of a female torso from 1977. “People don’t know this series,” said Jeffrey Deitch. “There’s just endless surprises with Andy Warhol.

“We didn’t want to just have the usual suspects,” said Deitch, who made sure that some of his personal favorites, like the underground cartoonist Robert Crumb (or R. Crumb), were in the show. “He was one of the first artists on our list.”

“It’s the text of Psychopathia Sexualis, by Richard von Krafft-Ebing, which I read when I was at Wesleyan,” referring to a 19th century study of sexual behavior, published decades before Freud’s studies, and illustrated by Crumb with images of anxiety-ridden subjects. “I grew up with R. Crumb, that was my education. I had my own versions of R. Crumb, that I drew, on the door of my dorm room. R. Crumb has taken the text and used it as captions and drawn out the content of the book. It’s a remarkable, remarkable work,” Deitch said of the compendium.

“Part of my mission had been to expand the art platform, to open it up, so it’s not just the top ten, or what you would see at the Museum of Modern Art,” said Deitch, who had high praise for the work of Tom of Finland in “Desire.” “A lot of artists collect Tom of Finland—Richard Prince, for one—and a lot admire the quality of the draftsmanship. I think that’s going to be a big surprise.”

High on Deitch’s list for praise was the artist-archivist Martin Wong, represented by two tondos from Wong’s recent retrospective at the Bronx Museum of Art—“two masterpieces”—one of which Deitch described as “an abstract pattern of bricks with a glory hole in the middle.”

Sometimes desire, as seen in an artist’s work, is tactile enough to push questions aside. John Currin’s A Fool with Two Young Women (2013), shows a female couple, one figure seen from the front, another from behind.

The small painting is one of three by Currin in the exhibition. Widmaier-Picasso could not name the third work; the picture desired by the curator had not yet arrived. For now, that picture may pass by default into the exhibition’s fantasy section.

In the infinitely expanding art landscape of Miami, there’s plenty of space for consenting adults to do whatever gives pleasure—but which gallery will get to call its VIP tours “group sex”? 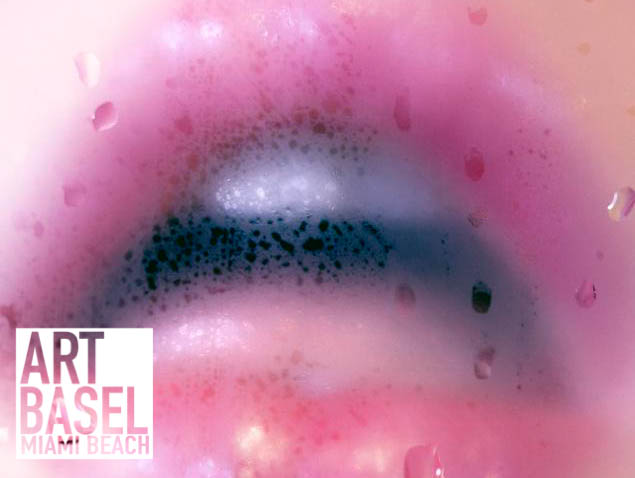