In the second column I wrote for the Observer, all the way back in August 2015, I tried to warn Democrats not to be too smug. I said that all their happy talk about Republicans going the way of the Whigs was foolish, especially at a time when the GOP was regularly handing them their asses on almost every level.

In that article, “Democrat Celebration Is Premature: GOP Hardly DOA,” I noted that Republicans controlled every facet of the federal government except for the presidency, and Democrats had full control (governor and legislature) in only seven states.

Ah, but demography was destiny, and it wasn’t going to be long until Team Blue turned things around. It was just a matter of time. Here we are, 15 months later with the 2016 elections in the rearview mirror. How’d it all work out?

Republicans, facing a daunting map, shattered the Democrats’ vaunted “Blue Wall” by taking Pennsylvania, Michigan, and Wisconsin to win the White House. They held down their losses in the House and also in the Senate—where Democrats were thought to be good bets to win control—to retain their Congressional majorities. On the state level, they flipped the governorship in Vermont—ultra-liberal Vermont, of all places—and pulled into a tie in the state senate in Connecticut to leave Democrats in full control of only five states. Five!

Surely no person with any sense of objectivity (or, frankly, any sense, period) can reasonably claim anymore that Republicans are headed the way of the dinosaurs, or that Democrats are just a cycle or two away from achieving dominance. The Republican Party may have its issues, not the least of which is the conflict between its Wall Street and Main Street wings—a problem the Democrats also face—but winning elections is not one of them. The only time in the last 20 years the Democrats won a general or midterm election when Barack Obama wasn’t on the ballot was 2006, when the plummeting popularity of George W. Bush tanked his party at the polls.

Meanwhile, the Democrats remain the gang that can’t shoot straight. While polling consistently finds that more Americans identify as Democrats than Republicans, and more Americans have a favorable opinion of Democrats than Republicans, the Democratic Party continues to fail badly at its most important task: winning elections. There is an elemental lesson that too many Democrats just don’t get: if you don’t win, you don’t get to govern.

At this point, one can already hear the cries of “Yes, but Hillary won the popular vote!” So she did. That and a dollar might buy you a song on iTunes, if it’s not too new or popular. A focus on irrelevant things is one of the reasons why Democrats continue to lose. You can hate the Electoral College system all you want; I certainly do. But like it or not, it isn’t going away. There are too many states that benefit disproportionately from it, so amending the Constitution or even implementing a work-around like the National Popular Vote Interstate Compact are pipe dreams.

So, what should the Democratic Party do to reverse its generation of failures at the state level, during midterms, and in all presidential elections that don’t involve extremely popular, charismatic candidates?

Well, first of all, it’s long past time to clean house. The hangers-on at all levels—in the Democratic National Committee, in the Democratic Congressional leadership, in the states, and above all, highly paid campaign consultants who are long past their prime—all need to be pushed aside in favor of new leaders with new ideas. Hidebound Democrats continue to rely on the comfortable strategy of identity politics rather than advancing new, innovative solutions to the problems Americans face every day.

Make no mistake, this observation is by no means an indictment of the Democratic Party’s commitments to diversity or to organized labor. It is a moral imperative that the party must never concede an inch on these commitments. But it also must bring more than just the expectation that simply mobilizing its constituent groups will win elections. That strategy failed in 2016.

Republicans have a philosophy, Democrats have a quilt. Anybody can tell you that Republicans stand for low taxes, traditional values, and armed strength (both abroad and in America’s streets). Try asking what Democrats stand for and you’ll hear instead about who they are. That’s fine, but it isn’t a governing philosophy.

Much has been made of the crushing margins for the GOP among non-college white voters, who in an earlier era had been a mainstay of the Democratic coalition. Its outsized performance within this demographic is often ascribed to racism and other prejudices, and let’s be honest, there is plenty of that out there. I grew up in a mostly white, working-class neighborhood, and I saw it firsthand every day.

The Democratic Party should not, and must not, pander to racists, sexists and homophobes, ever. However, it should, by all means, attempt to reach voters who don’t hold those deplorable attitudes.

Much of the voting public this year was so starved for authenticity and truth from politicians that it was willing to accept bullying and crassness as substitutes.

Imagine if the Democrats addressed climate change by telling coal miners something like this:

“We know that protecting the environment means you will lose your jobs, so here’s what we’re going to do. We’re going to aggressively promote tax incentives to get new tech companies to set up shop in coal-mining areas. We’re going to provide grants to train displaced miners to do these new tech jobs. And we’re going to pay you replacement-level wages while you’re getting trained for these new jobs.”

Do you think Hillary Clinton might have improved her prospects in Pennsylvania, a Democratic state for six straight elections, if she had advanced such a program?

It must be understood that Democrats can advance such programs without turning their backs on people of color, the LGBTQ community, or any of the party’s constituent groups. Lost in much of the discussion this year was the fact that the working class is by no means exclusively white (or straight).

There is also continued talk that the Democratic Party can reverse its fortunes with a “50 State Strategy.” This is a laudable goal, but it is this kind of “expand the map” thinking that caused Democrats to waste time and resources this year in states they didn’t need—think Arizona and Georgia—rather than nailing down states they did need such as Pennsylvania, Michigan, and Wisconsin, none of which had gone Republican in a presidential election for a generation, and which Clinton lost by a combined total of a little more than 100,000 votes. Democrats should focus for now on winning where they need to win, and think about expanding the map later.

The Democratic Party must also recognize who its base voters are. For better or worse, it is often difficult to motivate significant segments of the party’s base unless Democrats offer an inspirational candidate, such as Obama. While this fact often drives Democrats crazy, they can either rail against it or accept it for what it is. The party must do a much better job of candidate identification and recruitment, finding innovative candidates at all levels who can create enthusiasm among the base, and then spread that enthusiasm beyond the base. It is worth noting that the last three Democrats to win the presidency were all outsiders who hadn’t been rendered stale by decades in Washington.

But above all, Democrats must not react to this loss the way have they reacted to past losses, with contrition and cowardice. Democrats are so intent on showing how reasonable they are, how willing they are to reach across the aisle and compromise, but this is consistently read by their Republican opponents, and the public at large, as weakness. The party must display the courage of its convictions and actually stand up for its principles rather than cowering in the corner, begging for mercy.

Above all, Democrats need to understand that politics is an art, not a science. If this year’s polling failures didn’t bring that fact home, it’s hard to imagine what would. Stop telling people what you think they want to hear. Much of the voting public this year was so starved for authenticity and truth from politicians that it was willing to accept bullying and crassness as substitutes. Be who you are, not what a focus group tells you that you need to be 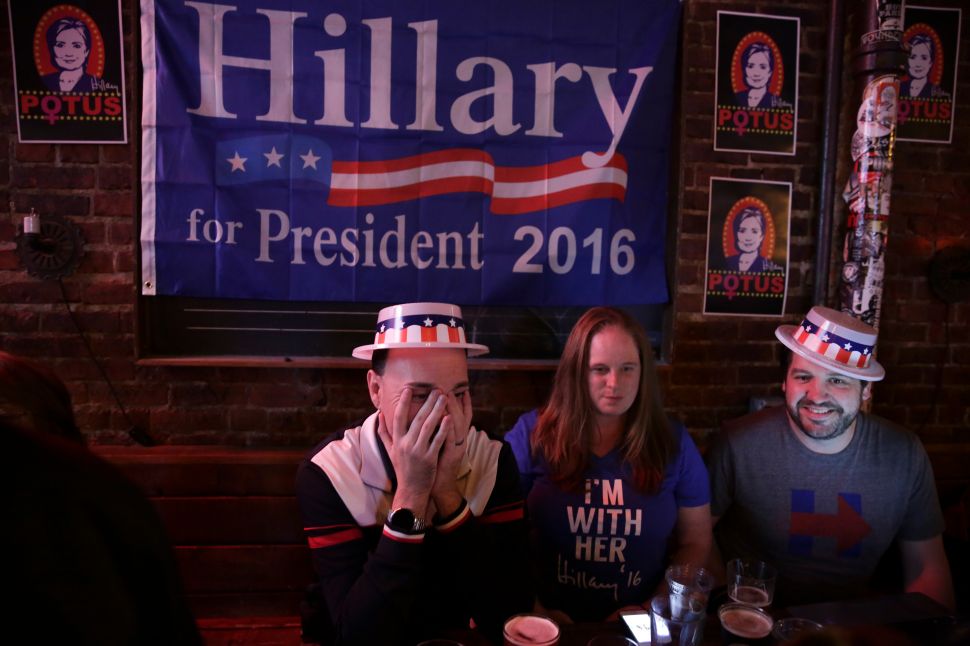