The Manhattan Democratic Party convened an emergency meeting today to nominate a replacement for New York City Board of Elections Commissioner Alan Schulkin, who rocketed to prominence when a conservative nonprofit caught him on hidden camera alleging voter fraud is rampant in New York City’s minority neighborhoods.

Under the eye of Assemblyman Keith Wright, chairman of the New York County Democratic Committee, members voted unanimously to nominate Jeanine Johnson, his chief of staff and attorney—who received a drunk driving charge last year, according to the New York Post. Schulkin told the Observer before the meeting started that he made a decision not to seek a new four-year term on the board last August, well before Project Veritas published the undercover video this October in which he alleged organizations bus voters from poll site to poll site in nonwhite neighborhoods.

He said he chose to step down because he’s “getting a little bit older” and there’s “a lot of things I wanted to do in life” besides being the commissioner, which he said is “a lot of work.”

“The county leader asked me to stay on through certification and we agreed. Our relationship is fantastic,” he said. “He’s worked well with me over the last two years and he has no hard feelings and whoever you guys pick, I will fully support and help in any way possible.”

This revelation is odd, since Schulkin pointedly refused to comply with Mayor Bill de Blasio’s calls he step down after the video surfaced. After the meeting, the outgoing commissioner disputed a question about why he resisted those calls for his resignation when he was planning to do so all along.

“Very simple: because I believe in the integrity of the Board of Elections and it was only one person calling for me to resign, and that was the mayor,” Schulkin said, noting that the city BOE is under the control of the county party organizations and the City Council, not Gracie Mansion. “And I don’t believe the mayor has control of the Board of Elections. So I was not stepping down because he asked me to step down.”

Schulkin, whom the state Board of Elections has subpoenaed, declined to comment on whether he believes voter fraud is rampant, citing advice from his attorneys.

When the Observer pointed out that Bronx Assemblyman Luis Sepúlveda had also called for him to step down, he snubbed the assemblyman.

“I don’t even want to comment on him but the only person of any substance was the mayor. So it was not his call. I took an oath of office and I intended to stay because really the chairman asked me to certify the presidential election and I said, ‘Yes, I would stay on.’ I felt it was my responsibility.”

Wright commended Schulkin for his contributions to the board during the meeting. He also commended New Yorkers for voting overwhelmingly in favor of Democratic nominee Hillary Clinton and said they have “some challenges ahead of us” but that it’s “a very exciting time.”

“I certainly want to say that Alan has been a responsive, hands-on commissioner and it’s not easy getting involved with the Board of Elections in terms of public service as well know,” he said. “First of all, it’s probably not that easy dealing with all of us. All of us.”

Before the meeting started, he said that he “achieved a good working relationship with him.”

Wright acknowledged he himself made claims of voter improprieties hen he failed to win a primary to replace for Congressman Charlie Rangel’s seat in Harlem but said he’s “not gonna bring those up now” or “talk about those things now” and said that he doesn’t know whether voter fraud is widespread.

The assemblyman added that he sponsored a bill to usher New York into the “electronic machine age” because it wanted to make sure that every vote counted.

Johnson said that she is a Democrat “through and through,” insisting that she believes in “the things we have espoused over the years,” particularly since she has been law chair.

She said that the party is dealing with challenges such as compliance with the Americans with Disabilities Act and that Democrats have a responsibility to find a happy medium between protecting the right to franchise “for those who are most vulnerable and those who are not as vulnerable.”

An attendee told the Observer after the meeting that another candidate for the position was pushed out of the way.

“There was supposed to be another candidate who was in the race as of Friday and must have been pushed out by the county leader,” he said.

But Wright said he was not aware of any other candidate.

Members of the Council’s Progressive Caucus—a rival to Wright’s operation—named Schulkin to the BOE in 2014 after one of the assemblyman’s favored commissioner’s abruptly quit in the middle of their term, and Wright missed the deadline to nominate his own replacement. 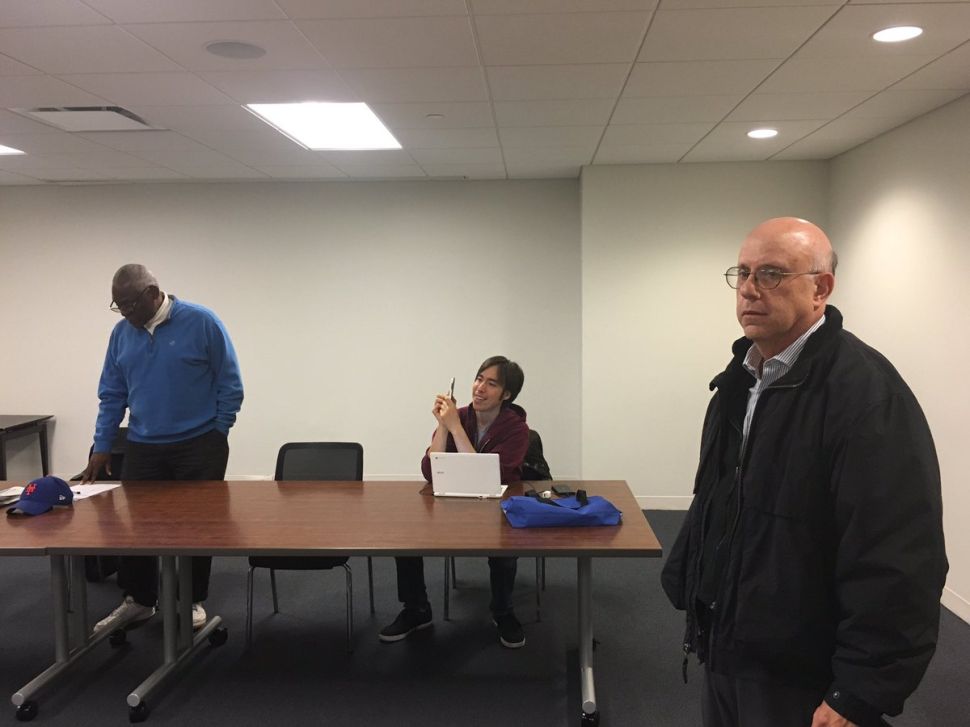