The term “diva” gets kicked around these days, generally with a strongly negative connotation, but fortunately two groups, opera fans and gay men, get it right. (Well, let’s call that one and a half groups, because there is obviously considerable overlap.)

“Diva” doesn’t mean “bad” any more than it means “good.” “Diva” means “goddess,” and, as we all know, gods are beyond good and evil. They are a law unto themselves.

So when we apply that word “diva” to an opera singer, it’s not a responsiblity to be taken lightly either by the singer herself or to her acolytes. Being a diva entails a lot more than, for instance, grabbing a pair of scissors and shredding an unflattering costume, as soprano Beverly Sills once did, and at her La Scala debut yet. No, the diva’s true calling is in her positive aspect, creating a performance so powerful it seems supernatural, transmuting a night at the opera into a voyage of discovery.

If there remained doubts in anyone’s mind that Anna Netrebko ranks with the great divas of operatic history, last night’s performance of Puccini’s Manon Lescaut should dispel them completely. I thought I had come to know this opera pretty well in the 40 years since I first heard it in New Orleans, but Netrebko’s volcanic singing and dazzling acting in this part made me feel like I was present at a world premiere.

The opera is a version of a romantic novel by Abbé Prévost recounting the rocky affair between the 16 year old Manon and her lover the Chevalier des Grieux. She loves him dearly, but she also is very fond of pretty clothes and expensive jewelry and, for that matter, a warm bed to sleep in. (The Chevalier, you see, hasn’t a sou.) Even in exile in the New World, they cannot be happy together: on a lonely road outside New Orleans, Manon breathes her last.

So is Puccini’s 1893 take on this material about true love, or is it about greed? Isn’t the real protagonist here Des Grieux, whose fascination with the capricious Manon destroys his life? Well, that’s what I used to think, until Netrebko’s performance of the title role sent the scales falling from my eyes.

What Manon Lescaut is about, or at least what the opera is about when Netrebko is singing it, is youth, the experience of being young. That was the revelation of last night’s performance, and like all revelations it appears so obvious and so simple that you wonder how you could have overlooked it for all those years.

The libretto is bookended by references to youth: an opening chorus on the text “Giovinezza è il nostro nome” (Our name is Youth) and one of Manon’s final lines before she dies, “Rammenti? Dimmi – la luminosa mia giovinezza?” (Do you remember how radiant everything was when I was young?)

Netrebko brings to the opera an instinctive understanding of just how extreme it is to be young, the feeling of invulnerability and the unslakable appetite for new experiences. Her luscious soprano thundered and soared as no teenager’s voice ever could do, but such vocal abandon depicts precisely the Technicolor IMAX way kids view the world: every instant is a matter of life and death.

At the end of the first act of the opera, Manon and Des Grieux run away together, but the time the curtain goes up on the second act, she’s already the mistress of the filthy rich Geronte. We watch disapprovingly as Manon as flounces around in a slip and kimono, snaps orders at servants and shoves money at her skeevy brother. He mention in passing that she seems out of sorts, and suddenly her demeanor changes, leading into the first and loveliest of Manon’s arias, “In quelle trine morbide.”

Amid all this splendor, she sings, there’s a chill in the air. Nothing here can make her forget her love for Des Grieux. So often Manon seems flighty or even disingenous in this piece, but the delicacy of Netrebko’s singing here, particularly the dreamy descent from high G-flat in the second phrase, instantly made sense of the situation. That she might have lost Des Grieux had never entered her mind. Netrebko’s performance had all the pathos of a child’s first confrontation with mortality.

From here until the end of the opera, the soprano flung out her voice unstintingly. It felt like watching a supernova burn itself out in blinding bursts of flame. Her high C-flat in the love duet honestly I think is the greatest note I have ever heard live.

In the last act, the highlight was not the formal aria “Sola, perduta, abbandonata,” sung with fatalistic restraint, but rather the brief, passionate solo “Sei tu chi piange” in which the delirious Manon wakes to the sound of weeping and wonders why her beloved Des Grieux should be so unhappy. For this moment Netrebko pulled out the final stop in her voice, and the walls of the theater seemed to tremble at her emotional intensity.

It was the sort of performance that throws a shadow even over the most excellent colleagues. As Des Grieux, tenor Marcelo Álvarez was in fresh, pingy voice even if he was styled to look like someone’s creepy uncle. Christopher Maltman’s stylish singing and manic acting precisely suggested a family resemblance between Lescaut and his baby sister.

Marco Armiliato’s no-nonsense conducting had at least the virtue of reining in occasion self-indulgence on the part of his singers. Richard Eyre’s plodding production, which nonsensically updates the action of the opera to the Nazi occupation of Paris, seemed in this revival suddenly to throw off sparks of excitement.

And why not? As a goddess, Anna Netrebko wields the power to transform lead into gold. 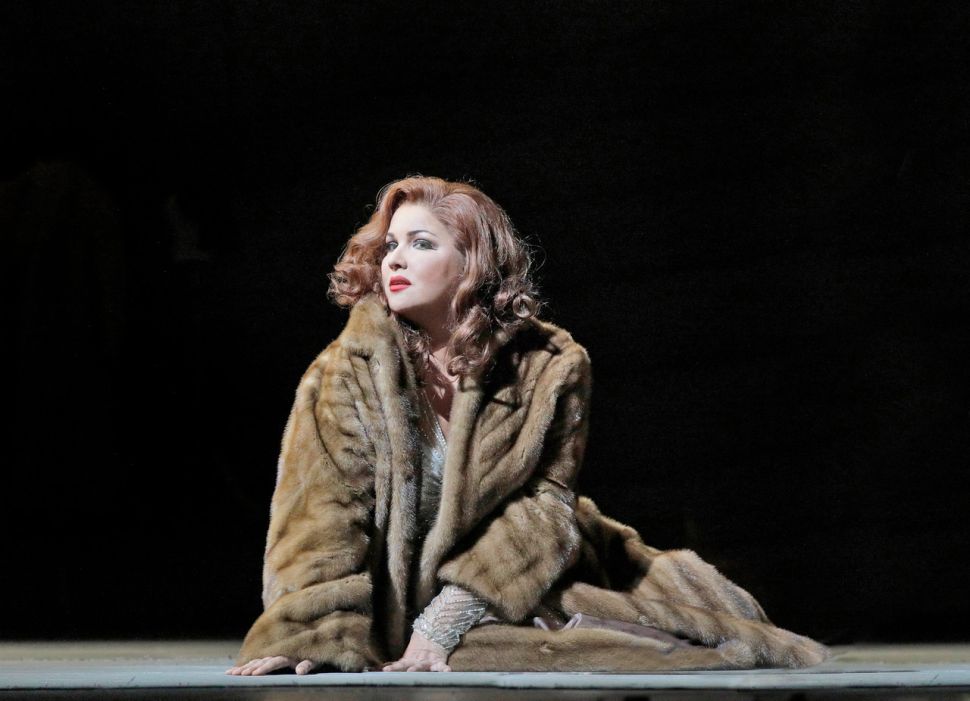