Donald Trump defeated Hillary Clinton by outperforming recent GOP nominees in just about every conceivable demographic. Despite making a wall on the Mexican border a centerpiece of his campaign, Trump received 29 percent of the Latino vote compared to Romney’s 27 percent, and he also got 8 percent of African-Americans compared to Romney’s 7 percent. While Trump’s 24 percent of the Jewish vote didn’t match Romney’s 30 percent, it exceeded McCain’s 22 percent.

What’s notable, however, is that Trump notched those gains while being massively outspent by his opponent.

According to figures compiled by the Center for Competitive Politics, an Alexandria group that opposes caps on political spending, Clinton’s campaign outspent the Trump campaign by more than 2 to 1. While full spending reports are not yet compiled, campaigns typically spend just about all they raise. As of October 28, Clinton had raised $687 million compared to Trump’s $307 million—a 124 percent advantage.

And that doesn’t even count the spending by outside groups (better known as “outside groups”). When added to the candidates’ own ads, Pro-Clinton ads outnumbered pro-Trump ads 3 to 1—a mind-numbing 383,512 ads for Clinton compared to 125,617 supporting Trump. Outside groups raised and spent more than three times as much on Clinton as on Trump. Super PACs and other groups supporting Clinton raised almost $190 million; those supporting Trump pocketed only $60 million.

The results speak for themselves, obviously, but the striking thing here is that Clinton actually did worse in the places where spending was highest. In the six states where Clinton targeted the most spending—Florida, Ohio, North Carolina, Pennsylvania, Nevada and Iowa—she and groups supporting her ran 299,067 ads compared to 89,995 supporting Trump—a ratio of 3.3 to 1. She lost all of those states except Nevada.

Profligate political spending wasn’t limited to Clinton. In fact, the three biggest-spending SuperPACs all supported candidates who lost. PACs backing Hillary Clinton, Jeb Bush and Marco Rubio dropped $275 million on the race. Priorities USA Action lost $132 million in support of Clinton, but at least she made it to November. Perhaps the single most embarrassing ripoff in 2016 politics came via Right to Rise, the PAC supporting Jeb Bush. It spent over $86 million in failing to carry Bush to a single primary victory; he quit after placing fourth in South Carolina.

One of the lessons from this experience comes from David Keating, the president of the Center for Competitive Politics. “Money can’t buy love, and it can’t buy votes. All it can do is help deliver a message. The voters didn’t want what Clinton offered.”

Trump made a selling point out of how he was running his operation, telling voters that he would run the country as efficiently as he was running his campaign. He also derided his rivals’ inefficiency. Appearing on Morning Joe on the day after winning the New Hampshire primary, Trump said of Jeb Bush, “He will spend $100 million on ads…and every time he does a negative ad, my poll numbers go up. It’s a weird thing. But the guy’s a total stiff. He’s not going to win.” That was a particularly devastating hit during a Republican primary, where a substantial portion of the electorate views reckless spending as its number one issue.

Later on in the primary, The Washington Post picked up on the topic, handing Trump one of the few entirely positive headlines he earned in that paper: “Donald Trump is getting a very good deal on how much he’s spending per vote.” For a candidate who made “getting a good deal” a central part of his appeal, that was a valuable story, comparing him favorably to his Republican rivals and to Hillary Clinton and Bernie Sanders.

Interestingly, the same writer who credited Trump with efficient spending later snarked it up with a headline that supposedly captured the amateurism of the Trump campaign. In the October 25 Washington Post, Philip Bump wrote a story titled “Donald Trump’s campaign has spent more on hats than on polling.” The idea was clearly to mock the candidate for the frivolity of his ubiquitous “Make America Great Again” baseball caps, whose production was starving the poor pollsters. Given how badly the public pollsters performed in forecasting this election, one could easily conclude that Trump’s only mistake is he should have made more hats.

The Trump campaign’s unconventional priorities will surely upend conventional wisdom about political spending. In fact, one could wonder if the reason so many Republican political consultants were among the “Never Trump” faction had less to do with Trump’s beliefs and more to do with his contempt for their spendthrift ways. Stuart Stevens, for example, made a fortune as Mitt Romney’s chief strategist in his 2012 presidential run. His public excoriations of Trump, which were consistently cheered by the left in its fetish for right-on-right violence, could easily be seen as a job-protection racket more than an interest in sound political advice. The Trump campaign and its advisers (who include the publisher of the Observer) simply declined to spend the gigantic sums on polling and advertising that consultants—most of whom are pollsters and media guys—consider necessary.

The day before the election, Stevens wrote a column for the Daily Beast bemoaning the fact that Trump was going to lose because he failed to reach out to the growing minority population as effectively as Romney had. He also stated, with no evidence, that “Trump is doing less well with white voters than Mitt Romney.” The next day, that turned out to be wrong. It is worth noting that in 2012’s loss, Stevens’ media firm, American Rambler, received some $23,644,470 for media production, polling, communications and strategy consulting, according to the LA Times.

Ad spending and polling weren’t the only areas in which Trump spent considerably less than Clinton. According to CNBC, by the end of August, Clinton’s ground-game heavy campaign had 800 staffers. Trump had 130.

Rival candidates would undoubtedly point to the roughly $5 billion of free media attention that the data analytics firm mediaQuant estimates that Trump received as the reason he was able to spend so little. He also seemed to be running his own personal national newspaper 140 characters at a time, reaching millions with every tweet.

But complaining that a competitor has an unfair advantage because he’s funny or well-spoken or outrageous or has some other quality that free media admires is absurd. In a media-driven society, candidates may just need to develop those skills the way they’d work to develop policy expertise or debating chops. Hillary Clinton, a former secretary of state, U.S. senator and first lady, had 100 percent name ID and should not have been hard to book on television. She might have driven down her cost-per-vote had she been willing to sit for more interviews.

By the time all the votes were counted, Trump appears to have spent about $5 a vote. That essentially tied him with John Kasich for lowest cost-per-vote of all primary competitors of either party. And it put him miles ahead of some who spent over $100 or the stunning $174 per vote that Michael Bloomberg spent to eke out a third-term victory over a drowsy opponent, comptroller Bill Thompson, who spent 1/14th as much to get 5 percent fewer votes.

Keating points to a well-known fact about moneyed candidates: “Lots of politicians spend tons and get few votes or lose.” He told the Observer about a bunch of recent debacles: “Jeb Bush and his super PAC were way ahead in the money race. He got four delegates to Trump’s 1,543. David Trone spent nearly $10 million of his own money in a Maryland Democratic primary this year. And lost. Napoleon Harris spent $2.1 million the Illinois Democratic primary for Senate and lost. In 2012, Linda McMahon spent nearly $50 million in personal funds in her CT Senate general election race and lost. David Dewhurst spent nearly $20 million out of his pocket and lost to Ted Cruz in the [U.S. Senate] primary.”

All true, but it’s easy to spend a lot and lose. It’s quite another thing to spend very little and win. That’s what Donald Trump accomplished Tuesday.

Maybe the days of government purchases that resulted in headlines about $640 toilet seats in the 1980s have finally come to an end. 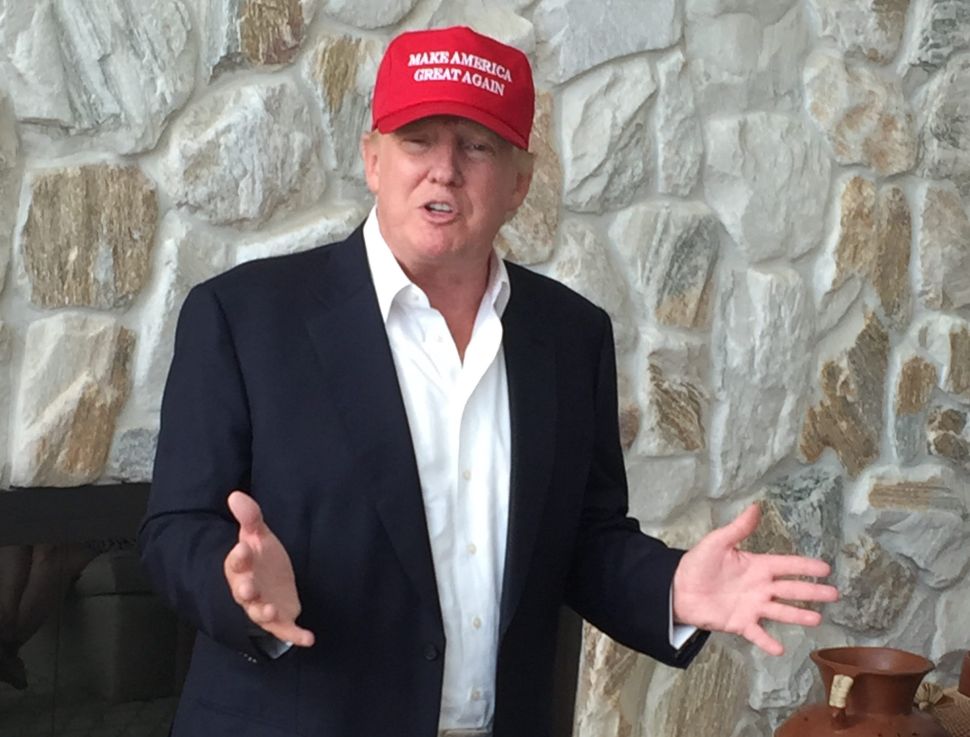