Opening: “Using Walls, Floors, and Ceilings: Alex Israel”
Los Angeles-based artist Alex Israel gets personal with his new commissioned painting for the Jewish Museum’s lobby gallery series “Using Walls, Floors, and Ceilings.” The painting, titled Self-Portrait (Mom), is a canvas shaped like the artist’s facial profile that depicts his mother on the beach, her hair blowing in the wind, while wearing a pair of her son’s sunglasses.

Opening(s): “Marilyn Minter: Pretty/Dirty” and “Iggy Pop: Life Class by Jeremy Deller” at Brooklyn Museum
The Brooklyn Museum will celebrate two major openings on one night: New York artist Marilyn Minter’s traveling retrospective and Turner Prize-winning British artist Jeremy Deller’s exhibition of student drawings of rocker Iggy Pop. For the latter, Pop shed his clothes and posed for students at the New York Academy of Art. At the Brooklyn Museum, the 22 students’ 53 drawings will be displayed alongside works from the institutions’s collection chosen by Deller.

Opening(s): Ai Weiwei at Mary Boone, Lisson Gallery and Jeffrey Deitch
Not one, not two, but three Ai Weiwei gallery shows are opening this weekend. Ai will have open his first exhibition with Lisson Gallery in Chelsea, titled “2016: Roots and Branches,” featuring 16-foot-long “felled, cast-iron tree trunks” and a wallpaper installation. Meanwhile, dealer Mary Boone will show wood, porcelain and LEGO sculptures by the artist at her Uptown location and a 25-foot-tall tree at her 24th Street locale. And finally, Jeffrey Deitch will showcase a new installation of works about the Syrian refugee crisis at his Wooster Street gallery. Phew, that’s all folks!

Opening: “Ragnar Kjartanssan: Scenes from Western Culture/Architecture and Morality/World Light” at Luhring Augustine
Icelandic art star Ragnar Kjartansson will fill both gallery locations in Bushwick and Chelsea with new films and paintings. In Brooklyn, his four-channel video World Light – The Life and Death of an Artist finds Kjartansson and friends performing their interpretation of an Icelandic novel of the same name about an orphan’s tragic journey to become a poet. And in Chelsea, the artist will present nine new “cinematic paintings.”

Event: “Readings and Performances in Response to Zoe Leonard’s I want a president” on the High Line
If you’re feeling as much anxiety about this election as I am, may I suggest attending this afternoon of artists’ readings and performances to work out your feelings. Sharon Hayes, Wu Tsang and Eileen Myles are on the line-up to read and perform in response to Zoe Leonard’s mural installation I want a president, which is currently on view through November 17.

Opening: “Jonah Freeman and Justin Lowe: Paranoia Man in a Rat Fink Room” at Storefront for Art and Architecture
If you don’t have election night party plans, or even if you do, drop by Jonah Freeman and Justin Lowe’s immersive installation environment Paranoia Man in a Rat Fink Room at the Storefront for Art and Architecture before the gallery closes its doors for good. The weekend prior to the opening will be filled with performances set to take place inside Freeman and Lowe’s recreation of Jackie Kannon’s Rat Fink Room, “the first dedicated stand-up comedy club on planet earth” as it’s described in the press release, which have been produced in tandem with the New York Comedy Festival by founder Caroline Hirsch. 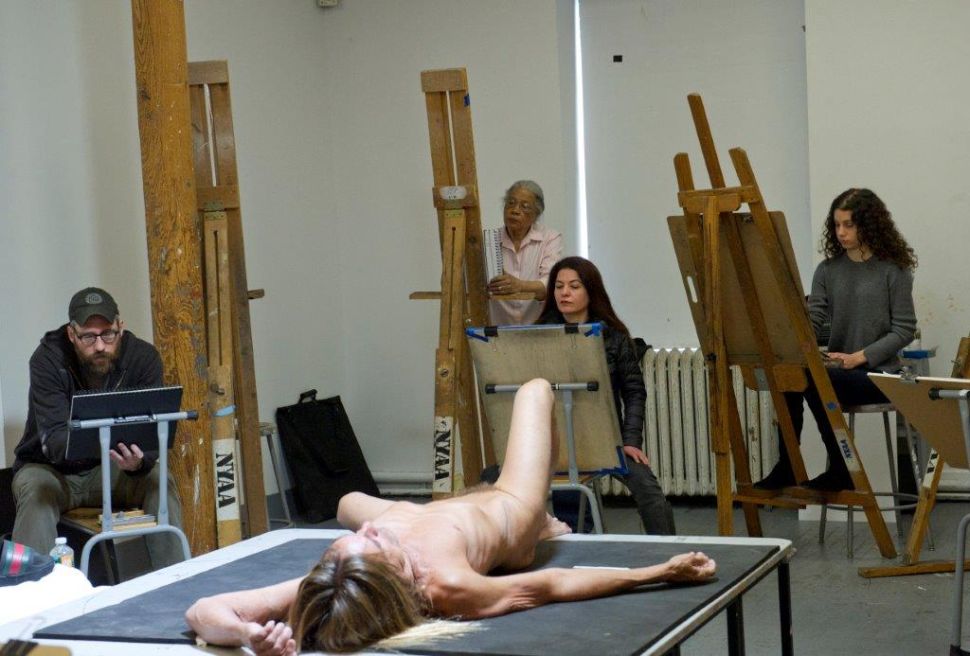