NEWARK, N.J. – The nearly 1,000 workers who descended upon Newark Airport on Tuesday to air grievances with low wages did not let the pouring rain dampen their spirits as they marched from terminal to terminal. According to those workers, the minimum wage must be boosted to $15 per hour in order to provide basic necessities and improve the standard of living for those in low wage jobs.

In Newark, marchers were outfitted with bright yellow ponchos emblazoned with SEIU-32BJ on the back, referring to the union who organized the march. At their side were a number of elected officials who support the minimum wage boost including Newark Mayor Ras Baraka, Assemblyman/gubernatorial candidate John Wisniewski, State Senator Ray Lesniak, Assemblyman Gary Schaer, East Orange Mayor Lester Taylor, Assemblywoman Annette Quijano, Assemblyman Jamel Holley and Assemblyman Nicholas Chiaravalloti.

According to Baraka, the fight for 15 is a critical one in Newark. At other New York area airports, workers are already paid $15 per hour.

“We are here in solidarity with 32BJ and all the airport workers fighting for $15,” Baraka said. “The power in our demand is that it is not unreasonable.”

Baraka also called out Primeflight, a contractor who works with Newark Airport to hire workers for not boosting employee wages or recognizing union rights.

“I stand with Newark Airport workers and the thousands of other low-paid workers across the country who are marching, rallying and protesting today. We will continue to support these hardworking men and women to ensure they get what they deserve—at least a $15 minimum wage and union rights,” Baraka said.

Wisniewski also said that the fight for 15 is critical. He said he supports the movement not only as a Democratic candidate for governor, but also as a representative in the New Jersey legislature. He said that current Governor Chris Christie’s opposition to the wage bump is misguided.

“I wanted to not only be here because I do support a $15 minimum wage but to walk with the men and women who are really fighting for their economic survival in New Jersey. If you earn $10 an hour and you pay your rent and you buy your groceries, you don’t have enough money for medicine. That shouldn’t be the state of affairs in a state as wealthy as New Jersey,” Wisniewski said.

As ralliers marched through Newark Airport, they chanted things like “What do we want? 15! When do we want it? Now!,” and “No justice, no peace,” among other things. When the protest reached Terminal C, marchers held a sit-in in the halls of Newark Airport.

Similar protests and rallies were coordinated throughout the nation as part of the national ‘Fight for 15’ movement. In addition to airport workers, fast food workers and others are also involved in the national day of action. 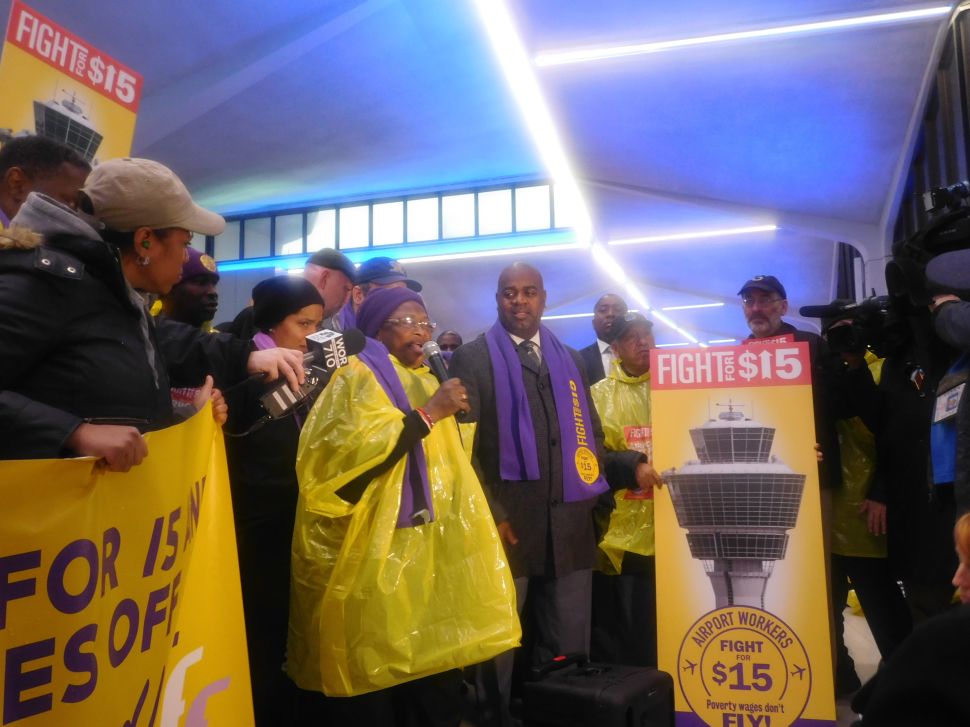